As soldiers come home, some carry the war within them

His armpits turned on like a faucet and his larynx constricted so tight it was hard to breathe. His heart palpitated hard and erratic. A numb, tingling sensation trickled down his veins. He thought he was having a heart attack. 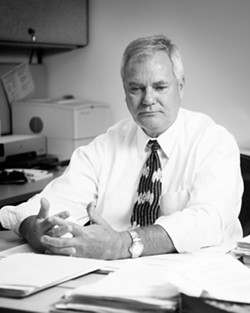 # "Cheapers" nicknamed for taking long-range shots from his sniper position during his four-year stint with the United States Army was physically and emotionally feeling the pressures and the pains of war. Only he wasn't jumping out of a plane on a night mission in hostile Iraq, he was at mass at the mission in comfortable San Luis Obispo.

Cheapers spent most of his adolescent life in SLO and recently returned to it after his tours of duty. He requested that his name not be used for this story because of concerns about violating an unspoken code of silence among the military's elite.

Many who've served time in this war have witnessed and been forced to partake in horrifying acts of violence and, as a result, their mental wellbeing has seriously suffered.

But by now the war and its emotional effects on the soldiers who served in it is old news. The media has replaced reports of overseas action with stories about trapped miners, celebrity gossip, and professional athletes' federal court cases. A recent study by the Washington-based Project For Excellence in Journalism showed that U.S. media coverage of the Iraq war has plunged 30 percent in recent months.

But for Cheapers, war will last far beyond the news coverage. In fact, it may never end.

Though he's never been clinically diagnosed, he said he's felt the effects of what's commonly known as Post-Traumatic Stress Disorder, or PTSD.

"It's a serious disorder here," said Michael Piepenburg, a SLO County Veterans Services officer. "It can be zero to 100 percent disabling. [PTSD patients] psychologically can't function, and the most severe cases have a hard time interacting with most on a daily basis."

The disorder is a mental medical condition that can disturb the normal functioning of the mind. Typically, it happens to people after they've witnessed a tremendously upsetting experience like the threat of serious injury or witnessing a death or rape.

A recent study conducted by the Department of Veterans Affairs revealed that more than 240,000 veterans were listed as having PTSD as a service-connected disability.

Some symptoms of the disorder include recurring nightmares of a traumatic event, anxiety attacks, difficulty breathing, irritability, reduced social interaction, and increased violence.

Symptoms usually start soon after the traumatic event, but they may not occur until months or years later.

According to the National Center for Post-Traumatic Stress Disorder, about half of the people who develop PTSD eventually get better. But about a third who develop the illness will carry some symptoms for life.

According to Piepenburg, the SLO County Veterans Service office files a couple of PTSD-related cases a week and handles more than 1,200 war-related claims a year. The demographic of these military servicemen ranges from those who recently served in Operation Iraqi Freedom to WWII veterans.

Most of these disabled veterans seek compensation for combat-caused damages. But in order to qualify and receive compensation, veterans must have their psychological illness diagnosed by a professional mental health expert who says the cerebral sickness was caused by military service.

If diagnosed with war-caused mental anguish, veterans can receive more than $2,400 a month. The money comes from the Veterans Administration and is tax-free.

Piepenburg said that local PTSD victims run the gamut of life "from virtually the guy next door to the guy who can't even have a lot of noise or be in a large crowd."

At first glance, Cheapers looks like Piepenburg's first example: the normal guy next door. Take a closer look and listen to him speak, though, and you might think otherwise.

Though only 23 years old, Cheapers has seen more of life's ugliness than most ever will.

While his peers were taking beer bong hits and chasing the opposite sex, Cheapers was involved in an elite special operations troop that saw a lot of wartime activity. Though he refused to discuss specifics, his off-the-record war stories were graphic, startling, and unsettling.

And because of these events, he's struggled with PTSD symptoms since his return.

Shortly after graduating from a SLO County high school, Cheapers enlisted in the Army. He had been a stellar prep athlete starring in both wrestling and football so when he arrived at boot camp in Savannah, Ga., his competitive nature led him to try out for a special operations unit.

"I wanted a challenge," he said. "It sounds stupid, but I wanted to know what I'd do, how I'd react when I got shot at."

So Cheapers and about 250 other candidates tried out for the elite unit. After months of grueling training in sweltering heat, Cheapers was one of 15 soldiers who made the cut.

Before long, he was sent overseas with his 18-year-old mind filled with patriotic thoughts of helping stabilize a horrible situation.

"When we first invaded, [the citizens of Afghanistan] were happy. They were stoked," he said.

In all, Cheapers made four tours of duty in the Middle East, and upon each return he received less of a welcome.

"I came back two years later and people were discouraged," he said. "They definitely didn't think we were helping them anymore."

Upon his return to this area, Cheapers found himself battling with his own mind.

"I had nightmares for the first month every time I returned on leave," he said.

He also suffered from social anxiety.

"Once I came back and went to church with my parents," he said. "I got scared in church in church! I started sweating. It was the crowd. I just had to leave."

But it wasn't just the bad dreams and nerves that irritated Cheapers.

"The biggest thing that pissed me off was coming home to a college town where everything is safe and everyone is happy," he said. "People were talking to me about Bush and how the war is wrong. But a week ago I was getting shot at. People only know what they see on the news. The news can say anything and people will believe it."

Many mental health experts agree that the majority of stressed-out soldiers should seek immediate professional help. Though certified emotional guidance is highly recommended by the psychological healthcare community, Cheapers said most of his fellow soldiers choose a bottle of booze as their escape mechanism.

"People deal with it differently, depending on what you saw," he said. "Sometimes I would lose my appetite for a couple days. Mostly, we just drank."

Despite the bottles, Cheapers has been able unlike some of his fellow veterans to avoid alcoholism. He's now a full-time student and a part-time bartender.

When asked what would he say to someone considering enlisting in the U.S. military, Cheapers responded, "It's their life. If they want to do it, do it."

When asked what he would say to his little brother if he were considering enlisting in the U.S. military, his response was a little different.

"I'd tell him to fuck off," he said. "There's no way I would allow my mother to go through that again."