Check out the third Annual Pugsgiving on Nov. 8 at the Pismo Beach Golf Course!

If it weren’t for a pug, I might not be married right now. Seriously! My wife, Anna, and I had only begun hanging out a bit. I met her the day after her previous relationship ended, and she was in no rush to jump into another. 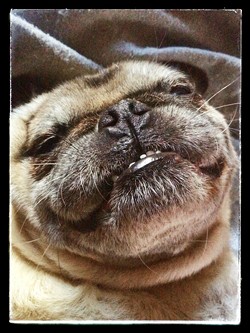 One of the things we liked to do was get our dogs together. She had (still has) a pug and a border collie mix, and I had a yellow lab and a terrier mix. One day her pug, aptly named Pugslie, got out of an open gate and was hit by a car. Anna only had a bike at the time and she called me for a ride to the vet. That sealed the deal for me. Thanks, Pugslie! You’re such a little matchmaker!

He smells, and he doesn’t listen.

My wife cleans his wrinkles and his ears with q-tips, an activity that also smells. We’re not sure if he’s deaf or just refuses to obey. He’s basically un-trainable.

My wife and I also like to pretend to talk for Pugslie, like when we’re taking all the dogs to the beach and we’re putting Pug in the back of the truck with our other big dogs.

“Why am I being placed in the rear with these filthy animals?” we vocalize for him.

Or when I toss him in the ocean, Anna will say, in her special pug voice, “Why am I being subjected to such indignities?”

Or when I feed him, “My portions seem particularly meager today, food guy. I may be unable to muster the energy to warn you of the satchel-carrying uniformed terrorist who arrives daily to attack our house.”

I always thought pugs were bred for Chinese emperors and that they ate mandarin oranges, but according to the American Kennel Club, I’m all wrong. They admit the breed’s origins are “shrouded in mystery,” but they say they date to 400 B.C. and were pets in Tibetan monasteries before becoming fashionable in Japan and then Europe.

“The Pug became the official dog of the House of Orange after one of the breed saved the life of William, Prince of Orange, by giving alarm at the approach of the Spaniards at Hermingny in 1572. Later when William II landed at Torbay to be crowned King of England, his cortege included pugs and they became the fashionable breed for generations,” according to the AKC.

Pugs are sometimes described with the Latin phrase multum in parvo, which sounds like a trip to the vet but apparently means “much in little,” or “a lot of dog in a small space.” When you think of it, pugs—especially the fawn-colored ones like ours—do look like miniature mastiffs.

Most of the time Pugslie ambles around, sniffs, and pees on stuff: “This doesn’t smell like my pee,” we’ll say aloud for him as he lifts his leg.

Every once in awhile, he’ll meet a big dog at the beach and attack it in that adorable “I’ve got an under-bite and can’t get my mouth around you” sort of way. Ahh woof! He thinks he’s a big dog.

Sometimes when I’m walking Pugslie, people will pull their cars over and rush out and ask to pet him and regale me with their pug stories.

This Saturday, Nov. 8, Anna and I will be entering into a pugnado, an apugcalypse, a pugmageddon! I expect to see a herd of pugs as far as the eye can see! From noon to 4 p.m. at the Pismo Beach Golf Course, the Central Coast Pug Rescue will present its third annual Pugsgiving, with music, a barbecue, auction, and costume contest. I think it’s going to be a blast!

You should come even if you don’t have a pug, but be warned. Keep your feet moving. Pugslie’s been known to pee on an immobile leg or two. Ahh woof!