Hayley Thomas Cain continues to work as a freelance writer and musician, only now while traveling around the country in her tricked out Dodge ProMaster van (husband and dogs in tow). She is currently looking for someone to adopt four industrious chickens. She can be reached now and forever after at hayleyvcain@gmail.com, @FlavorSLO on Instagram and at astoldbyhayley.com.

When I was first hired on to be New Times' "Flavor" writer back in June 2014, I wasn't sure I could do the job.

Sure, I had been writing professionally for small newspapers and magazines since I was 19; sure, I had been writing about SLO County wine since 2009; sure, I was born a bona fide "food person," not to mention the only child in Atascadero who might request pâté at a fast casual restaurant; sure, writing was what I knew I wanted to do for money till I croaked. 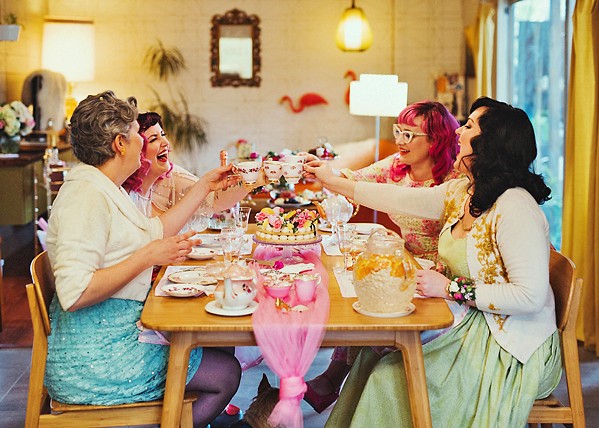 But could I really write for my hometown alternative weekly? The one I grew up reading my whole life? I flashed back to being 10 years old; the crumbs of my Benjamin Franklin Italian sub sandwich snowing down over an oil-and lettuce-splattered New Times, spread open to the movie reviews. I always liked to read those while I ate.

Fast forward a few decades. I had moved back to SLO County from Long Beach, where I'd received a dubious degree in print journalism from Long Beach City College. I was in my early 20s, playing banjo and guitar in local bands, and putting out my own art and culture zine, Swap! dedicated to SLO County's then bubbling creative subculture. I found local writers to contribute to the cramped, outspoken pages and put the booklets together myself, using my dad's old industrial stapler, left over from the days when he owned a copy shop with my mom on South Street in SLO.

In fact, I was living in my dad's basement in Atascadero, with all the trappings of a lost young person "figuring it out." At that time, I worked like a dog for the Atascadero News, Paso Robles Press, and Vino Magazine, where I had graduated from penning raccoon sightings in the Relight Roundup to something like reporter/editor/photographer/page designer (they threatened to fire me over my zine, but I called their bluff).

I drove a falling-apart 1968 Oldsmobile Delta 88 that would stall out just as I was rumbling vertically up my dad's long, steep driveway—the car that, my dad likes to remind me, was "the only thing I ever loved."

Like so many young people who return to SLO, I had burned myself out in the big city, where I had struggled, partied, worked, been fired, created lifelong friends, gathered unbelievably reckless stories I still cannot to this day believe, and eventually petered out. Like other "vintage millennials" my age, I found SLO to be a welcome tide pool during the Great Recession. It was a calm place to lick my wounds and consider growing up before heading out to sea.

But I never paddled back out. SLO County (and a local country singer) charmed me into sticking around a little longer. There was also the general friendliness and the beauty and the fact that I could play a wine bar one night and Live Oak Music Festival the next. If I was ever bored or lonely (which I most certainly was), there was the trusty New Times, containing every cool thing you'd want to do that weekend; every bluegrass jam; every important story that linked me to my fellow SLOcals.

Maybe that's why, my whole life, I always saw New Times as a magnetic force. The newspaper was a constant companion—its voice a reliable, snarky friend. It had teeth. While the general climate seemed almost too polite, New Times was sassy and irreverent and took down the powers that be with a wink and a grin.

My soon-to-be husband/charming country star Reid Cain not only encouraged me to become a full-time freelance writer (which I did, and have been, since 2013), but he also encouraged me to apply for a job at New Times, as impossible as that felt. I should say that he also inspired me—for the first time in my life—to want to cook. He didn't expect me to; it was cosmic. Something in me softened and the butter just flowed directly out of my heart.

And so, I tumbled into the oh-so pleasurable possibilities of living and nesting and eating in SLO, which are the greatest reasons to live here.

Reid's cute 1960s home near Laguna Lake soon became our home. I made the old kitchen—which featured an unfinished concrete floor, a small window over the sink looking out on an overburdened orange tree, and a can of Schlitz beer permanently embedded into the wall (leftover from some roommate)—into my first office.

This was before the place was remodeled with Madonna Inn in mind. Back then, we were too busy being self-employed musicians to care about curtains. We were working for every dollar with everything we had; he with his downtown SLO shop, Dr. Cain's Comics, and me, with my words, which I somehow managed to pull from thin air just before deadline.

Still, I somehow found a way to cook good sit-down meals every night, just like my mother had done when I was a kid.

First there were tomatoes in the garden, then chickens in the yard, then tomato-and-egg sandwiches, then all the greens I could carry home from the Madonna Road farmers' market. I was nesting while writing from that cluttered kitchen table, and still dreaming about New Times.

I had just turned 27 when I finally got that fated "you're hired" email, inspiring an immediate feeling of dread/joy. I knew this chaos in my chest all too well—like drunk, buzzing insects, an excitement that made me want to both pogo and throw up. Not unlike my first time standing up on a surfboard, going to a punk show, or eating uni.

Getting the Flavor writer job had not come easy, but it was now, incredibly, mine to gobble up.

I had officially applied to New Times at least four times in the previous two years before that happy email. I was often listed in the pages as a musical act, but that's where it ended. Even a simple press release I had submitted for an event was officially declined. The then-editor's note: "Not the right voice. Sorry."

I am not one to give up, though. A few months before I was hired, I had reached that peak moment of Zen where you've got nothing left to lose.

This was my weird plan: I would find a topic I loved (this time, a friend putting on DIY shows at a rural barn), and I would write a story about it. I would pour every ounce of my heart into that story. I would submit it. I would do it for free.

No one had assigned this duty to me, and by all intents and purposes New Times did not want what I was peddling.

But I did it anyway.

This, my friends, is the secret to every little win I've ever had in my 31 years. As I am known to say in many of my features, "Something magical happened" after.

Then Managing Editor Ashley Schwellenbach, my friend on the "inside"—decided my story was good enough to publish. They needed content, and I was working for the fabulous price of free.

A few weeks later, I was stunned to see—while strolling down Monterey Street—my feature story on. the. cover. This was almost enough for me, but I again applied to New Times, when the Flavor position opened up.

My cover letter somehow managed to tie in period food, the defunct band of a famous local brewer, and my thoughts about wine descriptors (basically, they are hilarious).

This time, New Times didn't say no. In fact, I graced the cover a second time, this time while wearing a Carmen Miranda-inspired hat dripping with sushi, lettuce, grapes, and pizza. That cover now hangs on the wall of my mom's Seattle home.

Today, I am feeling a lot like I did nearly five years ago, when I sat at a table at Kreuzberg Coffee in downtown SLO. Five cups of coffee later, I had written my first Flavor piece, about my own culinary upbringing and my love of the local food and wine community. My love is just as strong.

Fun fact: That was the only Flavor story that I have ever been "assigned to." For every deadline thereafter, I was queen of my own editorial realm, and I appreciated that (and I still do, especially today, as I write this feature, approximately 18 minutes past deadline).

As much as I've had a big mouth, and put my foot in my mouth, I'd like to say that I let the community tell me what it wanted to taste, not the other way around. I tried to listen more than I reviewed, and I tried to cheer more than I critiqued, perhaps, at times, to a fault. I am proud to say that I continued to write about the very cool people behind the food, not just the frilly stuff happening on my own "palate," a word that I still have to Google every time I use it.

Yes, I am still a terrible speller. Yes, I still cannot for the life of me make a normal looking pancake, even from a box of pre-made mix.

Schwellenbach, and later, current Editor Camillia Lanham, let me be that wild chef, the one who couldn't (or wouldn't) take direction. They urged me to write in my own voice. They believed in my taste. Both women understood my belief that "a critic" is a pretty word for someone snickering from the sidelines, while the real heroes (the restaurant owners, chefs, and farmers) risk everything in the ring.

I must also say (and she will cringe here) that Lanham has been the most judicious and competent editor/boss lady I've ever had the pleasure to work with and call friend. She is a leader, and this is war. Each week, the entire staff (and I mean proofreader Andrea Rooks to graphics guru Leni Litonjua) have gone into battle for these pages.

I am honored to have been able to work alongside these badasses of local print media, albeit remotely (I do my best work without pants, near the closest cheese source).

Yes, the culinary community has inspired me and filled me up over these years—you know that too well already. If you don't know, there's more than 250 love letters of mine floating around in the archives.

Look at us now, SLO County. How far we have come! "Farm-to-table" is now totally cliché, and there's a kombucha tap at your favorite craft beer joint.

Every day, there are new nibbles to nosh, and for that, we should all be grateful. From a swearing, sweaty chef in the kitchen to picture-perfect plate, from the almost-extinct honeybee to dripping golden ooze, from scribbled notes to newsprint (old fashioned, but still kicking)—it has been my privilege to report on—and to create—something worth consuming. Δ

Hayley Thomas Cain is heading on down the road, out of town, and in a Dodge. Send your deviant thoughts, delightful recommendations, and delicate tastes to clanham@newtimesslo.com.