In addition to serving its own Seven
Sisters-inspired brews, 7Sisters Brewing
Company has other local brewery and
cidery offerings on its taps, including
Two Broads Ciderworks of SLO and
Naughty Oak Brewing of Orcutt. Check
out the event calendar this winter: It's
chock-full of happenings, including open
mics, Friday pint nights, a monthly comedy
night, Wednesday Irish music performances,
and more. The brewery is located at 181 Tank
Farm Road in San Luis Obispo and open Tuesday
through Thursday from 4 to 9 p.m., Friday from
4 to 10 p.m., and Saturday and Sunday from
2 to 10 p.m. For more information, call
(805) 868-7133 or go to 7sistersbrewing.com.

San Luis Obispo's "Seven Sisters" are more than pretty places to hike and snap sweaty selfies. They are relics from our ancient past, quietly reminding us that time marches on ... and on, and on. The chain of volcanic mountains and hills located between Morro Bay and San Luis Obispo were created more than 20 million years ago during the Miocene Epoch of the Neogene Period (don't worry—you will not be quizzed on this).

Looking out across our serene sisters on a clear day, it's hard to believe these oak-covered vistas were once volcanic masses of impossibly hot magma. It's weird to think that the smoldering plugs eventually cooled and solidified inside softer rock, which has since eroded away.

This may severely depress or totally inspire you. Either way, it might make you want to cheers with your buddies and enjoy this landscape while it's still ours. 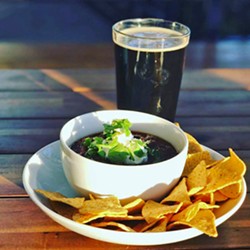 His new brewery and taproom, located off Tank Farm Road, is currently serving up "seven beers for seven sisters" every Tuesday through Sunday.

For Van Middlesworth, a connection to nature doesn't stop at a cute name (or seven). He is sincere about his impact on the Earth and wants to share this reverence with patrons.

I mean, what else would you expect from a longtime environmental engineer?

"We are crazy for compost here, composting everything from our spent grain to our kitchen scraps to our palm leaf plates," Van Middlesworth writes on the brewery blog. "We even use compostable straws instead of plastic. Our waste goes to SLO's community compost program, where it will eventually nourish locally grown crops."

According to Van Middlesworth, on average, breweries consume between four and six pints of water for every pint of beer produced. Not great for Momma Earth. So, he looked at every aspect of the brewing process, from brewing to cooling to cleaning, and re-engineered it to use far less water—about two pints of H20 per one pint of beer.

If you know this guy, this does not surprise you one bit.

Energy inefficiency is another pet peeve for Van Middlesworth, who worked tirelessly to design a hybrid natural gas and electric brewing system.

"It takes advantage of the most efficient properties of each system while minimizing the less efficient aspects. It costs a little more, but we think it's worth it," he added. 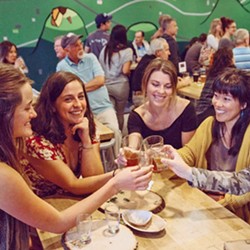 To that end, every light bulb in the brewery is a dimmable LED. When you walk into the well-lit tasting room, remember: All these lights combined use about as much electricity as two 60-watt light bulbs.

Of course, the décor boasts an equally tiny footprint: The patio is landscaped with drought-tolerant plants from Native Sons Nursery in Arroyo Grande, and local artist Isaac Yorke installed the spray paint mural. Much of what you see, touch, and feel was built from recycled materials.

Even the brewery's T-shirts and hats are made by a friend working just a stone's throw from the brewery's front door. Food is always (and he means always) sourced locally from businesses like Central Coast Creamery, Alle-Pia Fine Cured Meats, Back Porch Bakery, and Spice of Life, among others.

Think we've hit the top of the "SLOcal" thermometer? Well, did I mention that all 7Sisters servers are Cal Poly alumni or current graduate students? The brewer is nothing if not consistent. Very consistent.

You may have guessed it already, but yes—Van Middlesworth is a military man. Born in Indiana, he came from a military family and moved around a lot. Later, in the Air Force service and civilian service, he lived in Germany, England, Colorado, California, and New Mexico. You might have assumed, as I did, that this taste for beer came from these extensive trips. It was actually born of neccesity.

"I became a home brewer 27 years ago because I found I had a taste for decent beer, but not the pocketbook for it," he said, adding that this was way before the craft beer explosion, when microbrews went mainstream.

About 10 years ago, Van Middlesworth settled in SLO County. It remains the longest residence he's ever held.

"I came to the Vanderberg base to work on a project and I found I loved the vineyards, wide open space, weather, and people seemed really nice," he said. "This was where I always truly wanted to end up."

Amazingly, Van Middlesworth still works at Vanderberg as chief of asset accountability in civil engineering. If that sounds like a lot of paperwork, you are correct.

"That's what drives me more and more to brewing," he said with a laugh. "I am coming up on retirement, and I'm looking toward my next career." 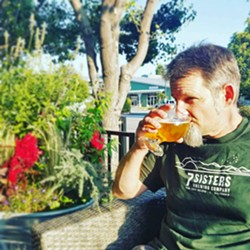 His "build it and they will come" mentality is slowly working, but you won't have to fight to order a beer flight at the bar. As a builder, thinker, and systems guy, he has not yet tackled the massive learning curve known as "social media marketing."

This is a good thing! Hear me out.

Swing by the brewery for yourself and experience the relaxed environs. You'll get it. Van Middlesworth is not aiming for "hip." He instead aims to serve the locals who are irked by thumping downtown clubs, too-loud dives, and taprooms where you have to deploy a kidney punch just to order a drink.

Where else can you grab a brew for yourself and a root beer for the kid? Where the patio is dog friendly and you can choose from more than five gourmet grilled cheese sandwiches? Where you can actually have a conversation with the person sitting next to you?

Is this not the local dream we each hold in our heart?

Efficient as always, Van Middlesworth summed it up in just six beautiful words: "I am here for the locals." Δ

Hayley Thomas Cain is still thinking about fiery, hot magma. She can be reached at hthomas@newtimesslo.com.