Chef Antonio's Italian Kitchen is open for Wednesday dinner delivered to you. Find the menu and order at chefantonios.com and look for @chefantoniositaliankitchen on Facebook and Instagram.

Antonio Ramos III was helping to build a shed in his brother's backyard during the beginning of the COVID-19 pandemic, when he had a vision.

"This could be my pasta room, my little pasta laboratorio," Ramos said. "So we built it out. ... And by August, I was like, 'Let's just start doing dinners.'" 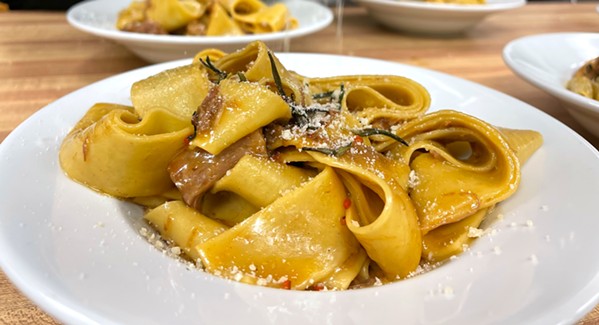 So he did that, too, hosting private dinners in his parents' Santa Maria backyard for family and friends with his fresh, handmade pasta. After a little while, Ramos found a commercial kitchen to use at Camp Arroyo Grande, making dinners on weekend nights for outdoor diners who found their way to the 30-acre facility close to The Village.

Around October or November, Ramos started to set his sights on opening a restaurant, but as the COVID-19 pandemic resurged in California, outdoor dining closed again. However, he's keeping his dream alive through Chef Antonio's Italian Kitchen (Instagram, Facebook), which delivers fresh pasta dinners to doorsteps from San Luis Obispo to Santa Maria on Wednesdays with the potential for a weekend night in the near future.

Dinners come with a salad—on Feb. 10, it was a kale Caesar salad with shaved parmigiano-reggiano and garlic croutons—dessert—almost always chocolate budino with toasted walnuts (from Arroyo Grande) and Maldon Sea Salt, and some rustic garlic bread. The pasta special changes weekly, and the options are endless.

Pappardelle with pork ragu or mushroom and kale.

Ravioli with smoked hen and prosciutto or fresh lemon ricotta.

Since the beginning of the pandemic, Ramos and his wife, Elise Raviv, have had quite a journey. After he lost his restaurant job in New York City, and Raviv took a forced hiatus from her job as a nanny, they left the city—pit-stopping in Maine before coming to the Central Coast.

From December 2019 to February 2020, Ramos said, it was as if everyone in New York City was already sick. They knew that COVID-19 was coming.

"Restaurants were already closing before it was announced in New York, because everybody already knew," Ramos said. "We got out right before it ended up happening. ... I was just thinking, let's just get out of the big city."

So they headed to Raviv's parents in Maine, where they stayed for a little while until things got a little cramped. As the pandemic saw no signs of letting up, Ramos said they decided to move back to where he grew up. Ramos graduated from Ernest Righetti High School and worked at Shaw's Steakhouse & Tavern in Santa Maria before moving to San Francisco and then New York.

In 2014, he started working at Flour + Water in San Francisco. Executive Chef Thomas McNaughton had recently published Flour + Water Pasta, a book Ramos described as the "definitive culinary pasta cookbook." Although McNaughton was touring the country for his book at the time, Ramos started learning the ins and outs of the pasta business from the Mexican family that was at the center of the restaurant.

"I just stuck around and got into it. I just loved the organization. ... I learned whole animal butchery because they would do a whole pig," he said. "Just doing everything the real way, you know, everything from scratch. ... And they were just so good at doing a massive amount of stuff every day."

It was the culture that raised him in the kitchen, he said. And he stuck with the pasta business from that day forward. Ramos said almost every restaurant he worked at over the last seven years was Italian, including Misi and Charlie Bird in New York City.

Now, Raviv and Ramos are in San Luis Obispo chasing two dreams: starting a family and opening a restaurant. Raviv and Ramos got married on the Central Coast in 2020, and she's pregnant. Although the plan wasn't necessarily to open a restaurant so quickly, making food was a pull that Ramos couldn't shake. He missed the busyness of cooking in upscale restaurants and he missed making food for others.

As doors started to open for him on the Central Coast, he chose to walk through them, from serving dinners in his parents' backyard to getting the opportunity to cook in Camp Arroyo Grande's commercial kitchen.

He said he approached the new challenges of opening a food business just like he had everything else in his life.

"Like, OK, I don't know anything about business; I'm just going to get it done. Just like cooking. There's a recipe, just do it," he said.

So they got a catering permit, a California seller's permit, a fictitious business name, and a business bank account. They started to meet local producers who could provide fresh eggs, produce, and meat. They searched for the perfect flour. And, Ramos said, he kind of just let things happen as they happened.

So while the restaurant industry on the Central Coast had to close dining again for a couple of months, Ramos said it came at the perfect time, allowing them to rethink what they wanted and move forward with a plan to make the dream happen.

They found a commissary kitchen in San Luis Obispo that's close to home, and for now, Chef Antonio's Italian Kitchen is a delivery-only service. They post the meal for the week on the website, and people can preorder. Ramos and Raviv do it all: prep the food, cook it, and deliver the dinners.

The couple will be taking a 40-day break once the baby arrives at the end of March, but Ramos said his pasta dreams are just beginning. He's looking for the right space, a small sushi-style bar with a few counter seats and a couple of tables.

"I'm hoping for a miracle, that someone will just say, you know what, I know the perfect space that you could work at," he said. "I just wanted to cook for people, you know, so however I can make that happen." Δ