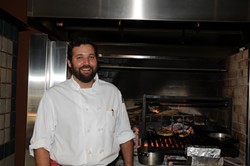 Once word got out that chef Brian Collins was opening a new restaurant in Arroyo Grande, the news spread rapidly throughout the Central Coast. With no notice to the media or public, it has served a record number of diners ever since the day it tried to open quietly on Feb. 5. It’s not a large restaurant and bar but it can comfortably seat 100 people. Here’s the surprise: Those tables are turned over at least three times every night they’re open. I doubt the numbers would differ if it opened seven nights a week. It’s filled with locals from SLO and Santa Barbara counties that include chefs, winemakers, foodies, and some who are just plain curious.

There are plenty of reasons for the excitement over dining at Ember, so named because everything is cooked over fire. I can say from experience, this restaurant is no one-hit-wonder. It was created by a very talented chef who shared his dream with his wife, Harmony, and together they made it come true. They had a lot of help from their families, too.

Watching the enthusiastic diners, it seems that Ember has cast a spell on the Central Coast. Diners willingly queue up for an hour if they arrive after 5 p.m. My first Sunday visit, I thought 4:20 p.m. was early enough, but the dining room was already full, so my husband Dan and I dined in the bar. I’m too impatient to wait in line. So are many others whom I tell to get there early or get there late to avoid the wait.

Because of Collins’ steadfast ethic, everything served in this eatery is housemade from the freshly baked levain bread to the pastas, sauces, dressings, dips, and desserts. Collins hand-selected his team of cooks, and he confidently said of them: “They’ve got my back.” His team of cooks can expertly reproduce his menu whether he’s standing at the helm or not, and I learned while cooking professionally, that’s rare. Collins has established a unique following that few chefs ever earn, and those fans will follow him anywhere. That’s why he could open in a location some people saw as jinxed, and make it a destination for fine dining.

Collins’ composed nature and innate cooking talents are the reasons I respect him so highly. We have one thing in common that led us to our current jobs: We were both inspired by the awesome culinary legend Alice Waters at Chez Panisse in Berkeley. But he was given the opportunity of a lifetime; he was hired by Chez Panisse.

His story began when his mother, Karen Moscatelli Collins, found a cookbook she knew her son, the aspiring chef, would enjoy. The Chez Panisse Menu Cookbook, by Alice Waters cost her $2 in a second-hand store. I wonder if the thought crossed her mind that it would have an amazing impact on his career. An Arroyo Grande native, he and his wife Harmony were high school sweethearts. At the age of 22 he moved to the Bay Area to attend the California Culinary Academy (CCA), while Harmony studied to become a registered nurse. Their daughter Emma was 1 year old. 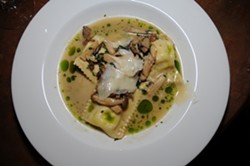 “While reading the Chez Panisse cookbook, I thought what an amazing place,” he remembered. At the time Collins was enrolled in the 16-month curriculum at the California Culinary Academy (CCA) in San Francisco. “Ten months before graduation, I went to Berkeley and knocked on the back door at Chez Panisse to see if I could do my internship there.” Chef Gilbert Pilgram checked his books and told Collins, “You just made it; I have one slot left for next year.” Collins worked free one day a week to gain more experience. Passion, determination, dedication—these are the tools necessary for learning if you dream of becoming a star in the culinary world.

“The moment I first walked into the kitchen at Chez Panisse, I thought it smells so good, I wonder what they’re cooking? My first day at work, Alice walked into the kitchen. She was visionary, and when you worked for her she would share her philosophy about food and cooking. She knew what her food should taste like and she had a great palate. She would come through and taste everything, and tell us exactly what was missing. We always cooked with the seasons, not being afraid to improvise, and everything was made from scratch.”

Collins’ passion and willingness to learn, even on his own time, earned him a full-time job at Chez Panisse. He was quickly promoted to the lead line cook position. He stayed with Alice and her extraordinary kitchen team for five years. He left once he decided it was time to return home with Harmony and Emma to work toward his new dream—establishing his own restaurant in Arroyo Grande.

When the Collins returned home in 2005, Windows on the Water chef Pandee Pearson immediately hired him as sous chef. In 2006, Executive chef Evan Treadwell hired him as sous chef to help open Lido at Dolphin Bay.  Two years later, Collins moved to Full of Life Flatbread in Los Alamos where he felt at home.

“There was a big difference at Flatbread. It was focused on what I was trained for at Chez Panisse,” he explained. Calling it a little oasis in the middle of nowhere, Collins found it satisfying to produce a new menu daily featuring the freshest foods from Central Coast farms.

Collins carries more weight on his resume than any other 36-year-old chef I’ve known, and yet remains humble and highly motivated. He has indeed brought a taste of Chez Panisse to SLO County. Every meal at Ember has impressed me with its quality, and I’ve been raving about it. Come back next week for my full review of Ember.