"I've heard for years what a 'culinary wasteland' Santa Maria is not so," insisted Chef Rick Manson of the crowd-pleasing Chef Rick's Ultimately Fine Foods in Orcutt, a hamlet locals usually refer to as Santa Maria. "There are many restaurants and food haunts in my home town that serve and sell great food." And with that endorsement the chef magnanimously invited me on a culinary tour of Santa Maria that I accepted with unbridled enthusiasm. I knew Chef Rick's tour would lead to some delicious treats such as the spicy bacon-wrapped shrimp with chile relleno, but I never imagined oddities like the jellied mutant coconut. 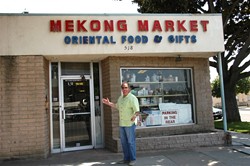 # OK, I held back from telling the chef that I'd said the same thing about Santa Maria many times. When asked, I always told people that Chef Rick's is the only great restaurant there. No local secret, it's a favorite of everyone from local foodies to celebrities from L.A. like the members of Metallica and Tom Petty and the Heartbreakers who always stop there when headed north on Hwy 101. In fact every person I told about my upcoming culinary tour with Chef Rick said they wanted to come along. When I was a guest on Dave Congalton's show (KVEC 920 AM) a week earlier, he acknowledged what an extraordinary treat I'd been offered and said he looked forward to reading my report.

When the grand day finally arrived I was thrilled to see the chef's handwritten list filled with an array of interesting restaurants covering everything from breakfast spots and Mexican cafes to Asian buffet and the ubiquitous Santa Maria barbecue.

"Some of these restaurants serve on paper plates (Chef Rick's did its first three years), some aren't restaurants at all, and most could care less about some new trend, new style, new reduction of biodynamic herb foam mish-mash with a pea tendril of the Food Network generation," the affable chef quipped. "They just serve some of the tastiest heart and soul food available anywhere and I'm happy they are here."

We started with a short stack of pancakes at Kay's Country Kitchen in Orcutt, deciding we should share since we planned to try something at each restaurant. The old-fashioned decor reminiscent of grandma's kitchen is cute and the place was packed. No surprise, greetings from the staff and diners rang out to Chef Rick just as rockers would cry out if Tom Petty walked in. I found the young staff quite friendly but the pancakes didn't compare to my scratch recipe. Rick admitted he'd been served better there and recommended the enchilada omelet for another visit.

Our next stop, El Pollo Nortendo, where we ordered the roast chicken and tri-tip plates, both served with pinto beans, salsa and tortillas. I'm not big on tri-tip but admitted theirs was pretty tasty and not overly chewy. The chicken was best and Rick recalled trying to get the recipe because he couldn't quite figure out every ingredient in the marinade. "I tried to bribe Felipe the cook with a gift certificate for Chef Rick's and a T-shirt," Rick laughed, "but I found out he's the owner's son-in-law and he wouldn't give it up." Dining here is strictly fast food style to which Rick confessed he usually orders take-out to enjoy the food at home.

# At the Mekong Market, Rick called it "Asian food unleashed." We looked over an amazing array of Japanese, Chinese, and Thai foods. The 20-year-old store opens daily to offer rare and interesting ingredients like frozen pig's blood, canned mud carp, and ground dried fish by the pound. While normally tempted by "interesting" foods, they usually just sit in my cabinet aging past their expiration date until they're too scary to dare eating. Although I am a foodie I'm not adventuresome enough that I can imagine developing a craving for jellied mutant coconut. But with our appetites whetted, we found a wonderful treat at Saengs' Kitchen in their fresh spring rolls with shrimp, crispy veggies, rice noodles and herbs in steamed rice paper with a delicious salty/sweet dipping sauce.

I'd driven past El Toro Market for a decade and never stopped, so the sight of towering stacks of tortillas and pigskins and tubs of guacamole was amazing. Rick described it as a huge deli with everything for sale including everything inside a pig. I giggled when he questioned, "Who's eating all that pig skin?"

My favorite restaurant of the trip was our last stop at El Herradero. After all that food, I couldn't resist this restaurant's crispy bacon-wrapped prawns, and I normally don't like bacon wrapped around anything but eggs. The Mexican rice and frijoles were perfect and service just what the menu promises: "We are here to serve you."

Talk about heart and soul I really appreciated Chef Rick's loyalty to his neighbors. And all of these small family-run eateries put out a tasty meal at value prices. Of course when people ask me where to eat in Santa Maria I'll still have to say Chef Rick's rocks.

SIDEBAR: The stops on the tour

Talk about a great trip and while I liked every restaurant we tried I can't wait to return to El Herradero. After years of being asked "what's the best Mexican restaurant?' I can finally say I've found it thanks to Chef Rick. 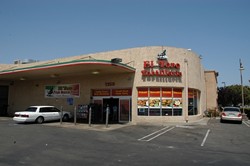 Chef Rick's wins the best restaurant award every year in the Santa Maria Sun - and he earns it for his consistently great foods. Check out his funky purple napkins at: 4869 S. Bradley Rd., Orcutt, 937-2273.