Blue Moon Over Avila's new sister restaurant, Louie's at the Beach, is located steps from the sand on 468 Front St., Avila Beach. The dog-friendly, breezy California-style beach bistro serves shareable snacks, artisan sandwiches and flatbreads, fresh salads, homestyle desserts, local beer and wine, cocktails, and adult root beer floats. Louie's is open daily from 11:30 a.m. to 9 p.m. Call (805) 329-5666 for reservations or to schedule a private event. Visit Louie's at the Beach on Facebook, on Instagram, at louiesatthebeach.com, or at 468 Front St. in Avila Beach.

Louie's at the Beach is so charming, I'm just gonna die.

I've seen "beaches gone wild" in restaurants on the beach before. You know the ones—they look like a Malibu rum and coconut-fueled cocktail hangover in Margaritaville. But Louie's at the beach is not that. Beach basket lighting, sandy-colored ceilings, and earth-tone rattan chairs with comfy patterned pillows. Patio tables tuck into little nooks along the green and white cottage building, surrounded by rows of greenery.

Chef Steven Lucero, who goes by "Big Steve," heads the kitchen at Blue Moon Over Avila, a wine bar and French Bistro. Lucero is also the man behind the casual, laid-back California Coastal cuisine restaurant, Louie's at the Beach, next door. Lucero is known for his innovative dishes and fresh ingredients. He also runs a non-hostile kitchen. His dishwashers become line cooks. He likes to teach humility and hard work.

Big Steve is an all-around good guy, if you haven't heard the news already.

Our friendly waitress Storey (who deserves kudos for taking on the whole room easily on this recent Saturday night), said Lucero and his culinary team make most of the Louie's dishes, which serve 10 or so tables, from Blue Moon's kitchen. The owner, Nancy Bell, took over the lease of a wine bar that used to be where Louie's is now. We could see Lucero's cooks from a window and open door that led to the Blue Moon. 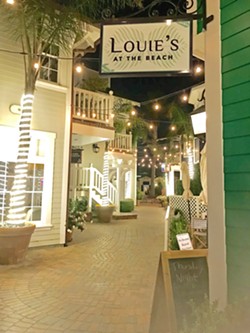 "Since Blue Moon was so special and unique in its own way, and a little high-end, I wanted to make Louie's more casual," Lucero said. "More [of a] family environment. Good food, but stuff you can't normally get anywhere else."

From what I gather, Lucero's grandmother fostered his passion for food during summers and on holidays. Lucero would sit and watch cooking shows with her, fascinated by the things chefs would create with food. While studying at Le Cordon Bleu in Pasadena, he worked closely with a chef specializing in Israeli and kosher cooking. By 2007, Steve was cooking on the Central Coast, collecting ideas and learning from some of SLO County's top chefs.

Lucero said he and the management and owner want people to come by and have a beer and some food, watch the game, and take down their stress levels. "We're just trying to keep it fun," Lucero said with a laugh. "Not serious. I already have enough serious next door."

Louie's at the Beach is named after Bell's pet beagle, who strolls outside the bistros and basically falls in love with everyone he meets. Louie the Beagle is behind the whole "pet friendly" concept at Louie's at the Beach, and if you and your furry friends would like to thank him for that, be sure to bow to Louie's Jerry Scott-painted portrait that hangs above the dining area. Or simply pet the guy next time he saunters up to your breezy outdoor table.

"Ah, he's an awesome dog—I wish I could take him home," said Lucero, who has a Chow himself. "I got it all," said the father of four kids (ages 6 months to 13 years) and two restaurants. Lucero's wife works in the biz as well, managing a catering company in SLO.

The menu consists of starters and snacks, salads, share plates, and house-made desserts with quality, local ingredients (like the split-top bread in the lobster roll from Edna's Bakery, and much of the seafood from Santa Monica Seafood). Lucero said he will be bringing "funky grilled cheeses" onboard soon, so stay tuned.

My husband and I started with the French onion soup and ceviche, and then we shared a flatbread pizza.

The wine list contains local wines, beers, and ciders, and a dozen fun cocktails like a Sabe Rita (Sabe is blanco tequila and premium sake) and a Dolin (vermouth) Sunshine Spritz.

The French onion soup was full of flavor: We tasted the creamy mushrooms and soft, caramelized onions in dreamy spoonfuls. Served in a steaming ceramic soup mug and topped with crostini, cream, and melted, nutty Gruyère cheese, I was glad to sit by the open door and feel the cool sea breeze as I was comforted and warmed by the soup. The marinated shrimp ceviche was served in a martini glass, and it was refreshingly bright with fresh heirloom tomatoes, cucumbers, cilantro, avocado, corn, serrano chili, and Clamato juice. 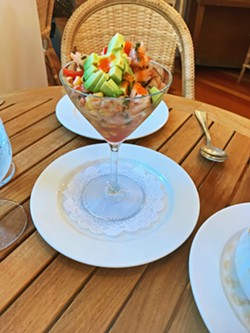 We took on Louie's poke bowl with ahi and the wood-fired flatbread with peaches, ham, Gorgonzola cheese, caramelized onions, and fresh basil. The ahi came in generous cubes over avocado and jalapeño, brown rice, and vegetable slaw. The dish tasted healthy, so most of my attention went to devouring more than my share of the flatbread, which tasted like a sweet and savory daydream.

"Did I eat too many?" I asked my husband Greg.

"You know exactly what you did," he told me.

Flavor writer Beth Giuffre regrets nothing and is happy to be in Louie's doghouse. Send more flatbread and story tips to bgiuffre@newtimesslo.com.