From archaeology and ancient empire languages to football science and parliamentary procedure, Doctor Chess teaches it all. For more information, visit doctorchess.com or contact Robert Holland at (805) 481-4627 or doctorchess@doctorchess.com.

Chess pieces wobble back and forth as fourth grader Avery Connell adjusts her cat-eared headband, pulls on the sleeves of her unicorn sweatshirt, and maneuvers from sitting to kneeling, eyes never leaving the game on the table in front of her. The fidgeting is constant, but so is the focus. 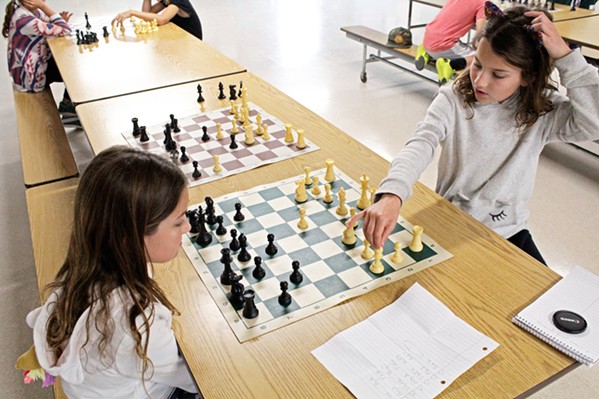 Cameron, Avery's twin sister and most intense chess competitor, sits on the opposite side of the table, watching closely.

"We usually don't play together," Avery says, "because it ends up in a 50-move war."

But in this particular game, the twins aren't competing; they're on the same team, along with several other Shell Beach Elementary School students who meet up on Wednesdays for an after-school program that revolves around all things chess.

Avery makes her final move after a few more seconds of thought and some consultation with Cameron, and then the girls call over the program's director, Robert Holland, known to his students as Doctor Chess.

Holland pulls out a sheet of paper listing the codes for a series of chess moves—"Pe4," vs. "Pg6" and so on—and records Avery's move. After today's session, he'll be emailing the single move off to Germany, where a former chess student, Justice Eggers, now lives.

Eggers was one of Holland's best chess students until he moved to Germany with his family in the spring of last school year. Eggers was nervous about leaving his friends and the chess program behind, Holland says, so the class decided to start a long-distance, international chess game between Eggers and all the other students.

The students take turns making a single move each week. That move is recorded, sent off to Eggers via email, and then Eggers responds with his own play before the next session.

It's a slow way to play the game, Holland says, which can be both challenging and beneficial, especially for the newbies in the class. It requires a certain amount of attention but allows for long-term problem solving and strategizing, and Holland says it's similar to how chess was commonly played through the post between long-distance friends—that was before cellphones and the internet existed.

Some of those games lasted for years, Holland says, and this one will likely play out well into next school year. The kids are clearly enjoying it—most can't wait for their next turn.

"There's a real addiction to the problem solving," Holland says, looking out at the handful of students who have all now moved on to their own separate games.

Some are playing the familiar, traditional game of chess we all know, and others are working on drills together that center on specific pieces. That allows the beginners to get a better grasp on how each piece works and all they can accomplish alone.

"I teach them how to play," Holland says, "and then how to win."

Before class ends, Holland asks his students if there's anything they'd like to ask Eggers. Questions come from various corners of the room: Has he learned German yet? Has he made any new friends?

The game with Eggers in Germany is fun, but it's also a great way for all the students to correspond, Holland says—and even better that it's through the game that brought them all together in the first place.

• The Rice Partnership, in conjunction with Glenn Burdette, is hosting a Lunch and Learn on Nov. 21 at Cafe Roma in San Luis Obispo. Glenn Burdette's tax managers and a couple of CPAs will provide background on and strategies for navigating the Tax Cuts and Jobs Act, among other end-of-the-year tax planning issues. The complimentary luncheon will begin at noon and is open to individuals and business owners. It will conclude with a 2020 Market Outlook from The Rice Partnership's Tony Brizzolara. To RSVP, email ashley@thericepartnership.com. Δ