Saturday in the Park,” “Colour My World,” “Feeling Stronger Every Year,” “Wishing Your Were Here,” “If You Leave Me Now,” “Hard to Say I’m Sorry,” “You’re the Inspiration”—I could go on, but you get the idea. Chicago has been a hit machine since the ’60s. They’ve sold more than 100 million records, won a Grammy Award and two American Music Awards, have a Hollywood Walk of Fame Star, and were inducted into the Rock and Roll Hall of Fame this year. They’re also playing Vina Robles Amphitheatre this Wednesday, June 29 (8 p.m.; all ages; $42 to $92 at vinaroblesamphitheatre.com).

Schoolmates Terry Kath (guitar, vocals) and Walter Parazaider (woodwinds, vocals) originally formed the band, calling it the Big Thing. They changed their name to the Chicago Transit Authority, and later just to Chicago, and added more horns with Lee Loughnane on trumpet and vocals and James Pankow on trombone, creating the same sort of rock-band-with-horns sound employed by Blood, Sweat and Tears. Peter Cetera and Robert Lamm rounded out the group, as well as drummer Danny Seraphine. Today the group still has all three original horn players as well as Lamm.

Their peak years were definitely the ’60s, ’70s, and ’80s, but they’ve had a top 40 album every decade they’ve existed (a rock ’n’ roll first!) and they’ve toured every single year since the beginning. This is a well-oiled machine!

Their most recent album is Now Chicago XXXVI, featuring 11 new songs recorded live on the road. The band travels with a state-of-the-art recording system as well as “an online collaboration portal that allows even more performances to be worked on around the clock from remote locations,” according to press materials.

The current band also includes Jason Scheff on bass and vocals, Tris Imboden on drums, Keith Howland on guitar and vocals, Lou Pardini on keyboards and vocals, and Walfredo Reyes Jr. on percussion. Special guest Rita Wilson will open what promises to be a very special show.

Douglas Benson might not be Johnny Cash, but he’s about as close as you’re likely to find these days. Fronting the San Diego-based Johnny Cash tribute band Cash’d Out, Benson has the look, the mannerisms, and most importantly the voice. It helps that bandmates Kevin Manuel on guitar, Ryan Thomas on bass, and George Bernardo on drums really understand how to re-create that early Sun and Columbia Records sound. 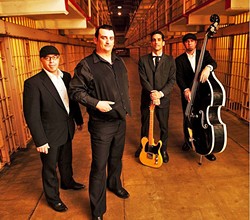 This Friday, June 24, Numbskull and Good Medicine Presents bring Cash’d Out to Tap It Brewing Co. (7 p.m.; 21-and-older; $15 presale at ticketfly.com or $18 at the door). The band has won six San Diego Music Awards for Best Tribute Band, but the real hallmark of their authenticity is how Cash’s inner circle has responded to their shows.

“Cindy Cash came to a show, we made her cry, and she gave me a necklace with Johnny’s hair in a glass locket,” Benson explained in press materials. Cash producer Lou Robin has also been to several Cash’d Out shows, and said that if he closed his eyes it was like “going back in time.” W.S. Holland, Cash’s longtime drummer, sat in with Cash’d Out at a birthday celebration for Cash hosted by Bill and Shannon Miller of JohnnyCash.com at the Fender Museum in Corona, Calif. “And Bill let me play Johnny’s cherry sunburst Guild guitar,” Benson added.

Since they formed in 2005, the band estimates they’ve played before 1.2 million people, and they have about 150 Cash songs in their repertoire—mostly the early stuff. From “Cry! Cry! Cry!” to “I Walk the Line” to “Ring of Fire,” Cash’d Out will take you there.

Numbskull and Good Medicine Presents take over Tap It Brewing Co. the following night on Saturday, June 25, when Matt Costa returns to the area (7 p.m.; all ages; $20 presale at ticketfly.com or $25 at the door).

The skater turned singer-songwriter got his start 13 years ago when No Doubt guitarist Tom Dumont discovered his music and helped him record his first EP. He ended up on Jack Johnson’s Brushfire Records, eventually recording four full-length CDs, but in 2015—now label-less—he decided to try something different. 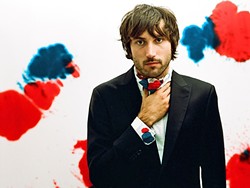 “Putting a record out every two to three years is a little unsatisfying for me,” Costa said in press materials. “I want to put something out more consistently, on a regular basis, because I feel like it forces me to evolve.”

Costa decided to write and self-release five EPs, “each unique in style, approach, and concept.”

“It’s more of an exercise in writing songs and pushing myself to have a goal,” Costa said. “I’m always writing different kinds of songs in whatever the moment may be, and a lot of times I don’t know where to put them. It’s easier to start placing them in these smaller batches than thinking of a big full-length record like I’ve always done. And so I thought, ‘Why don’t I put them out like that, and let it be what it is and not have the pressure of a big record?’ It’s more revealing of the creative process.”

Diverse, creative, and innovative—Costa proves you don’t need a record label or to label your music, whether he’s playing “Ark Song,” with its slack de-tuning and Hawaiian and calypso rhythms, or the psychedelic jangle of “Green Devil,” it’s all good music.

Popular Arroyo Grande resident Samantha Michelle Ford may have lost her life to cancer in 2010, but the former dancer and inspiration to many continues to inspire with an annual benefit concert in her name. The fourth annual Remembering Sam Ford Benefit Concert happens this Saturday, June 25, from 3 to 7 p.m. at Branch Street Deli in the Village of Arroyo Grande. Proceeds create scholarships in Sam’s name for young dancers at The Studio of Performing Arts in Grover Beach, Sam’s childhood dance studio. In addition, a portion of the proceeds will be donated to The Pablove Foundation, which funds pediatric cancer research and advances in treatment; educates and empowers cancer families; and improves the quality of life for children living with cancer through hospital play, music, and arts programs.

Branch Street Deli has generously donated their outdoor patio for the event, and 10 percent of all food and drink sales go to the Remembering Sam Ford fund.

The concert features an acoustic line-up of local musicians including Nataly Lola and Mid-Life Crisis, as well as a special performance by dancers from The Studio of Performing Arts. Remembering Sam Ford organizers will be selling Remembering Sam Ford T-shirts, tank tops, sweat pants, tote bags, and bracelets. In addition, raffle tickets will be available for purchase for the chance to win prizes from local businesses.

Sam inspired her fellow dancers and the community when her leg had to be amputated to lessen the chance of cancer returning, but she returned to dance on a prosthetic leg. She had a lot of heart, saying in a 2006 interview, “God has made me strong in order to help others who are weak. I hope that I inspire people to live their lives to the fullest because you never know what will happen to you. As far as continuing to dance and teaching dance, I wanted my students to know that no matter what, if you love something and are that passionate about it, then do it and don’t hold back, despite any odds. I can’t help but think about how different my life would be if none of this had happened. Where would I be? What would I be doing? Who would I be? Before all of this happened I wanted to be a professional dancer, but now those dreams are gone ... God has a different plan for me, and that is OK. I have never complained, and have never felt sorry for myself because I know that there are other people in the world that are far worse off than me. I love my life, and I can’t wait to see what God has in store for me.” 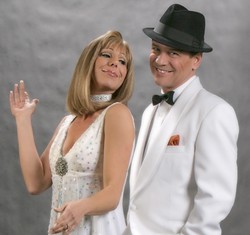 If you love Barbra Streisand and Frank Sinatra but think it’s a terrible tragedy the two vocal powerhouses never worked together, fear not, because impersonators Sharon Owens and Sebastian Anzaldo will present the concert that never was when Barbra & Frank comes to the Clark Center for the Performing Arts this Saturday, June 25 (8 p.m.; all ages; $29 to $46 tickets at clarkcenter.org or 489-9444). Presented by Diamond Horseshoe Productions, Barbra & Frank have held long-run headline residencies at the historic Riviera and Westin on the Las Vegas strip, played the famous Rainbow Room in NY, and toured the U.S. appearing in theaters, showrooms, casinos, and at corporate events.

Scott Cooper, who plays with Grateful Dead tribute act China Cats, will play a series of solo shows throughout SLO County over the next two weeks: Tuesday, June 28, at Gino’s Pizza in SLO; Wednesday, June 29, at Manrock Brewing Co. in Grover Beach; Thursday, June 30, at Otter Rock in Morro Bay; Friday, July 1, at Figueroa Brewing Co. in Santa Maria; and Saturday, July 2, at Peachy Canyon Winery in Paso. “I’ll be playing original songs, the ones you’ve heard on KPIG radio, as well as some new stuff such as my new homage to Warren Zevon,” Cooper said. “Naturally, I will mix in a variety of choice-but-uncommon covers from the likes of Townes Van Zandt, Ted Hawkins, Gillian Welch, Dylan, the Dead, Tom T Hall, and many others. I’ll be back in SLO County with my band the Barrelmakers later in October.”