One of a kind

Chipwrecked serves gourmet potato chips dressed up with cheeses, herbs, drizzles, and toppings. The menu also has sandwiches, salads, soups, and dips. Chipwrecked is located at 246 Pomeroy Ave., Pismo Beach, and is open daily from 11:30 a.m. to 8:30 p.m. Call (805) 556-5272 to inquire about catering your next event.

Owner and self-taught head galley cook Sarah Paddack of Chipwrecked in Pismo Beach is bold enough to bring us the Amercian snack staple and call it a meal. For almost seven years, she's served up piles of potato chips smothered in cheese, decorated in teriyaki, sweetened in juxtaposition with brownie batter and cinnamon—and, of course, she's named each of her creations after a famous ship. 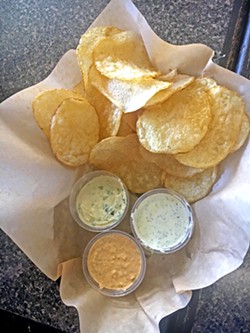 We visited Chipwrecked on a summer weekday—I thought it would be rebellious to have chips for dinner. A few hungry hipsters and young couples came in for salty to-go orders alongside some sandy families who ventured in straight off the beach.

All the people who come in to Chipwrecked seem to go through the same ritual. They study the (ever-evolving) magnet board for the specials (potato rosemary soup on the day we visited) and struggle over choosing the right dip (tugboat) to go with their chips (ships). Or they just order one of the gourmet chipwrecks, which are already dressed up in herbs, cheeses, and drizzles.

"Which one is the most popular?" everyone then asks Paddack.

"I keep saying I'm just gonna get a big spinning wheel," she said.

Everyone has their favorites, and for our tugboats, we go for the ranch, vegan garlic and herb, jalapeño popper, and brownie batter. The brownie batter never made it home. Paddack said that's the one that people just eat straight out of the container.

She makes her chips from the Kennebec variety of potato—a large, hardy, oval culinary favorite—and she fries them in canola oil for a thick, crispy potato chip. Paddack shops locally as much as she can to source ingredients. 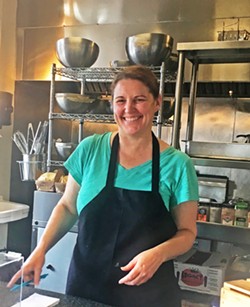 Her ocean green/blue eyes squinted into a dimpled smile as she described her passion for creating seasonal menu items, including the next nautically themed dish, which may involve all those wonderful peaches piled up at the farmers' market in these summer months.

Paddack is there every day Chipwrecked is open, working the to-go window, register, potato peeler, and deep fryer from start to finish. She has only a handful of employees (including her daughter, on occasion), so she will always be one of the two behind the counter.

"It is such a small town, and it's such a good place to be because you have so many businesses that are family-owned and operated," Paddack said. "A lot of times you'll see the owners behind the counter."

Contrary to its nautical sounding name, Chipwrecked is not a dark, dive-bar-feeling sailor joint with cobwebby fishing nets and stuffed swordfish speared to the wall. It's more clean and youthful than that—like a coconut wax-scented surf shop with pirates. Paddack said the place used to be a Chinese restaurant, and a Mexican restaurant before that. 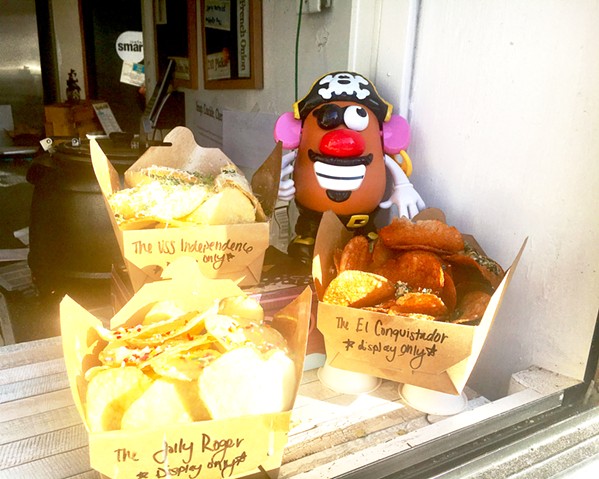 She loves the fact that she gets to meet visitors from all over the nation and even the world. And she said she feels good that the local regulars don't let the full parking on Pomeroy sink their desire to fish for her chips.

Paddack is a numbers person. She graduated from Cal Poly with a degree in mathematics, which she said helps her run a business in all its many varied tasks. Though she had never worked in a restaurant before owning one, she said she learned to cook from always being around her mother, Deborah Love (whose family has Southern roots). Love made everything from scratch, including homemade chips. Paddack said her mother, a person who just loves potato chips, is the one who gave her the chip restaurant idea in the first place.

I watched a mother of three young children sneak a chip out of her to-go orders of what looked like the Santa Maria seasoned chipwreck as the dad waited out on the sidewalk with the stroller and one of their sandy sons on his shoulders. The mother perched halfway on a chair for a moment with one of those salty bites. She blinked with surprise and slid back fully into the chair. Her husband peeked inside.

The dad balanced a baby while managing an impressive chip-eating pace.

Then the mom went up to order more at the counter as the dad raided the drink cooler for a Coca-Cola.

Cheers to these chips! Δ

Flavor writer Beth Giuffre likes having snacks for dinner. Reach her at bgiuffre@newtimesslo.com.