Choose your own adventure: You play bartender and pizza maker at Blast 825 Taproom in downtown SLO

How many times have you stared into an overwhelming vortex of craft beer taps, only to ask the bartender, “What’s good?”

I mean, how does one choose the perfect pint? There’s the pale ale, the oatmeal stout, the raspberry sour aged in oak barrels. And there’s the double IPA from that famous brewery in San Diego. Oh, and don’t forget that seasonal wheat with a hint of citrus zest on the nose (goes great with barbecued chicken).

Beer decision fatigue (BDF) has run rampant across SLO. You know you’ve fallen victim when you find yourself halfheartedly drinking a pint of something your bartender really likes. At Blast 825 Taproom, things go down a bit differently. Yeah, there are still way too many craft beers to choose from—43 to be exact—but, and here’s the happy news: You get to play bartender. You are captain of your own ship.

Simply walk up to any self-serve tap and pour a little or a lot. Heck, you can even mix ’em, although you might get some sideways glances from the hardcore beer nerd next to you (don’t worry about him, he’s taking this all way too seriously). The staff is friendly and here to help, standing by with suggestions. If you ask Blast 825 proprietor Dan Harper, people are ready for this kind of freedom, even if it can be a bit bewildering at first.

“Customers walk by our window, look in, and do a double take,” Harper said of the computerized wall of self-serve taps. “This concept is brand new. It’s functional, but there’s also a novelty to being able to pour your own beer. You’re the bartender now. You can taste by the ounce; try a splash of this or that. You might even find your new favorite.”

The current lineup includes 24 local breweries (including Bang the Drum, Tap It, and Central Coast Brewing Co.), out-of-state brews of all ilk, local kombucha, and a rotating lineup of local and non-local red, white, and sparkling wines.

I know what you’re thinking. How does it all work? Without the bartender holding court, is it pure pandemonium? Quite the contrary. Simply swipe your credit or debit card with the taproom attendant, who will issue you a “smart beer wristband” of sorts. The handy gadget keeps track of which beer you pour and how much, automatically charging your card, so you can gulp and go. Taproom General Manager Jeremy Hiser said it’s “a beer geek’s dream,” right down to the selection of glassware (choose from standard pint, tulip, or snifter). 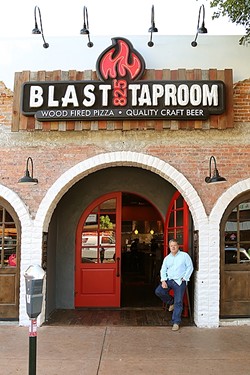 “This is ‘choose your own adventure’ at such a hyperactive scale. It’s froyo for beer,” Hiser said. “The conversation always comes back to the customers; it’s a very social environment.”

This is how trends get started, like the buzz surrounding Death by Coconut from Colorado brewery Oskar Blues (their chocolate coconut porter has been ridiculously popular since the taproom’s opening back in January).

Then, there’s the pizza. The very next thing you notice upon walking into the joint (after the gleaming wall of taps) is a 6,000-pound, red-tiled wood-fired pizza oven, which fires at an impressive 825 degrees. Of course, ordering your ’za is as freeform as picking your beer. Choose exactly what you want, and get what you want crazy fast. Harper worked to combine the beer-and-custom-pizza concept alongside Milano Restaurants, creator of Blast 825 Pizza.

“In seven minutes you get this fresh pizza or salad made up just the way you want it, and you can get in and get out, which is great for people working downtown,” Harper said. “You can pick what type of dough you have—whole wheat to gluten free—marinara sauce, pesto sauce, wine-alfredo sauce; cheese blends; and 40 different meats and veggies, all delivered fresh.”

That’s no joke. Every day, the kitchen crew comes in at 7 a.m. to start hand-stretching dough for the day ahead. I have to say, Head Chef Jeremy Limpangug’s muffaletta pizza—topped with mortadella, salami, mozzarella, and marinated onions and peppers—will probably become a cult favorite in SLO. It’s that good (and speedy).

“At some taprooms, food is an afterthought. Not here,” Harper said. “It’s a ‘one plus one equals 10.’ When you do pizza and beer the right way, you know it.”

A little timid? Not sure what beer to pick or pizza toppings to order? Just whisper a little WWJBD under your breath, Taproom mascot Joe Blast overlooks the eatery with a look that screams “1970s cologne ad.” If he can’t help you muster the strength, go forth and taste. Then, taste some more. That’s entirely OK.

“It can be very intimidating to go into a bar with 80 taps and have someone say, ‘What do you want?’ There’s none of that here,” Harper said. “If they like Budweiser, we might start them off with Figueroa Mountain 101, one of the lightest beers on tap, then explore from there. It never gets old getting people who are not into craft beer into craft beer.”

Hayley Thomas is way into craft beer. She can be reached at hthomas@newtimesslo.com.