Get yourself a copy of photographer Chuck Graham's new book, Carrizo Plain: Where the Mountains Meet the Grasslands, directly from the author on his website, chuckgrahamphoto.com, or via direct message on Instagram @chuckgrahamphoto. Locally, Coalesce Bookstore in Morro Bay, 845 Main St., and Volumes of Pleasure in Los Osos, 1016 Los Osos Valley Road, have copies available.

Most local residents have heard of the Carrizo Plain National Monument, an expansive grassland in the southeastern part of SLO County, but not many have visited except to witness a super bloom, a springtime event that happens every few years when conditions are just right. Others might have made the trek to see Painted Rock and its 4,000-year-old Native American pictographs.

It's pretty desolate, and most of the time it looks like an endless field of brown grass. 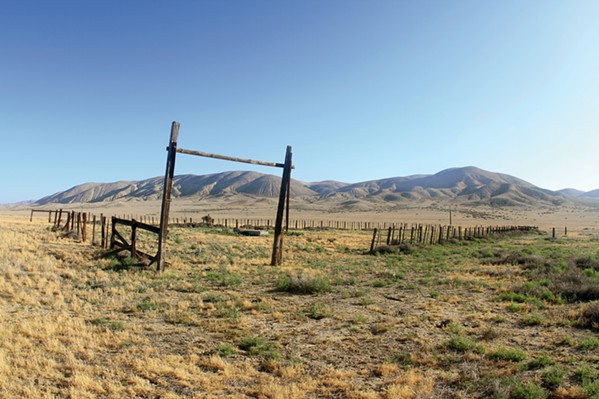 For Chuck Graham, however, Carrizo Plain is so much more. He's spent 15 years visiting the National Monument and recently released Carrizo Plain: Where Mountains Meet the Grasslands, a book filled with photographs and essays about this special place.

"When I tell people about the Carrizo Plain National Monument, they sometimes take my recommendation and make the drive out there only to return a little frustrated, perhaps disappointed. I often hear: 'I don't see what the big deal is.' But for me, as soon as I turn onto Soda Lake Road, time comes to a screeching halt and simply stands still. It's like stepping into early California—these are the Golden State's last historic grasslands, an open wilderness that isn't far, yet feels worlds away. And I love it," he wrote.

Carrizo Plain stretches about 50 miles long and as much as 15 miles wide and is the largest single native grassland remaining in California. Called tšɨkukunɨtš by the native Chumash, it translates as "place of the rabbits." Painted Rock in the Carrizo Plain Rock Art Discontiguous District contains examples of Chumash and Yokut rock art created around 2000 B.C.E. The area also offers spectacular views of the San Andreas Fault.

During an email interview, Graham, who also guides kayak trips around the Channel Islands, admitted, "I enjoy the drab. I enjoy the stark landscapes, the shadows creeping across the plain. It's still very beautiful."

He discovered Carrizo about five years after President Bill Clinton declared it a National Monument in 2001: "I saw some photos of it in a magazine. They were just beautiful, and I knew immediately I needed to be there."

He spent the next decade and a half returning, again and again, to hike and explore, camp and relax, and immerse himself in nature.

"I keep going back for the solitude, the wide open space, the colors, the wildlife," he said. "You never know what you might see."

"Not all Carrizo's species are represented here. My intention was to include as many wild inhabitants as I could, but nature has its own way of doing things. I always go with the flow and capture whatever unfolds before me. The Carrizo works well like that. Seeing its aural wonders only requires a few things: keeping my head up, my binoculars and camera at the ready, and staying grateful to get dirty."

This is both a picture book and a guidebook, with important information about the area's features, camping possibilities, and amenities (or lack thereof!). What was his goal for the book when he started the project?

"When I started the book, I was just thinking photo book, but my book designer, Terri Wright, saw more than that," he said. "She suggested breaking it up into three sections, writing some essays to break up the photography."

The three sections are "Flora and Fauna," chronicling the area's wildlife; "The Sweeping Plain," featuring stirring views of the landscape; and "Reflections," with eye-popping photos of the area's mesmerizing color and light show.

Graham visits Carrizo during all seasons and all times of year. How does it feel to a regular like him when a super bloom draws crowds? Does he think tourists are respectful?

"Even during a super bloom, you can still get away from the crowd," he noted. "Unfortunately, there are those that still can't find the trashcan or trample through the flowers, but I think generally people are respectful."

Looking through Graham's camera lens, you see the area as he does—a beautiful cathedral to nature's glory. The book will make you long to visit the place as Graham does, just himself, his backpack and tent, and his camera, binoculars, and notebook. What he remembers most are his encounters with Carrizo's permanent residents.

"Really, it's the moments with wildlife, the curious kit foxes or bugling tule elk. Those are the experiences I want out there," he said.

One feature of the area is glaringly missing. Aside from a couple of long shots of the sandstone rock formations of Painted Rock, there are no photos of the pictographs within.

"In regards to rock art and Native Americans, it's a respect thing," Graham explained. "They have some of the most elaborate rock art in North America. I'm hoping it stays that way."

Locally, you can pick up a copy at Coalesce Bookstore in Morro Bay and Volumes of Pleasure in Los Osos. It's as special as the place it depicts. Δ