One of Kelly Gearhart’s most famous victims will recover nearly all of the $2 million he lost to the disgraced Atascadero developer’s Ponzi scheme. But the money won’t come from Gearhart.

After a trial that lasted nearly six weeks, a SLO County jury awarded a little more than $1.9 million to former mixed martial arts champion Chuck Liddell in a civil lawsuit against Cuesta Title Company and another related company, Stewart Title of California. Cuesta handled the escrow on four lots Liddell purchased on Gearhart’s Vista Del Hombre project in 2007. In total, Liddell, a former Cal Poly wrestler, paid $2 million for the lots, according to testimony during the trial. 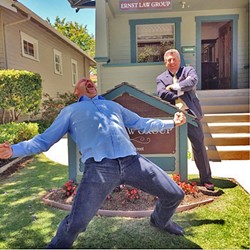 During closing arguments June 19, Liddell’s attorney argued that Cuesta employees knew about the fraud and stood to benefit from a close relationship with Gearhart.

During the trial Liddell testified that he believed his signature was forged on some of the escrow documents associated with the deal and that funds for transaction were released without his permission. In his closing remarks to the jury, Kelly said Cuesta didn’t know about the fraud and blamed Liddell for not doing his due diligence in researching the investment before jumping into a deal Gearhart.

“If [Liddell] trained for his fights the way he prepared to spend $2 million of his money, he wouldn’t have won those fights,” Kelly said.

The attorney also argued that the true villain was Gearhart, and that his clients were being targeted because Liddell and the lawsuit’s other plaintiffs were unhappy about losing their money.

“This case is about the plaintiffs’ looking for a scapegoat,” he said. “They made bad investments, and they’re looking to get bailed out.”

While Gearhart’s name was mentioned numerous times in court by both sides, the man himself was not there. Gearhart is awaiting sentencing later this month for pleading guilty in a U.S. District Court to two counts of wire fraud and one count of money laundering. A sentencing hearing is scheduled for June 29 in Los Angeles.