When images and videos emerged on June 22 of men wheeling away the statue of Junipero Serra from San Luis Obispo Mission Plaza, activists who've long called for the sculpture's removal rejoiced. 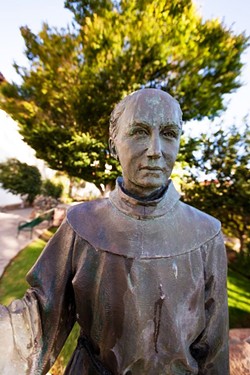 Mayor Heidi Harmon applauded the church on Instagram that day, writing, "It appears that they have proactively taken down the sculpture, ... so grateful to see this painful reminder removed from our public space."

But on June 23, the Catholic Church, through its Diocese of Monterey, clarified that local faith leaders actually removed the statue to protect it from vandalism.

In the past week, activists in San Francisco and Los Angeles forcefully toppled statues of Serra in public parks, while city leaders in Ventura called for one's removal outside of City Hall. A petition to remove the SLO Mission statue launched on June 22; it had 38 signatures at press time.

Monterey Bishop Daniel E. Garcia said in a June 23 statement that "it is unclear exactly what groups are attacking these and other Serra statues throughout the state," but that the church won't "support the violent destruction of sacred symbols of any faith community."

"This was done to protect them from possible desecration by violence," he said.

Activists and protesters nationwide have called for the removal of various statues of historic figures who are perceived as symbols of racism and white supremacy.

As the founder of the Spanish mission system, Serra brought Roman Catholicism to California in the late 18th century. While he was canonized by the church in 2015, his detractors argue he's a figurehead of Native American genocide and oppression.

"I feel it is right to remove a statue of someone who led the enslavement, destruction of culture, and genocide of California's indigenous tribes," wrote SLO resident Theresa Slobodnik on the SLO County Protest Watch Facebook page.

Garcia's statement defended Serra's legacy while also noting that his status as a saint "did not intend to bless all that happened in the missions from their beginning to the end."

"After exhaustive investigation, it is clear St. Serra made heroic sacrifices to protect the indigenous people of California from their Spanish conquerors and soldiers," Garcia said.

Erika Yanez, a spokesperson for the Diocese of Monterey, said the missions are currently "reviewing how to best safeguard all their sacred objects, including the statues." Δ