Surface lot would go, but developer would pay to replace lost spots

When the SLO City Planning Commission meets on Aug. 8 to discuss the scope of the environmental review it will require for the proposed Garden Street Terraces project downtown, some skeptics are hoping the analysis shines light on the city's complex plans to help finance the deal.

The project, which would sit between Broad and Garden streets along Marsh, would have the city handing over a 62-space public parking lot to Hamish Marshall's WestPac Investments, Inc. to speed along the development of a 70-room hotel, more than 50 condominium units, and more than 17,000 square feet of ground floor retail and commercial space.

Under a 2006 Memorandum of Understanding, the city would help get the project off the ground by advancing the developer $2.4 million of city funds. In return, the city would get 40 public parking spaces and ownership though not use of another 56 spaces. Those spots would be reserved for the planned hotel. 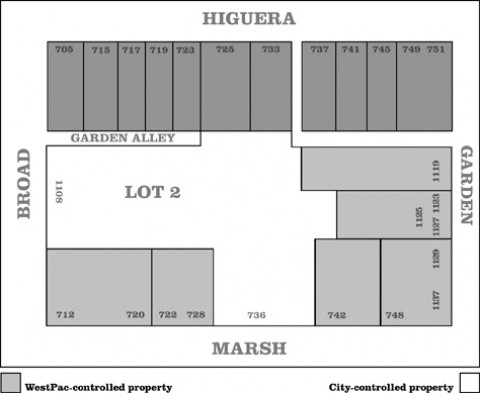 # "Basically the city is subsidizing development and acting as a de facto redevelopment agency without declaring itself as such," said Allan Cooper, a member of Save Our Downtown, a Cal Poly professor of architecture, and a former city planning commissioner. "The arrangement seems a little bit less than transparent."

Under the deal, WestPac would pay off the advance by leasing the hotel spaces back from the city over 30 years. Yet the deal is still more complex because, while WestPac would have to pay to make up revenue the city loses on the absent parking meters, WestPac would get to subtract any increased property taxes the project brings in from what it owes the city.

In short, the city would be loaning WestPac $2.4 million, losing 22 parking spaces, and giving up the expected increase in property tax. WestPac would be paying the city $660,000 for the 22 lost public parking spots, and the city expects to get new taxes from sales and hotel rentals.

The memorandum is nonbinding, and the project still has to go through the city's approval process, but for now the agreement spells out how both sides expect the project to progress.

Councilman Andrew Carter, who has earned a reputation as the council's go-to man on complex financial matters, said he's examined the memorandum and has been meeting with city staff to understand it better.

"Particularly I have some questions about what is the need for the city to be the banker," he said.

Carter called the city's financing arrangement "odd and unusual," but added "when you get beyond the fact that it's not normally done I don't walk in saying it's necessarily a bad thing."

He contrasted the Garden Street plans with the Copeland brothers' Chinatown project, an even larger project that's moving through the city's process a couple of steps ahead of Garden Street Terraces.

Chinatown, Carter noted, also involves plans to turn over public parking spaces for a development in that case, the city would be selling the developers the three surface lots that now have 143 metered public spaces. The current agreement would have the city sell its 1.5 acres of land for the year 2000-appraised value of about $3 million, although Carter and Mayor Dave Romero have said they expect that price to be renegotiated.

Carter said he thinks the city has negotiated a better deal for the Garden Street spaces because it retains the bulk of the public parking spots and would get a payment to make up for the rest the $660,000 that realistically reflects what the city would have to spend to replace them by building a new garage structure.

Cooper, however, said that even though that amount at about $30,000 per spot is well above the roughly $12,000 per spot that the Copelands would be required to pay to replace the parking spaces that will be lost in the Chinatown project, it wouldn't likely pay the full cost of new spots in a garage.

According to the memorandum, the city is offering the financing because the Garden Street Terraces project might not work financially without it. The proposal has been deemed a "slim project" economically on its own merits by Allan Kotin, the city's economic advisor.

Still, the project is important according to city documents because it serves the city goals of increasing taxes as well as other city policies, such as converting surface-level parking lots into more valuable uses and encouraging residential building downtown, where it wouldn't increase sprawl.

Marshall didn't return calls for comment on the plan, but in a 2006 letter that accompanies the plans, the developer touted the tax money the city stands to gain from the retail and hotel spaces and emphasized that he believes the project won't put the city financially at risk.

"At the foundation of our proposal is our desire to provide no net exposure to the city while preserving its long-term revenue flow," he wrote.

The project still has a long path to completion. At the upcoming Planning Commission meeting, commissioners and the public will be able to suggest items that should be a part of the environmental impact report. Like Chinatown, critics have also voiced concerns about traffic, parking issues, and the project's scale and proposed height, which would exceed 75 feet.

After the report is drafted, the commission will have a chance to recommend changes and it would eventually head before the City Council. Even if it all moves forward, the project could be more than two years from breaking ground for construction.