Civic Ballet's 'The Crucible' brought the Devil down to SLO Town

The Spanos Theatre filled up fast Saturday night for the world premiere of The Crucible, Civic Ballet’s latest creation. SLO showgoers came out in force in a mix of party clothes and play clothes, from jeans and backpacks to quasi-prom numbers. It helps to have a 30-person cast—lots of family and friends to buy tickets—but members of the local arts community, including SLO Little Theatre’s Artistic Director Kevin Harris and founder of the arts and culture blog Found Object, Anna Weltner, were also in attendance. They were there to see Drew.

That’s Drew Silvaggio, Civic Ballet’s Artistic Director and auteur of The Crucible, whose fabulous voice booms from the P.A., asking us to turn off our cell phones and thanking the “American Anti-Witch” league for “keeping America witch-free for almost 400 years.” And we are on our way back to 1953, in the middle of Arthur Miller’s world of red scares and Hollywood blacklists.

Fans of the original Miller text may have been able to follow the plot step-by-step, to a certain degree, but everyone else was swept along on a trancelike ride through the history of American paranoia punctuated by moments of levity and raucous ensemble numbers. Having seen the show go from rehearsal to performance, in the expanse of the Spanos I missed the intimacy of the studio, where my only paranoia was getting my legs out of the way of passing dancers. But every show must be midwifed into performance, and to see the technical “theories” Drew had promised me in our initial interview come to life was an hour-and-10-minute-long fascination … without intermission.

Video footage from hearings of the House Un-American Activities Committee plays during transitions—a bit on-point, but presumably allowing time for major costume changes. The Accusers return in uniforms and arm bands evoking the Hitlerjugend, and indeed the entire show is shot through with a vein of paranoia and fear endemic to both 17th century Salem and 1950s Washington, D.C. It’s a witch-hunt! 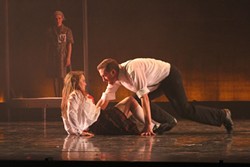 And while some of these technical elements, like newborn things, seemed unsteady on their feet, the dancers most certainly did not. The energy of the massive cast carried the show, and deferred only to the power of the pas de deux and pas de trois numbers involving John and Elizabeth Proctor (Ryan Beck and Elene Dinsmoor) and Abigail Williams (Hannah Clarke). Along with Jenna Lee’s Betty Paris and Emily McAllen’s Mary Warren, these were the show’s stand-out performances. Ruby McCann’s Tituba, a slave and the only character for whom the accusations of witchcraft seem potentially justified, is filled with a fire and passion upon which I would have liked to see an even greater emphasis.

Silvaggio has already hinted at the possibility of future performances/restagings of The Crucible, and it seems clear that this show is destined to grow and develop. The organic nature of movement-based performance makes this kind of evolution possible. So if you missed it the first time, don’t run out into the woods and pledge yourself to the Devil—because this won’t be SLO County’s last witch-hunt.

Arts Editor Erin C. Messer will soon be appearing before the House Un-American Activities Committee; until then, you can send her your Communist sympathies at emesser@newtimesslo.com.