If anyone tries to convince you there's a need to eliminate some regulation, consider 1980 Mazatlan 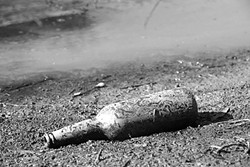 I frequently travel Highway 166 from the Santa Maria Valley to the Cuyama Valley and am always struck by the diversity and beauty of this road trip. My voyage traverses the rolling, sometimes green other times golden hills of the Santa Maria Valley, which are bounded by miles of sandy beaches and crashing waves, through the stunning beauty of the geologic uplifts of the coastal range, to the stark desolate beauty of the Caliente Range ringing the high desert plateau that is the Cuyama Valley, all of whose features remain relatively pristine.

Unfortunately, this trip also brings to mind the endless whining and verbal hammering of extremists who constantly complain about all government regulation and action. The key word here is “all”: Can you imagine our region, our country, if they had their way and we had no government regulation or enforcement?

For me, the question brings to mind another, much longer trip my wife and I took in the 1980s to Mexico. We were young, busy with our jobs, and eager for a short respite, so we booked an Easter deal to Mazatlan for a week. When the taxi dropped us off in front of the luxury hotel at the beach we immediately noticed an odor that came from the vacant lot next to the hotel. Raw sewage was being dumped there, eventually to make its way to the ocean. How quaint!

Looking back on it all now, how wise my beautiful wife was to pick up medication from our doctor before the trip to prevent illness. Bless her! After some wait in the lobby we finally arrived at our room. She was planning a shower and I threw the covers back to stretch out on the bed for a brief rest, but what was all the beach sand in our bed? After a few brief vulgarities aimed at our travel agent, I cleaned the sand out, gritted my teeth, and tried to doze off. I was awakened by my wife’s scream from the bathroom. Bursting through the door thinking we had been raided by bandits, I found to my disgusting relief that the shower was oozing brown and various other colors of water. I guess we just expected too much coming from the United States.

On our third day on the beach in front of the hotel, we noticed the beach was devoid of other hotel guests. They were all ill and had stayed in their hotel rooms. Apparently, they neglected to pick up medication. It was then I noticed the Mexican vendor with his colorful major-brand “Cola” umbrella and cooler. Until this day we had always gotten service on the beach from the hotel, but we were in Mexico, so why not buy from a local? It was an international brand from an official bottling plant, right? After a stroll across the beach I returned with two large bottles of cola and handed one to my wife. I plunked down on the sand and had the bottle tilted to the sun when that now familiar screech from my beloved wife saved me. We discovered there was a mass of floating debris in the bottom because the vendor collected bottles on the beach, refilled, and capped them under his colorful umbrella. Regulate, sanitize, and inspect? Oh, you pesky Americans!

But the highlight of our trip was the tour to the red-clay brick quarry, which took us into the mountains. We quickly noticed the area surrounding us looked as though an atomic bomb had exploded and erosion had scarred the remnants. No vegetation existed. Our driver and tour guide explained we were traveling through a national forest devoted to all Mexicans. To the poor, that meant slash-and-burn agriculture. Each year they burned off a new patch, planted corn for one year, and moved on, leaving devastation in their wake. They actually believed they could use the public national lands.

We have always vacationed elsewhere since that trip. If anyone tries to convince you there’s a need to rid us of some regulation, please try to visualize 1980 Mazatlan and just emphatically say NO. I am a lifetime firm believer in reasonable regulation. In a complex, compact society regulations are essential for public safety, the environment, and just plain basic sanitation!

Ken McCalip is a North Santa Barbara County native who holds bachelor and doctorate degrees in history, cultural geography, and law from various California universities. Send comments via the opinion editor at econnolly@newtimesslo.com.