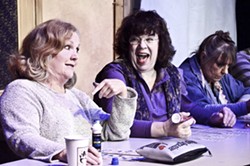 It can be an extremely strange and unnerving experience to run into people from your past. One day, you’re grocery shopping, checking if they still sell Butterfinger ice cream, and then, in a flash, there’s ol’ Chalky Studebaker. He’s looking good now—wearing Banana Republic, shopping for $75 wine, clearly wealthy from the cut of his well-groomed jib. You exchange awkward pleasantries. “How are you?” “Wow, you’re a lawyer!” “Me? Oh, I just … well, it was nice to see you.” Then, you walk home, downcast, shrugging your shoulders and wondering what could’ve set you two on such different paths. The regret seeps in, and you begin to question your entire life. Welcome to "Good People," SLO Little Theatre’s latest play.

Let’s back up a bit. That intro may have come across as grim, but after SLO Little Theatre’s last two ventures—two musical variety shows (Play On! and Cinderella)—playwright David Lindsay-Abaire’s South Boston-set character drama about class, race, and reputation packs quite the emotional punch. However, it is a most welcome and refreshing punch from a cast and crew firing on all cylinders. It’s no surprise either that the Little Theatre would breathe life into an intimate domestic drama. Lindsay-Abaire’s play, a 2011 Tony nominee for Best Play, is the type that thrives in this kind of small, close-knit community space.

From the opening, when we see a ramshackle “Dollar Tree” sign set amid the grunge of a brick-walled back alley, the scene becomes clear. This is a region beset by poverty, strong accents, and dead-end jobs. This isn’t the “If you can make it here, you can make it anywhere” of “New York, New York.” This is South Boston. You’re born there, you live there, and you die there. Or, that is what Margie (hard “g”) believes.

Margie Walsh has lived in the same South Boston neighborhood her whole life. She got knocked up right after high school, and the father’s an utter deadbeat. This leaves Margie in pretty desperate straits, working minimum wage paycheck to paycheck to support a handicapped daughter. It’s a fragile situation that’s on the verge of complete fracture when Margie loses her job at the Dollar Tree. Her friends, Jean and Dottie, suggest calling up an old flame, Mike. He’s a doctor, living comfortably with a wife and daughter in a ritzy Boston suburb. Maybe he’ll have a job. So, she goes to his office, pressures him into inviting her to his birthday party, and the altercation that ensues far exceeds what at first appears to be simple and casual story about two old friends catching up.

Though the play only boasts six scenes and six cast members, Good People slowly evolves into an intricate and unfiltered character study, bolstered by Margie’s knotty personality. Upon arrival, she is an indomitable force. Played by Patty Thayer, Margie enters the scene with the utmost of gusto—jabbering away at a lightning-like pace, never letting another person get a word in edgewise. She domineers and curses her way around, throwing F-bombs and “son of a bitch” around like they’re going out of style. But, in the quieter moments, you can see a harrowing vulnerability in Thayer’s eyes. As the play goes on, and Margie’s past is revealed, Thayer illuminates Margie’s contradictory nature with a powerful combination of restraint and exasperation—the kind that could make anybody empathize with a character that initially seems a little rough around the edges.

The same goes for the rest of the cast. From the get-go, the actors embody these characters as fully formed, recognizable individuals. Elaine Fourier and Anita Schwaber play Jean and Dottie, Margie’s friends, as the Laurel and Hardy of doddering, small town dames. The former’s cantankerous bite clashes with the latter’s aloof optimism for the best kind of casual comedic relief. As Stevie, Margie’s Dollar Tree employer, Christopher Riordan manages to transform what could easily be a low-key punchline into a sweet, sympathetic young man. But, the show really ignites when Natalia Salsbury and Gregg Wolff enter the picture. As Margie’s former flame, Mike, and his wife, Kate, the two nearly combust in a climactic, second act scene with Thayer at full-tilt froth. All at once, these formerly placid and pleasant people reveal their sordid selves, and the result is eminently magnetic.

For nearly two hours, this small cast in a show of small stakes makes this play of everyday people in everyday situations so much more than the sum of its parts. Director David Carey Foster masters a slow burn effect, where seeming petty issues evolve into a raw discussion of circumstance, luck, race, and class. Behind the quotidian façade and your occasional eccentric old woman who sells ceramic pot rabbits, this show reveals some very real and rough-hewn tensions. At its core, Good People eloquently showcases this dynamic. Does circumstance dictate our identities? Can we be good people in spite of our past? Those answers are never made clear, but what is clear is that SLO Little Theatre’s "Good People" is a good show.

Jessica Peña definitely thinks ceramic pot rabbits are the next big thing. You can contact her at jpena@newtimesslo.com.