National murmurings find their way to the Central Coast, where rumors of sales are just that: rumors

Radio, like most mainstream media outlets, is suffering the effects of an ever-changing market. The New York Times reported on Sept. 15 that Clear Channel Communications America's biggest radio operator, boasting more than 1,200 stations in upwards of 250 markets is considering selling out some of its radio stations located in smaller markets.

# San Luis Obispo County is classified as a smaller market, according to Clear Channel officials.

"I've heard nothing specifically about San Luis Obispo stations," said Clear Channel's Senior Vice President for the Western Division Ed Kramps. "There have been some stations sold in the company. With 1,200 stations, that's going to happen."

Take a tour down your radio dial. At various points, you're going to come across something broadcast by Clear Channel Communications. The operator owns four radio stations in San Luis Obispo County: KVEC, KSTT, KSLY, and KURQ.

To stay competitive, Clear Channel unveiled streaming live radio and podcasting in July expanding its radio platform. Streaming talk radio and music over the Internet requires a faster connection than dial-up as well as a downloaded media player but allows listeners to enjoy their favorite stations while plugging away on the computer. Podcasting allows listeners searching for past broadcasts, such as Dave Congalton's drive-time talk show, to tune in at a later date.

Earlier this month, the radio mega-chain asked the Federal Communications Commission (FCC) to ease up on ownership regulations and allow it to control 12 stations in a single market. Currently, the maximum is eight. Opponents complain that deregulation leads to a more homogenized scene at the expense of listeners. Public access to varied viewpoints, they argue, is diminished.

"Regardless, it is a corporation, but these guys run their own stations with little interference from corporate," Clear Channel's Kramps said. "We are there to provide support. Rich Hawkins our local market manager is doing an outstanding job. He is very much in tune with the local marketplace."

Clear Channel was born in 1972 and grew steadily through the 1990s though nothing like it did after the deregulatory phenomenon that exploded when the Telecommunications Act of 1996 eliminated national ownership limits on radio stations. Clear Channel vaulted from 36 stations in 1996 to more than 1,200 stations today. 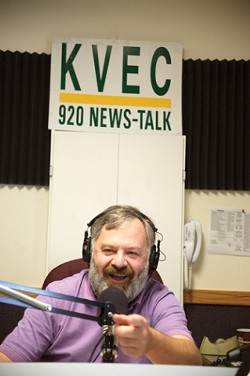 # Locally, the communications behemoth arrived around six years ago. Since then, it's stood fast with four stations under its wing.

"Our San Luis Obispo stations compared to any size market are very successful with advertisers and listeners," Kramps said.

Even so, Americans aren't tuning into radio as much as they used to. According to America Media Service, 25 percent of Americans listen to less radio now than they did five years ago.

Terrestrial radio stations are forced to compete with America's two satellite radio companies XM Radio and Sirius as well as the programmable iPod.

Though nine out of 10 Americans still listen to radio, they are listening less, according to the New York Times. It appears that the rush to gobble up radio stations has ended and a buyers' market has begun.

"It's like any major corporation divesting of non-profitable stations," said Guy Hackman, owner of K-Jewel the only independently owned station in San Luis Obispo. "I don't think they will sell out in this area."

Representatives of the local Clear Channel stations referred all questions about potential sales to the corporate head office.