The SLO County sherrif's department has an image problem - can it be fixed?

It's been a long, wearing eight years for San Luis Obispo County Sheriff Pat Hedges and his department. Three in-custody deaths; a lawsuit over excessive use of force; and sharp, sometimes inaccurate media criticism have impacted the departmentâ€™s image in the mind of the public. And although the department has not been incriminated in any wrongdoing, a recent $650,000 settlement awarded to the children of a man who died while being placed under arrest has almost undeniably presumed some level of guilt and has negatively affected peopleâ€™s perception of the civil servants who exist to protect the public.

Perception is crucial to the effectiveness of the sheriffâ€™s department. According to one deputy who spoke to New Times, a little bad can easily overshadow a lot of good. 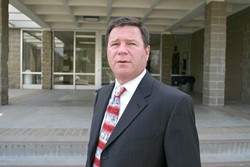 #â€œThatâ€™s always a concern of mine and of the Sheriffâ€™s, that damage to our credibility and trust may become irreparable,â€? said Undersheriff Steve Bolts. â€œShort of an expansive media campaign or an expensive advertising campaign, Iâ€™m not sure what we can do, except to continue to do a good job from day to day to earn the trust of the citizens.â€?

Most of the heat has come as a result of the in-custody death of Jay Vestal in August 2003. Hedges said it was an unfortunate occurrence that the media overreacted to. The deputies were â€œcriticized for doing their job and apparently doing it correctly,â€? added Bolts.

But that was not the only incident to taint the departmentâ€™s image.

In December 1997, just before Hedges was appointed to sheriff, Donal Schneider died while being placed under arrest after he was pulled over for improper vehicle registration tags. Deputies had pepper-sprayed Schneider and placed him on his stomach when he died of an apparent heart attack. The autopsy listed obesity and an inability to breathe as contributing causes.

Schneiderâ€™s companion Betty Myers sued the county for $90 million, claiming the deputies were responsible for his death. She was awarded $20,000.

In March 2004, Keith Yecny died in county jail during an altercation with jail staff, who were later cleared of any wrongdoing by the district attorneyâ€™s office. An excessive methamphetamine level in Yecnyâ€™s bloodstream was cited as a cause of death. Yecnyâ€™s parents have filed a claim with the county, and could sue if the county fails to respond.

In August 2003, Jay Vestal died while being placed in custody by sheriffâ€™s deputies outside his girlfriendâ€™s house in Templeton. He was put on his stomach and handcuffed. Vestal soon turned blue with the weight of an officer on his back. CPR administered by deputies failed to revive him. It was caught on videotape. Vestalâ€™s children later sued the county, which settled for $650,000 pending approval by a federal judge in Los Angeles.

Although the media has largely claimed that positional asphyxiation was responsible for the Vestal and Schneider and deaths, it wasnâ€™t officially attributed to either. Vestalâ€™s death was ruled as a drug overdose and Schneiderâ€™s was attributed to a heart attack. Both of these causes of death are often linked to positional asphyxiation, but the term is often defined improperly, said Deputy Barney Foster, who heads arrest procedural training for the SLO County sheriffâ€™s department.

Foster said â€œpositional asphyxiationâ€? is a situation that can occur when someone who is obese or has a medical condition has a heart attack because they are in a prone position (lying face-down on their stomach), which can close off air passages. Positional asphyxiation, said Foster, does not happen to healthy people.

But interpretations of positional asphyxia are clouded and disputed by medical, legal, and law-enforcement experts. Some county sheriffâ€™s departments in California do recognize positional asphyxia as a cause of death, and train their deputies accordingly. Many, like SLO County, do not.

Even though there have been two controversial in-custody deaths in the last eight years where positional or mechanical asphyxia has been cited as a contributing factor, Hedges is hesitant to acknowledge it.

â€œI guess if somebody is strangled or placed in a certain position where they cannot get air,â€? he said, â€œthen technically you could call that positional asphyxia.â€?

A survey the New Times received from Scott Radovich, attorney for the Vestal children, shows that the sheriffâ€™s department in Santa Cruz County, for example, does recognize positional asphyxia as a potential cause of death.

â€œAbsolutely,â€? wrote Sgt. Fred Plageman. â€œThe entire law enforcement community within Santa Cruz County has received training and continues to provide ongoing training with respect to positional asphyxia. Several changes have been made in the handling of persons in custody in an attempt to prevent this from occurring.â€?

â€œEverything we do progresses based on new information that comes to light, and not being a trainer â€” I was a defensive-tactics instructor back in the early â€™80s â€” Iâ€™m no longer involved in that aspect, so I donâ€™t know. I canâ€™t tell you any specifics of change over the years,â€? Hedges said. â€œDo we provide training on â€˜Hereâ€™s the way to affect an arrest; to take somebody into custody â€” hereâ€™s what you have to be careful about?â€™ Yes, we do that, but we donâ€™t have a lot of negatives as far as â€˜Hereâ€™s what you donâ€™t do as far as policy.â€™ We have training as far as â€˜Hereâ€™s the proper way to do things and hereâ€™s what you need to be careful about.â€™â€?

Over the years the SLO County sheriffâ€™s department has abandoned some procedures, like hog-tying a â€œkicker,â€? someone who is resisting arrest. Deputies now use shackles to immobilize violent detainees. They also have specific anchors to fasten detaineesâ€™ legs to their cruisers. 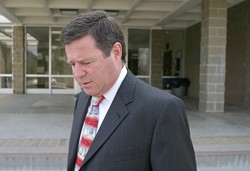 #And there are many classes. The state-run Peace Officer Standards and Training (POST) requires 24 hours of training every two years for each sheriffâ€™s deputy in the state. SLO County requires an additional 24 hours, which can come in the form of classes like the Baton Update course and the Patrol Rifle Update, a requirement by the county but not the state.

Charles Fox, training manager for the SLO County sheriffâ€™s department, said that the departmentâ€™s â€œtraining is absolutely in excess of the requirements, [and] at the minimum [it] doubles the state requirement annually.â€?

Itâ€™s the command staff that decides the kinds of classes and types of training for the deputies. The marching orders come from the top â€” Fox said it could be the operations commander, the undersheriff, the commander of operations chief, the support services chief, or even the sheriff himself.

The Vestal and Schneider deaths also reveal something else: Both of them were given CPR while handcuffed.

The administration of CPR to a patient who is handcuffed is the cause of some debate in the medical world. Some medicos say the position of the body created when a detainee has his hands behind his back while lying on his stomach can create a positional asphyxia scenario and affect successful CPR. Others say thereâ€™s no evidence to prove that, a sentiment echoed by the SLO County sheriffâ€™s department.

After Schneiderâ€™s death, Hedges, in his first year of office, told New Times that training procedure had been changed so that cuffs were removed from a restrained individual before administering CPR.

Then why was Jay Vestal still handcuffed while he was getting CPR?

â€œThatâ€™s the training, and itâ€™s been determined that the time required to take off the handcuffs before CPR is started is probably not that crucial,â€? said Hedges. So deputies are trained to take the cuffs off.

But of course there is still debate over the matter, points out Undersheriff Bolts.

â€œTo throw in another step â€” that is, to always take the handcuffs off â€” maybe to you and I it seems like a common-sense thing. I think the medical experts would argue [whether or not] it matters one way or the other.â€?

Sgt. Plageman said itâ€™s the safety of the deputy that may determine whether handcuffs are left on or come off. Taking the restraints off a potentially violent suspect can create untold hazards to the deputy, and potentially to the public.

Deputy Foster points out that when detainees come to after receiving CPR, they often become extremely violent. But the plaintiffs in the Vestal case argued that Vestal, who was in his underwear and had an ankle injury, was neither an escape risk nor a threat to officers.

Hedges admits he is particularly distraught over the settlements that have been awarded so far. Thereâ€™s an undeniable acknowledgement of guilt when the county settles a civil rights lawsuit, as in the Vestal case. Even though the deputies may have been cleared, it has a negative effect on the deputies and the publicâ€™s perception of them, said Hedges.

If the sheriffs department has an image problem, the media is probably to blame for it, said Hedges.

â€œI certainly donâ€™t expect anybody who works in journalism to take the side of law enforcement,â€? said Hedges. â€œItâ€™s not the politically correct thing to do. Iâ€™m not asking for that, but I do ask that [they] be fair.â€?

Hedgesâ€™ deputies were cleared in the incident involving Vestal partly because of a departmental videotape, which Hedges didnâ€™t release for months. Hedges said he was nervous that the press would misinterpret deputy behavior and actions and it could negatively affect the investigation.

Unfortunately, though, the media got restless and demanded to see the video, and then criticized him for withholding it.

After reporters finally saw the tape, â€œthe media kind of lost interest in it,â€? said Undersheriff Steve Bolts. â€œWhat was months of speculative reporting turned into about one or maybe two days of setting the record straight. Then it was pretty much lost.â€?

The sheriff thinks the media lost interest because the video shows (according to Hedges) that Vestal resisted arrest and that the deputies followed procedure.

But after viewing the video itâ€™s hard to say what it clears up. The dimly lit police-cruiser video is murky at best; the only certainty in the video is a porchlight in the background. The quality of the tape can be likened to wearing sunglasses while watching two months fluttering around a candle. What is apparent in the video is a struggle, screaming, and the eventual death of Jay Vestal.

â€œItâ€™s an interesting profession,â€? said Hedges, â€œbecause you can have a doctor down in L.A. involved in a malpractice case [with] totally gross misconduct, and that doesnâ€™t transfer to doctors we have up here. But you can have a Rodney King situation down in L.A., and for reasons I donâ€™t quite understand, [itâ€™s], â€˜Thatâ€™s the way the cops do it.â€™ Within the law enforcement profession that stuff transfers. Itâ€™s an interesting phenomenon.â€?