A local man puts his opinions before the nation

San Luis Obispo serial entrepreneur and developer Cliff Branch woke up one day last month, watched President George W. Bush give a speech on the morning news, typed out a letter, and doled out approximately $45,000 for an 8-by-11-inch advertisement in USA Today. 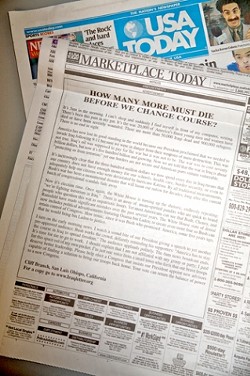 # Frustrated and overwhelmed with the war in Iraq and President Bush, Branch paid to have his letter titled "How many more must die before we change course?" appear in the Oct. 27 issue's Life section, boasting a circulation of approximately 4 million nationwide.

"I have been overwhelmed and frustrated with the war in Iraq," Branch later told New Times. "I felt I needed to do something."

The letter has spread beyond readers of USA Today after getting exposure on numerous blogs and web sites. It has sprung up on sites such as Vets Against the Iraq War and the Motley Fool, the latter of which is a web site with approximately 1 million registered subscribers. That site listed Branch's USA Today statement as one of its top three most recommended posts for at least three days following its publication.

Branch has received letters, e-mails, and phone calls in numbers too massive to count. Most have been positive though a few are too egregious to repeat. Some promote extremely unconventional views.

"The only weakness I see with Bush is why not go ahead and nuke Iran and Korea now?" reads an e-mail Branch received from an unnamed source on Oct. 28. "As far as those terrorists in Gitmo we might as well execute them why waste money on those assholes? We don't really need fences or borders either, snipers should do the trick and save a lot of money we could spend on gun education and safety, and think of the money we could save on medical care we provide free to illegal aliens."

Branch said that his mother, Betty Branch, the ex-editor and publisher of the Carmel Outlet and founder of the Women's Center and the Grandmothers House, voiced her support for the effort.

"She called me in tears and said, 'You're carrying on the family tradition,'" Branch said. "It's been gratifying and scary."

Here, in its entirety, is Branch's advertisement. Read it, and join the millions of others who've pondered it, mulled it over, and responded to it.

"It's 5am in the morning. I can't sleep and suddenly I find myself in front of my computer, writing. There's been this pain in my gut. It's the war. 20,000 of America's finest young men and women have died or have been severely wounded. There are more than 50,000 Iraqi dead and 900,000 refugees. There is no end in sight.

"America has now lost its good standing in the world because our President proclaimed that we needed to invade Iraq following 9-11 because we were in danger from their weapons of mass destruction. This was not true. Iraq's oil was supposed to pay for the war but it was not to be. The war was to cost seventy billion dollars, but now it's five hundred billion and growing. Now we are told that the war in Iraq is about 'protecting us from terrorists' yet our borders are not secure and American ports remain vulnerable.

"It's increasingly clear that the three-hundred-million dollars we now spend every day in Iraq means that our country does not have enough money for our schools, health care, border security, or even to adequately help our citizens who were devastated by hurricane Katrina. By all traditional measurements, Bush's war has been a monumental disaster that will haunt our nation for decades long after this current batch of congressional scandals fade away.

"Now it's election time. Once again, the White House is turning up the rhetoric, endlessly repeating: 'we're fighting terrorism in Iraq.' There is an array of mean-spirited pundits who are quick to brand people who question this war as unpatriotic losers. Yet most Americans can see that Bush, Cheney, and Rumsfeld have made monumental mistakes over the past several years. The White House state of denial now includes political advertisements featuring Osama bin Laden, to create even more fear so Bush can retain control of Congress. How ironic, since it was Bush who promised America, some five years ago, that he would bring bin Laden to justice.

"I turn on the early morning news. I watch a sound bite of our President giving a speech to yet another pre-approved audience. Bush works the crowd, defiantly reminding his supporters: 'America has to stay the course in Iraq to spread freedom.' The audience applauds politely. The 6am news broadcast ends. It's time for me to go to work. I should explain that I am not affiliated with any group or party I paid for this space out of my own pocket. I'm just one voice from a small town who feels that our brave troops deserve better leadership. Please help to elect a Congress that insists our President appoint new advisors capable of finding a solution to bring our troops back home. Your vote can return the balance of power to a new Congress."

Numerous citizens throughout the United States have applauded Branch for his courage, dedication, and love of country. E-mails and letters also describe fears for their sons in Iraq and for Branch.

"I hope he doesn't get picked up by Homeland Security," Pismo Beach resident Ron Janalli wrote in a letter to New Times.

Cliff Branch's web site, which includes a follow-up message from him, is at www.Iraqletter.org.