Clock's ticking: The Hourglass Project takes steps toward a stronger economy for the Central Coast

Under the shared belief that the economy's problems are too big for any individual community to solve on its own, a coalition of Central Coast-based business and civic leaders decided to form a collaborative "action tank" to help create high-quality jobs throughout San Luis Obispo and northern Santa Barbara counties, from San Miguel to Lompoc.

Melissa James was recently appointed to be the collaboration's first CEO.

"It's time for us to awaken our possibilities and start viewing our challenges as opportunities to think big and leverage our strengths to ensure a vibrant regional economy," James told New Times.

Named the Hourglass Project to reflect a sense of urgency, the organization feels there's a finite amount of time to implement a stronger economy for Central Coast residents. 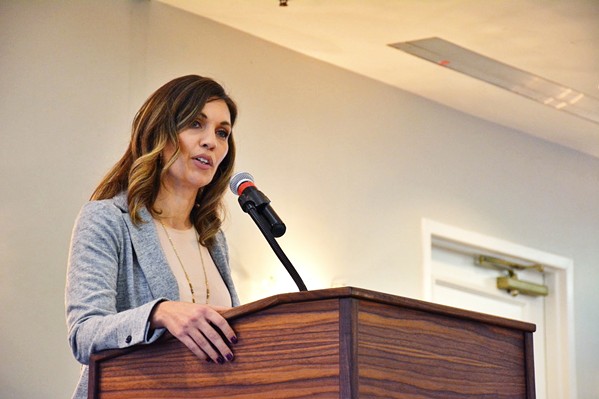 "The Hourglass Project is designed to drive economic opportunity and prosperity across the Central Coast region, from Vandenberg to Camp Roberts, a region of nearly half a million people," James explained. "The effort has a year of bottom-up momentum and demand from business and civic leaders across the region who believe now is the time for a new approach."

What personalizes the mission of the Hourglass Project for James is that it's based on the Central Coast, she said. Although she grew up in Sacramento, SLO County was home to James during her college years at Cal Poly and again after taking a job with the SLO Chamber of Commerce, where she developed initiatives related to housing and infrastructure planning.

"I know too many hardworking people on the Central Coast who are struggling to get by, let alone get ahead," James said. "I want to see more people, including my two daughters, have the opportunities to build a life and future here.

"We will be aligning the region under one voice and brand to drive policy solutions and investment at the state and federal levels as well as to attract talent, capital, and new business," she continued.

James' résumé carries public policy and strategic communications experience in both the public and private sectors, including the California Senate as capitol director for former Sen. Sam Blakeslee.

As CEO of the Hourglass Project, James plans to put various short and long-term initiatives into place, including a "jobs playbook," which will list the actions required to create new jobs in specific locations across the region, and a comprehensive database to measure the results.

"The playbook will be an inclusive process to set our vision, goals, and targets for the types of opportunities we want to create here," James said. "The database will give us a stronger case on the region's many assets and strengths and help us to make decisions and measure our progress against the data."

For more info on the Hourglass Project, visit hourglassproject.org.

• Sensorio, the immersive art center planned in Paso Robles, needs volunteers to help set up its first art installation, Field of Light, by artist Bruce Munro. It's described as "a colossal multi-acre walk-through artwork," and interested volunteers can be part of making this vision a reality by signing up at sensoriopaso.eventbrite.com.

• Doc Burnstein's is now offering a delivery option from its locations in SLO, Arroyo Grande, and Santa Maria. Visit docburnsteins.com for the full menu, pricing, and more information. Δ