The sounds of the ocean waves crashing against the shore whirl about and hit the ear in a melodic way. Their siren song is both enchanting and indecipherable, with a pull as strong as a riptide. The vocal waves of Morro Bay beckoned to music composer Mark Abel and he responded with an opera. 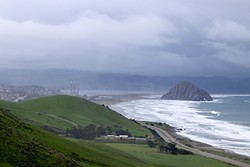 Several years ago, after a career as a foreign news editor with the San Francisco Chronicle, Abel chose to settle down on the Central Coast and refocus on his first love: music. With no rentals to be found in his favorite little town of Morro Bay, Abel made a home in quiet San Simeon to create an opera set in the tiny beach town that resonated with him.

"Morro Bay is a place I like a lot; I identify with it," Abel said

He grew up listening to classical music with his dad, but spent his 20s and 30s playing guitar and bass for various rock bands, mostly in New York. He wanted to bring elements of both styles of music to his opera, Home is a Harbor. The story follows the lives of twin sisters, Lisa and Laurie, who live in Morro Bay and have just graduated high school. Lisa is an artist intent on going out into the world, and Laurie doesn't really know what to do. She has people skills but hasn't found anything she's really in love with yet, so she winds up gong to Cuesta College and later transfers to Cal Poly.

"I do see them as archetypal, decent people," Abel said.

Interspersed in between the singing are bits of spoken dialogue. This was a conscious choice on Abel's part and not something you see in every opera. In addition to composing the music, he also wrote the lyrics and dialogue (or libretto as they say in the opera world). The process of creating Home is a Harbor took about two years.

"I find that the interjection of spoken dialogue is a good thing to do as it breaks up the flow in a good way and really makes you pay attention to what's being said," Abel said. "Having worked with words in the news business for a long time I felt that I was capable of writing my own libretto."

A CD of the opera is currently for sale, and Abel is in the process of shopping the show around to opera companies across the county. Home is a Harbor was conducted by Benjamin Makino, the music director of Opera Memphis. Sopranos Jamie Chamberlin and Ariel Pisturino, baritones Babatunde Akinboboye and E. Scott Levin, mezzo Janelle DeStefano, tenor Jon Lee Keenan, and bass Carver Cossey"all hailing from opera companies across Southern California"took on the soloists' roles.

After the show's protagonists, Lisa and Laurie, head out into the world, things get rocky. Laurie's boyfriend, Lance, goes off to join the Army and fight in Afghanistan and comes back forever changed and addicted to painkillers. Lisa has success in the art world in New York, but feels stifled when forced to choose between commercial success and evolving as an artist. The two end up back home in Morro Bay commiserating over a glass of wine while sitting along the Embarcadero. It starts to rain and they head back to the car, where they run into Lance, who is now a homeless veteran. 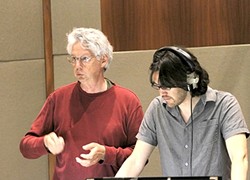 "There's some very moving dialogue that happens at that point and finally the girls decide, for now at least, they're not going to go back out into the big world; they're going to stay in Morro Bay and try to help set up an organization to help homeless veterans," Abel said. "It ends in kind of a redemptive way."

It's more than just a nice story set in a town that San Luis Obispo County locals will appreciate, for Abel Home is a Harbor speaks to where we are as a country today and where we could go.

"It feels like 1968 again, which was a year when the country really felt like it was on the verge of fragmenting, and I hope that doesn't happen again," Abel said. "This piece, I think its message is ultimately something kind of wholesome: that we have to come together and people have to believe in their own moral rock of some kind."

Ryah Cooley can't sing to save her life at rcooley@newtimesslo.com.