Closed for business: A Morro Bay resident claims city officials blocked him from pursuing a business 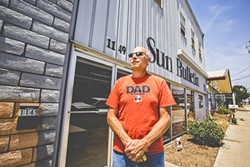 Standing on the sidewalk in front of the building, Rick Holliday pointed inside.

The lights were off, and the room beyond his finger was occupied only by some unarranged furniture and a few power tools. A city notice that had been posted earlier was no longer stuck to the glass, but its message stands: The building on Market Avenue in Morro Bay, formerly the home of the Sun Bulletin, remains unsafe to occupy, according to Morro Bay city officials.

“You can’t do this … ,” Holliday said as he pointed, referring to the now-scrapped plans he and a few partners began in 2011 when they leased the building. They originally wanted to open a multi-use business combining an eatery with photo and video production services as well as community arts.

Holliday turned and pointed in the opposite direction toward city hall and finished his sentence: “… until you can get in that door. And they don’t let you over there.”

Holliday was dressed in a “Dad to the bone” T-shirt, but absent was any video recording equipment he so often has on his person when meeting with city officials. He said he has about 70 recordings of conversations with city officials in various departments, including the police. As of press time, five such videos were available on the YouTube channel, “Morro Bay Corruption.”

Holliday is also involved in litigation with the city. Most recently, he received $4,301 on May 19 for a personal injury claim he filed after he tripped on a sidewalk.

Additionally, on April 24, Holliday filed a small claims lawsuit against the city, alleging “oppression, misrepresentation, harassment, intimidation,” and more. At the heart of his case, Holliday said, is his belief that city officials actively blocked his partners and him from filling applications to open their business. Additionally, he said, police have been called out to the building, searching for indoor marijuana growing operations that were never there. Holliday said he holds a prescription for medical marijuana.

While he dismissed the harassment case on May 30, Holliday said he’s been in discussions with several local attorneys, as well as members of the American Civil Liberties Union, and he plans to re-file the case in federal court.

“I’m working on it from a bigger picture now,” he said. “It’s taking on a life of its own, and I’ve got some other attorneys who have taken an interest.”

As it stands, the building remains under scrutiny after city building inspectors issued a “notice of violation and order to abate” on Nov. 1, 2013, following an unpermitted Halloween party at the building, which drew about 30 people. According to that order, which deemed the building unsafe for occupancy, the leaseholders were required to submit plans to make the building safe—specifically to address problems with the exits, lighting, and ventilation, which were deemed a fire hazard.

Holliday and his partners have withdrawn their holding in the building. As of press time, Richard Rowe had applied to open The Market Place there. Morro Bay Legal Assistant/Deputy City Clerk Dana Swanson said the proposed pottery manufacturing space and showroom “appears to meet the requirements of the zoning district.”

Jim Davis, who was also previously leasing the building with plans to open the original mixed-use business, has pulled out as well.

But the aftermath of their attempts to file permits for their desired business now linger in Holliday’s lawsuit. He talks about the issue as more than a mere property-rights dispute; he believes he was actively prevented from moving forward with his plans.

According to a written response from Swanson, the city has received three applications pertaining to the building in question since 2011, when Holliday and his partners assumed the lease. The city provided a demolition permit in May 2011, which expired in November of that year. There was another business license application in February 2012 for a retail market, which would have been an allowable use under the existing zoning, but the applicant scrapped the plan. The most recent application for a pottery facility is still under review.

When asked if there could have been a potential compromise, Holliday said city officials refused to even accept his application, which would have started the process toward such a resolution. In early meetings with the city, he said they told him he could only open a tavern, bar, or bed and breakfast.

“In this community, if they don’t like you, you have to go to special meetings,” he said, adding that he was told he could apply for one type of business, but not the multi-use type proposal he was seeking.

“We got everything, jumped through every single hoop, only to be brought back in,” he said.

Holliday said he’s also met with officials from the California Office of the Attorney General, but Swanson said the city hasn’t received any contact from that office on the matter.

While Holliday’s original case alleged damages of $10,000, he said the litigation isn’t about money for him, but instead focuses on how the city treated him, his partners, and their plans for a business.