Closing in on the 'Dean mystique'

Following a legend from the passenger seat of a Porsche Spyder

James Dean's 1955 Porsche 550 Spyder, "Little Bastard," had 135 German horses running underneath the hood. The model that I took laps in at Laguna Seca has 155 and a fiberglass body. It's a replica, but equally if not more stunning then old No. 130- Dean's Little Bastard.

This is not, by any means, to say that I experienced any more of a thrill in the replica than Dean did in his original. At Laguna Seca we had to follow certain rules, much to the chagrin of Rick Jiloty, the owner and driver of the Spyder. We were in a "gentleman's race," which essentially means no passing, no rubbing, and no getting too crazy, even though there are 155 German horses begging to be whipped and ridden ... hard. Oh well.

Jiloty contacted me after I posted a message on an online bulletin board looking for a ride in a Porsche Spyder. Spyderowners.com is just one web site for Spyder owners and aficionados, and serves as place for Spyder enthusiasts to talk shop and plan group drives.

In all, there were 90 original Porsche Spyders made. They're small but incredibly powerful cars with a mid-engine design that provides an even weight distribution. This grants the Spyder impeccable handling abilities. When standing next to one, the Spyder seems to come to about knee level. It seems like it's all wheels and engine, totally low profile, and one can easily imagine it slipping though the air with virtually no wind resistance. Today, far more replicas have been produced then originals. Replicas go for about $25,000, while an original Spyder, if you can find one, can be purchased for about $1 million.

On the web bulletin board, I mentioned I was writing an article about James Dean for the 50th anniversary of his death at the intersection of highways 41 and 46 in Cholame, not far from San Luis Obispo, and I wanted to ride in a Spyder to get a sense of what James Dean was so hooked on. Racing was, after all, like acting, one of Dean's passions.

Jiloty wrote me back. He said he had a son who is a writer and he lived with him when he was getting started. It sounded like he was used to hearing bizarre story requests.

"It's a 2 hour drive from you- but Laguna Seca was James Dean's intended destination when he crashed in Cholame- might be interesting," he wrote.

I was hooked. I had to get in that Spyder.

In 1955, New York Times film reviewer Bosley Crowther called James Dean in East of Eden "a mass of histrionic gingerbread." Perhaps not the most flattering description, but the kid from Indiana was just getting his start, and although he would die before the release of "Rebel Without a Cause" and "Giant," his reviews would get better and his star would begin to shine its seemingly everlasting brilliance.

Today, 50 years after his death, Dean's legend is alive and well. It's alive on DVDs,
in shopping malls, and in catalogs where it's used to sell everything from Lee blue jeans, Rebel cologne, Barney's New York clothing, Porsches, and Chryslers to the James Dean clothing line, featuring leather jackets, T-shirts, and whatnot available from the official James Dean web site. 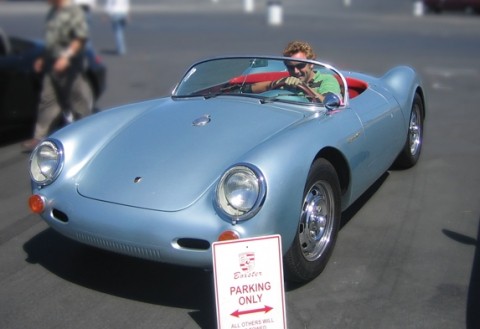 #It's not known how much money the James Dean image makes yearly, or even who receives the money at the end of the day. After all, Dean had no wife or children when he died on Sept. 30, 1955, but 50 years later the image not only lives, it thrives. And it forced me several months ago to ask the simple question: Why? In my mind, even without ever seeing a single James Dean movie, I had an undeniable image of the brooding, handsome rebel, and I had never even heard him yell, "You're tearing
me apart!"

I asked Christopher Sharrett, author of numerous books and articles on film and professor of communications and film at Seton Hall University, how it was possible that I could have such a vivid image of someone that I had never even seen act before.

"From a very hardball, pragmatic standpoint it's due to the fact that sections of industry have been promoting the image through his estate, and people who currently own rights to his image have been selling posters and calendars and what have you," he said. "And of course that begs the question, why do people buy them?

"You could argue that it's kind of a created want in a way, but I think there had to be some kind of mystique surrounding that image for it to work."

"The original reason for the power of that image, just like Elvis or Marilyn, had to do with the art that he made," said Hagopian. "And I think Elvis and Dean in particular are examples of pop culture artists whose work was really remarkable and innovative."

Even Bosley Crowther's reviews of the three Dean movies, two of which were published after his death, begin to show an appreciation for the mystique.

In the "East of Eden" review, the only review Dean would have ever read, Crowther writes that Dean "scuffs his feet, he whirls, he pouts, he sputters, he leans against walls, he rolls his eyes, he swallows his words, he ambles slack-kneed- all like Marlon Brando used to do. Never have we seen a performer so clearly follow another man's style. Mr. Kazan [director of 'East of Eden'] should be spanked for permitting him to do such a sophomoric thing."

But after Dean died, Crowther's skepticism seemed to fade as he revealed his appreciation for Dean in the review of "Giant":

"It is the late James Dean who makes the malignant role of the surly ranch hand who becomes an oil baron the most tangy and corrosive in the film. Mr. Dean plays this curious villain with a stylized spookiness- a sly sort of offbeat languor and slur of language- that concentrates spite. This is a haunting capstone to the brief career of Mr. Dean."

Even though he only made three movies, Dean had hit Hollywood hard. "He is American popular culture's image of eternal youth," said Sharrett. "There was a punk saying in the '70s, you know - 'Live fast, die young, and leave a beautiful corpse,' and that's embodied to the T in James Dean."

All except, literally, for leaving a beautiful corpse. Dean collided with Donald Turnupseed at the intersection of highways 41 and 46 at twilight and died on the way to the hospital in Paso Robles. His passenger and mechanic, Rolf Wutherich, survived the crash, and Turnupseed, a Cal Poly student, suffered minor scrapes and bruises.

Dean's death was, of course, the birth of "the legend."

"Dean is still recognized as- even by the current generation of young people- the father of the American youth culture that came into being after World War II," said Sharrett. "Dean came in at the right time in various ways."

A growing anti-establishment culture, baby boomers with disposable income, growing cultural sexual consciousness, and an industry reaching out to a younger audience all combined to propel the Dean myth to almost dizzying heights, said Sharrett.

"He's kind of like Orpheus or Dionysus, the figures from antiquity who are kind of androgynous. They're challenges to a society, they're very charismatic, they die young, and they're martyrs, actually. It's an old, old myth. It's the story of the dying and reviving god. You could say Dean, in some way, without stretching the point too much, is kind of a messianic figure.

"He symbolizes the promise of eternal youth, eternal rebirth, because you've got this image after all. But the fact is the image we have of him is this blond, good-looking guy with that interesting squint, that kind of wary look as if he's skeptical of the whole world with his red jacket and his tight jeans, and that very interesting sexuality, which has not been transcended."

#And the likelihood that it will ever be transcended may be small. Hagopian thinks the mass media has something to do with it. "The thing about actors in particular today, they never leave us wanting more because we've got all we can stand. Not only the movies, but also every supermarket wall is papered with these movie stars. You're sort of left wishing they would go away."

And it's the same mass media play, said Hagopian, that after the 1970s kind of created the pop-culture image of James Dean. "Ironically Dean is more available then ever before in terms of his image being repeated, and less available in terms of the richness of the content that lies behind that image. And I think that's sad, really."

Back at Laguna Seca, Jiloty rocked through the gears. He had given me earplugs, which I questioned at first but quickly realized was essential.

Going into turns he jacked the shifter down into second and leaned his body into the turns, holding the wheel with two hands. The tires squealed. I had cranked the single waist-belt down, but I was still sliding across the red leather, holding the inside of my door so I wouldn't slide into Jiloty, which was basically impossible because the Spyder
is more comparable to a large kayak than a car. Just getting in and out is an exercise in flexibility. The low-profile windshield seemed like a joke, just a way to push the warm Monterey air right into my face.

Around one of the more casual turns, I yelled over the engine rumble and asked Jiloty if the Dean legend had anything to do with his Spyder purchase. He said he thought that certainly added to the appeal for a lot of people who own Spyders, but he simply loved Porsches of all types; this wasn't his first.

"So have you pushed the car this hard before?" I said, expecting to get brushed off and given a story about the one time he rallied it down Highway 1 or something.

"No," he said. This was the first time he had it on a track. He had only owned it for a month or so.

I had done the age math before. Dean was 24 when he died. I'm 24 now. I'm younger then Dean is when he died, but a week after this story comes out, I will have outlived the legend. So when Jiloty took the infamous "Corkscrew," a tight downhill S-turn at Laguna Seca, I was thinking about my door busting open and me rolling out over the pavement. I was thinking maybe this was a Darwin Award waiting to happen. I was thinking about outliving Dean. And I was also trying to do another kind of math, too.

As Jiloty jumped into fourth, the Spyder's highest gear, I stole a peek of the small speedometer on the Spyder's silver dashboard. My body was pinned against the seat. "That looks a lot a like 100 mph," I told myself. "And that looks a lot like 110 mph. Wow, I'm going to die in this thing. But, unlike Dean, my legend won't live on."...

Staff Writer John Peabody is a reporter without a cause.
E-mail him at jpeabody@newtimesslo.com.

The dirt on Dean

50th anniversary at the Jack Ranch Cafe in Cholame

There will be an antique car e show with bands and festivities , and yes, Spyder owners will certainly show up.

After Dean's death, George Barris, who is famous for creating movie cars like the Batmobile from the 1960 1960s "Batman" TV series, purchased the wrecked Porsche Spyder. The car was stolen while on a national tour to warn youth of the perils driving fast. The Volo Auto Museum in Illinois is now offering $1 million for the missing car. Although if you own it, you could probably get more for it on Ebay eBay ...