If you are a current or former LuLaRoe consultant interested in sharing your experience with New Times, email Staff Writer Malea Martin at mmartin@newtimesslo.com.

When Genevieve Balicki first moved to San Luis Obispo, she was a stay-at-home mom caring for her two young kids while her husband worked full time.

"We'd been here for a couple of years, and I just happened to be at a party for a friend, and this woman had on super soft leggings," Balicki remembers. "They were really bright colored, and she was like, 'You need to feel these.'"

Her friend told her the leggings were from a company called LuLaRoe. People can join and become "consultants," as the company calls them, and then sell merchandise from their homes—it sounded like the perfect gig for a stay-at-home mom.

"Then I just happened to see an advertisement for a [LuLaRoe] house party in Morro Bay," Balicki said. "I went and I bought a couple pairs of leggings, and I bought a maxi skirt."

While she was there, another consultant encouraged Balicki to try selling.

"She was also a stay-at-home mom, and her husband worked, and she was doing it from her house," Balicki said.

In early 2015, she decided to take the leap and buy her first box of LuLaRoe clothes to begin selling.

"I honestly got into it because I really loved wearing the clothes and they made me feel really good," Balicki said. "I liked the way they looked on my body, I liked how soft and comfortable they were. I felt like I could still look cute and run after my kids."

For Balicki and thousands of other women, LuLaRoe was an opportunity to stay at home with the kids while helping to support their families—to "create freedom from fashion," as LuLaRoe's website puts it. What distinguishes LuLaRoe from other fashion brands is that you can only buy the company's clothes from consultants.

Balicki sold for about two years. Through the experience, she made friends who she's still close with today, and she continued to wear the clothes even after she stopped selling.

But as the 2021 documentary LuLaRich reveals, others didn't have such a positive experience. What started as a way for moms to sell clothes, make money, and build a community, turned into what some call a textbook pyramid scheme.

As consultants recruited more sellers to join LuLaRoe, they could move up into higher tiers and titles: first a trainer, then a coach, and finally a mentor. The higher up you got, the more money you'd make in commissions off your recruits—but not based on the items they sold. Rather, the bonuses were based on the amount of inventory your recruits purchased from LuLaRoe.

"A multi-level marketing company can recruit people and be a legitimate business," Refinery29 explains in its mini-documentary, Inside LulaRoe: Why Women Left The MLM. "The issue, according to the FTC [Federal Trade Commission], is whether you're making money solely from what your recruits purchase, rather than sell."

The Refinery29 documentary follows three women who moved up the LuLaRoe ranks, at one time making tens of thousands of dollars in bonuses a month. They were encouraged to invest much of that money back into the business, buying more inventory from LuLaRoe.

But then LuLaRoe changed its bonus structure in mid-2017 to abide by FTC regulations—and due to mounting public scrutiny—Refinery29 reported. Bonuses were now calculated based on what was sold, which led to huge cuts in paychecks, and women who had worked their way up were suddenly struggling. 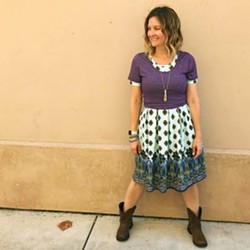 Balicki stopped selling LuLaRoe in mid-2017 because she got a different job that made more sense for her—but she still loved the company. She feels recent documentaries cast LuLaRoe in a one-sided, negative light.

"I got into LuLaRoe to sell clothes," she said. "My goal was never to build a team and become a leader, or a mentor. I loved the clothes. My favorite part about LuLaRoe was when people found clothes and patterns that they liked, and I thought they looked amazing, and you could see how good they felt wearing the clothes."

Balicki believes she left the company at the right time, avoiding some of the negative aspects that recent documentaries focus on: the shipments of hole-ridden leggings, the company's money-back guarantee policy abruptly ending, and consultants left with more stock than they could ever sell—plus, the dozens of lawsuits that have been filed against the company.

"I feel like if you got into LuLaRoe to make a lot of money, you had to focus on building a team, because that's when you got bonus checks from the company," Balicki said. "That's where it started to get more complicated. In that way it did seem more pyramid-y, because if you wanted to make really big money, you had to climb the ladder and create that group underneath you."

Jennifer Nice-Sloan, a Nipomo resident, became a LuLaRoe consultant in 2016, and she still sells the clothes today. Similar to Balicki, Nice-Sloan said she didn't get into it to get rich, but to sell clothes she genuinely enjoyed herself.

"I watched the [LuLaRich] documentary, and I think I have a different outlook," Nice-Sloan said. "When I joined, I did it for me. I think a lot of the negativity stems from these girls who were promised the world from their up-lines"—the sellers at higher levels who recruit new consultants—"and they thought they were just going to walk into this and everything would sell and they'd make all these millions of dollars."

"At first, I would just put stuff online, and it would sell instantly," Nice-Sloan said. "Then it got harder and harder, and you had to work at it. ... If you want something you have to work for it, it's not going to be handed to you."

As LuLaRoe grew in popularity, the company emphasized recruitment over sales—a key criticism made by documentaries.

"I think these girls had a false hope and they weren't given the right training or the right backing," Nice-Sloan said. "Then some of the trainers were just picking up girls to make money off of them, and they weren't helping them."

Despite the negative press, Nice-Sloan stuck with LuLaRoe through the years.

"I had a more positive experience because I wasn't like, 'I'm going to grow my team.' I didn't go that direction," Nice-Sloan said. "With any other job or place, you have your high points, your low points, and everything in between. ... I still enjoy it, I still get excited about it." Δ