Swap, donate, or both!

The next Clothing Swap and Drive will run from 9 a.m. to 4 p.m. on Oct. 12 at iFixit at 1330 Monterey St. For more information, visit asiacroson.com/events/clothing-swap-fall2018-6x9xl-xf459. Cal Poly is also hosting a drive to benefit local crisis shelters that will run until Oct. 26 at noon. Only new or unused items, gift cards, or cash donations will be accepted. Donations can be left in a collection box in the Women's and Gender Studies Department office in building 47, room 25H. For more information visit wgs.calpoly.edu/community-crisis-shelter-donation-drive.

Asia Croson was a college student when she started swapping clothes with her friends and classmates instead of buying new ones.

It was sometime around 2009. Croson was attending school at Cal Poly, and she was broke, busy, and didn't really have the resources to shop every time it was necessary. But she noticed that some of her friends were interested in old things hanging in her closet that she didn't want anymore, and vice versa. So, she thought, "Why don't we trade?" 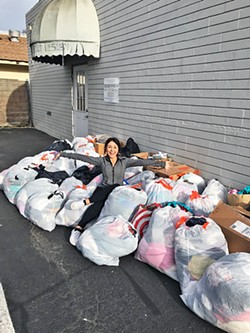 It started small—just a few friends digging through each other's unwanted garb in Croson's apartment—but over the years, its popularity grew among other college students and eventually non-student residents. A few years later, Croson partnered with some Cal Poly sororities to help run the event, and soon more than 200 people were filtering in and out of her tiny downtown apartment four times a year.

That's when Croson decided the event needed to become "more of an operation," and the Clothing Swap and Drive as we know it today was born. Now, nearly a decade after Croson first considered trading clothes, the Clothing Swap is an all-day event hosted four days a year at iFixit and attracts roughly 600 participants.

If you bring clothes you don't want, you can take anything you want home. Whatever gets left behind—usually more than 100 bags of clothes—Croson and her team of volunteers analyze, organize, and donate to Stand Strong, an organization that works to support the survivors of domestic and intimate partner violence, partly by providing shelter space, advocacy, and financial help for those leaving domestic violence situations.

"It's such a win-win," Croson told New Times.

Swapping clothes instead of buying new ones helps the environment, Croson said, and people who attend have a chance to spruce up their closets, save money, and help other community members in need in a simple but effective way.

"You really are at a loss when you have no money and no time, and you want to do something for your community," Croson said.

The Clothing Swap makes it easy to do just that—for pretty much everyone but Croson, that is. To her, each swap means days and days of work, first organizing 20 to 30 volunteers, taking in and going through hundreds of bags of clothes before and during the event, and then deciding which clothes should go to which local charities the day after.

There are typically so many leftover garments that not all of them can go to Stand Strong, Croson said, but that's her top-priority recipient and was the first to partner up with the Clothing Swap.

Croson landed on Stand Strong originally because she wanted the leftover clothes to go back to women locally. Most people know someone who's been in some kind of abusive relationship, she said, whether physical or emotional, and a lot of times the victims of those situations grab what they can and leave without much else.

Stand Strong doesn't have the space to store clothes or the staff to go through them, however, so donations from the Clothing Swap go to United Voluntary Services (UVS) Thrift Store, which then gives Stand Strong clients vouchers to come into the store and get clothes free of charge. That indirect donation process was born out of both necessity and Stand Strong's broader goal of empowering survivors of domestic violence, according to Executive Director Kirsten Rambo.

"We're not here to decide what you need for you," Rambo said. "Because that's been such a hallmark of the abuse they've been through."

Domestic violence is incredibly complex and often includes deep-seated manipulation, isolation, and multiple forms of abuse, according to Rambo. When one person in a relationship repeatedly and systematically uses abuse to gain and maintain power over another—and it happens over a long period of time—the victim is typically pretty deep in before he or she realizes how truly bad the situation is.

Abusers often isolate their partners from family, friends, and co-workers. Financial abuse is common, Rambo said, and abusers can make it difficult for their partners to hold jobs by harassing them at work until they're fired. It's not uncommon for abusers to take out credit cards in their victims' names and ruin their credit, Rambo said, force them to hand over any money they do have, or support them financially so they feel they don't have the means to leave.

People who come to Stand Strong looking for help typically don't have much more than the clothes on their backs, Rambo said. They don't have anyone to go to, they often don't have much money, and they need help rebuilding credit, getting jobs, and securing housing.

For these survivors, the opportunity to pick out clothing for themselves and their children at a thrift store can help them regain a sense of worth.

Donations from events like the Clothing Swap are endlessly helpful to Stand Strong clients, Rambo said. Clothes, food, toiletries, baby wipes, and especially gift cards and gas cards, all make a huge difference in the lives of domestic violence survivors.

"The folks we serve are trying to rebuild their lives after this trauma," Rambo said. "[Donations] can make the difference between someone getting a job interview or not." Δ