Volunteers appointed to the service of the U.S. Coast Guard (USCG) are often paid, but there are also those who aren’t, like the men and women in the USCG Auxiliary.

Established by Congress in 1939, and then later re-designated in 1941, the auxiliary supports all Coast Guard missions except for direct law enforcement or military functions.

One such volunteer is retired LA Police Department officer Tom Shaw, who’s been with the Coast Guard Auxiliary for the last 18 years. Shaw was working at West Marine in Santa Barbara, living the retired life, when a customer told him about the monthly auxiliary meetings at Santa Barbara Harbor Marine Center and invited him to come. Shaw found the meeting entirely positive and decided to volunteer. 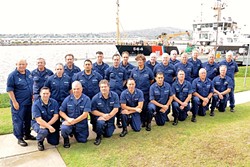 To be an auxiliary volunteer, you don’t need any prior skills, a boat, or even a real desire to go out on the ocean, Shaw said. However, one must endure a battery of training courses ranging from seamanship to inspecting waterborne vessels for proper safety equipment.

Auxiliary volunteers are arranged into groups called flotillas. Some members use their own boats and some members have no boats, but they all get to wear uniforms. Currently, Shaw is vice flotilla commander for Flotilla 7-1.

Volunteers aren’t allowed to participate in direct law enforcement and military functions, such as drug interdiction operations, and they’re not allowed to make arrests, but that doesn’t mean they’re not part of the action.

In some instances, they get to perform vessel inspections on large ships—such as container ships—as a team, including safety and contraband inspections.

Their missions also include search and rescue. In Shaw’s nearly two decades with the auxiliary, he’s experienced many a boater in distress.

Once, Shaw was with his wife, boating the Channel Islands, when he witnessed a man, who was about 60 years old, kayaking with his son. The father was having a medical emergency and Shaw was able to bring him to safety.

Another time, during a Fourth of July weekend, Shaw assisted a group of seagoing revelers back to Ventura Harbor after their boat engine wouldn’t start.

The USCG sometimes reimburses the volunteers for food and fuel costs depending on the mission, Shaw said. There’s also lighter duty, such as beach cleanup and informing citizens of the laws regarding pollution.

Volunteers can also get qualified to become instructors. The USCG flew Shaw to Costa Rica where he spent three weeks on a 378-foot cutter to teach safety classes to its crew.

One of the more popular qualifications for volunteers is “aux chef,” Shaw said, which trains them to become galley chefs.

The training is extensive but it’s not all for nothing. You can give as little or as much time as you want, but you’re expected to do something, Shaw said.