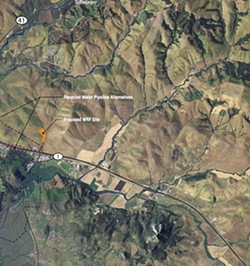 Among the individual residents who spoke against the project during public comment, representatives from Citizens for Affordable Living, Morro Bay Action Team, and Home Front Environmental Justice Morro Bay also expressed their opposition.

"This consolidated hearing violates the Coastal Commission's own mission statement and code based on the substantial amount of Morro Bay residents' protests against this rate increase, the associated illegal results of the Proposition 218 as dictated by the Morro Bay City Council, and based on the incomplete status of critical studies," said Dan Sedley, co-chair of the Citizens for Affordable Living.

In order to fund the nearly $125 million cost of construction, the city held a Proposition 218 hearing to increase household water and sewer bills by a maximum of $41 per month—it passed September 2018.

Residents challenged the City Council for not counting 1,000 of the protest votes. The city had deemed them not valid because they were either undated or marked with a date that was prior to the public notice of the proposed rate increase.

In 2019, the city counted and validated the protest votes in question, but the resulted amount was not enough to prohibit the council from approving the rate hike.

Another funding avenue for the city is a state revolving low-interest loan, which it's currently applying for, and an Environmental Protection Agency low-interest federal loan. If the city is successfully approves it, such loans could take another $5 to $7 off a month of the surcharge.

Protesters also raised the issue of affordability regarding the rate hike, not enough public input, and claimed the city of Morro Bay is rushing the project.

Dan Carl, the Coastal Commission's deputy director, said the commission respectfully disagrees. The surcharge, he said, is meant to pay for the project and ensure a stable funding stream for the future.

"As mentioned before, the city has fostered significant local participation including creating a citizen's advisory committee, having over 50 public meetings on the project over the past two years alone, and making project changes based on that public input," Carl said.

Morro Bay City Manager Scott Collins said there isn't a rush on the project as it started in 2003.

"This commission gave us the proper and appropriate direction to move this massive public infrastructure inland to protect it from coastal hazards and preserve this important infrastructure for future generations," Collins said.

The long anticipated Water Reclamation Facility is slated to be at the intersection of South Bay Boulevard and Highway 1.