Local attorney and activist Tarren Collins had just recently sworn off volunteer work to focus more on her own personal life in 2014 when she came across recently installed fences and "no trespassing" signs blocking a portion of her favorite hike at Ontario Ridge. A steep, straight slope above Cave Landing connects the Shell Beach Bluff Trail with the ridge, and it traverses land privately owned by Rob and Judy McCarthy, who have been embroiled in a battle to build a home on the property for around a decade. 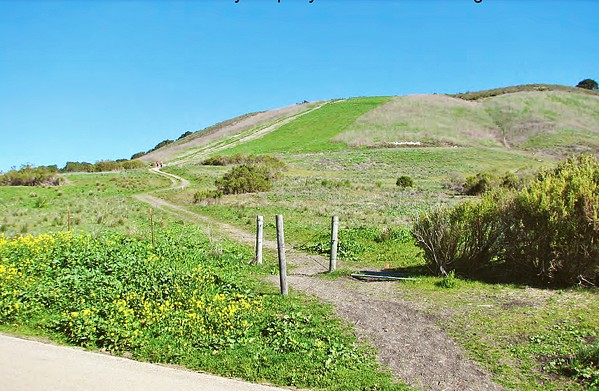 With years of experience practicing land use law, Collins knew this was something she wanted to fight. She's been involved ever since, first getting the McCarthy fences removed and then raising awareness among other community members about public access issues in the area. Most recently, Collins and two others successfully appealed San Luis Obispo County's 2017 approval of a plan to move a portion of the Ontario Ridge Trail off the McCarthy property and replace it with a similar trail nearby.

At a meeting on Feb. 12, the California Coastal Commission unanimously voted to deny the McCarthys' trail relocation proposal, heeding the warnings of a staff report that said the project is fraught with legal and environmental issues.

"This trail has a very loyal following of trail users that specifically seek out this trail due to its unique slope and stunning coastal vista," the Coastal Commission staff report reads. "The county-approved project is inconsistent with Coastal Act and [Local Coastal Program] public access and recreation policies because it effectively extinguishes this unique and heavily used public trail, thereby reducing access for those members of the public who enjoy the existing trail for its unique attributes that would not be replicated by the county-approved replacement trail."

The Coastal Commission decision effectively overturns a coastal development permit that the San Luis Obispo County Board of Supervisors awarded to the McCarthys in 2017. Using the permit, the couple planned to rid their property of its existing portion of the Ontario Ridge Trail and public access easement, which was created in 2009, replacing them with a new easement and trail on a neighboring property.

Collins and former Coastal Commissioners Erik Howell and Aaron Peskin appealed the county's approval of the project, contending that the relocation would result in lesser views for hikers, significant impacts to the environment, and that it simply isn't legally allowed by the county's access easement.

"There's layers upon layers of protection in this area and they were just overlooked by the county," Collins told New Times. "I hope going forward that the county can take a more active role in enforcing the law, which protects public rights, and not just cave to those who want to develop."

Several community members who called and wrote to the Coastal Commission prior to the Feb. 12 meeting agreed, arguing that the grading required to build a new trail could harm sensitive habitats, recourses, and sacred Chumash archaeological sites in the area.

But one Avila Valley community member argued that the replacement trail proposed by the McCarthys would offer a safer and more environmentally friendly option for local hikers. He said the current trail is so wide and steep that people—those who are even able to scramble up the incline—often create their own trails through the grass where it's less slick. Sometimes, he said, vehicles drive up to the top of the hill and camp out there.

SLO County 5th District Supervisor Debbie Arnold voted in favor of the replacement trail project in 2017, and she said the project was the result of a lot of research and deliberation. There's no doubt that the Ontario Ridge Trail is loved locally, but Arnold said it's not safe. The trail proposed by the McCarthys would have been more accessible for everyone.

"I was disappointed that the decision of the Planning Department and Board of Supervisors was overturned because I thought it was a local decision," Arnold said.

Fred Gaines, an attorney for the McCarthys, agreed. Gaines called the current trail a "gutted service road with a 40 percent slope." Hikers are often injured on that steep portion of the trail, he said, and rain runoff has led to significant erosion of the hill. The replacement trail is longer, it ends with the same sweeping views of the coastline, and the McCarthys would pay entirely for its construction and maintenance.

"The new trail is safe," Gaines said. "It meets all of the requirements for a regular hiking trail in terms of incline, in terms of width, in terms of amenities. It's a real hiking trail, not the gutted out service road to the county's utilities at the top of the hill."

Gaines also noted that the McCarthys only want to move the trail because that's what they were asked to do by the Coastal Commission when it denied the couple's application to build a house on the property in 2013.