The California Coastal Commission is considering a proposal that would stop off-roading in the Oceano Dunes while still allowing drive-up camping on some portions of the beach. Though it's an attempt to strike a compromise between off-roaders and environmentalists in the decades-long battle over the dunes, neither side is confident in the plan. 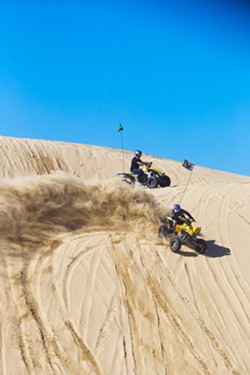 In a Jan. 28 press release, Coastal Commission staff briefly outlined tentative recommendations for the future of the Oceano Dunes State Vehicular Recreation Area (SVRA). A full report is still in the works, but in the release, staff suggest that the Coastal Commission will consider a plan that would eliminate off-roading in a five-year phased approach. The Pier Avenue ramp would close to vehicle entry, and ADA vehicular access and $10 car campsites would be available on the beach between West Grand and Pier Avenues.

While the proposal would initially increase beach camping, the park would be left with roughly the same number of spaces it has now after the five-year transition, but they would be farther north.

"Closing the Pier Avenue vehicle ramp will enable the underserved community of Oceano to directly connect to its beach, which could bring with it the types of opportunities that help other California beach towns prosper," the press release reads. "These changes are likely to impact existing businesses catering primarily to OHV uses, but there would also be expanded opportunities for businesses catering to lower-impact beach and dune uses."

Coastal Commission Central Coast District Supervisor Kevin Kahn said the full staff report will be available on Feb. 16. The Coastal Commission will host a virtual informational hearing regarding the recommendations on March 18.

Longtime Oceano resident Charles Varni would love to see the Coastal Commission do away with off-roading on Oceano's beachfront entirely. Varni is part of a relatively new group called the Oceano Economic Development Council, which generally believes that the only way to turn Oceano into a thriving beach town is to ban vehicles from the beachfront.

But he's not confident that's going to happen. California's off-roading community is big and powerful, he said, and the Coastal Commission has been swayed by their lobbying efforts in the past.

"State Parks, I can assure you, is going to look at this and go, 'Uh, no,'" Varni told New Times.

The proposal to close the Pier Avenue entrance has pros and cons, he said. While it would reduce off-roader traffic in Oceano's neighborhoods and give Pier Avenue a chance to become a walkable business district, it could also create heavy traffic at the Grand Avenue entrance and across the beachfront.

To Varni, the best compromise would be to close both entrances at Pier and Grand and open a new one at the Philips 66 site, which is closer to the SVRA itself and would at least remove the need for vehicles to drive across the beach. Still, Varni said he's looking forward to seeing more of the Coastal Commission's proposal.

"We don't have the full staff report yet and that presumably is really going to spell out what this option looks like," he said. "So we're all kind of in a wait-and-see mode."

Dan Hensley is another Oceano resident and an avid off-roader. He said a ban on off-roading would be detrimental to the local businesses that rely on tourists.

"Why do they want to kill the economy in a little town where it is already so expensive to live?" he said.

He and other off-roaders plan to fight the closure with all they have and instead push for the implementation of a fence that would reduce the spread of dust to nearby communities. Hensley isn't comforted by the plan to continue car camping on the beach. He's watched the SVRA shrink slowly over the years, and he wouldn't be surprised if the Coastal Commission or State Parks eventually went back on their promise to keep campsites open.

"I don't trust them for anything," he said. Δ