The California Coastal Commission is coming to SLO County this month, and it has plans to take on one of the area’s biggest sources of controversy.

Among a number of items on the Jan. 12 agenda for the commission’s upcoming meeting is possible action on several staff recommendations related to the Oceano Dunes State Vehicular Recreation Area. The 3,600-acre area is both a popular spot for off-road vehicle enthusiasts and home to a sensitive ecological system and some endangered species, all overseen by a complex web of various state and local agencies and fought over by a number of competing advocacy and interest groups. 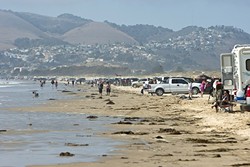 “As a result, there has historically been a tension over how to strike an appropriate balance between providing for vehicular recreation and protecting dune and related coastal resources,” a commission staff report stated.

The commission originally approved a coastal development permit for the dunes in 1982 to delineate restricted areas, establish entrance and vehicle staging areas, and outline use and vehicle limits. But much of that permit was geared toward interim measures for monitoring, continual study, and adaptive management of the park, according to Dan Carl, the commission’s director for the Central Coast. The new recommendations were developed to address many of those very issues, Carl indicated.

“We’ve always intended to take it to the next level and make some of the changes we’ve identified,” Carl told New Times.

The staff’s recommendations include transitioning away from using the Technical Review Team, which studies and makes recommendations on resource use management, and finding another more effective method. The report also recommends that the commission modify requirements for the park’s day-to-day operations, as well as changes to monitoring and annual reporting requirements.

While many of the recommendations deal with the behind-the-scenes operations and monitoring of the park, another could yield very real changes to its appearance and the way visitors interact with it on a daily basis.

In its report, staff recommended finalizing access and staging areas at the dunes. The current entrances at West Grand and Pier Avenue, as well as the current staging area, were designated as interim when the commission approved its permit in 1982. The commission was supposed to finalize access points and staging areas within 18 months, but the deadline has long since past, leaving the issue unresolved for decades.

“Our recommendations set up a process to answer that question. It’s a 30-year-old question,” Carl said.

Based on the recommendations, the access points and staging areas could be moved to other locations or remain where they are.

The commission will meet Jan. 11 to 13 at the Government Center on 1055 Monterey St. in downtown SLO. Proceedings begin at 9 a.m.