Coastal protection is on the hook

In the ocean waters off the coast of Cambria, a mottled pinkish 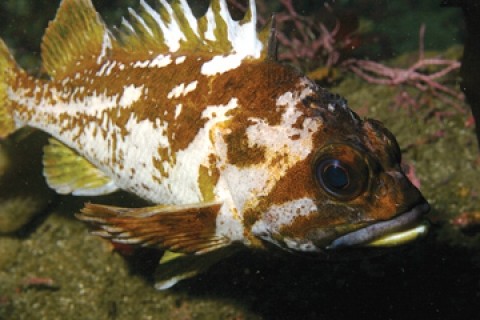 # creature known as a copper rockfish darts into the undulating kelp forest, unaware of a life-changing event happening on Sept. 21. That's the date when the Central Coast over the strenuous objections of local fishermen becomes the first area in California to implement a network of no-fishing zones.

For the copper rockfish, living in an official Marine Protected Area means it can live out its 40-year-life without swimming into a trap or finding a hook hidden in a tasty morsel. For conservationists, the new designations represent a far-reaching way to protect the animals and plants of the ocean for future generations to enjoy.

"The protected areas really are the ecological jewels of the Central Coast. If you're walking on the beach, you can be proud to be a Californian when you look out at the ocean. This is a visionary step," said Kaitilin Gaffney, Central Coast program manager for the Ocean Conservancy.

Local commercial fishermen have a much bleaker outlook.

"They took all of our best fishing grounds away. On Friday [Sept. 21], fishing is going to be over," said long-time Morro Bay fisherman Tom Hafer, who's been hauling up live copper rockfish and other species for the high-end restaurant trade.

The conflicting viewpoints were hashed out over years of meetings and discussions, attended by Hafer, Gaffney, and more than 50 other so-called stakeholders. The California Fish and Game Commission voted in April for the establishment of 29 separate Marine Protected Areas covering 210 square miles from A"o Nuevo to Vandenberg Air Force Base, implementing the Marine Life Management Act passed by the state Legislature in 1999.

Eight of the areas are in state waters offshore from San Luis Obispo County, at Piedras Blancas, Cambria, Morro Bay Estuary, and Point Buchon. Each one has its own rules, ranging from being completely off-limits for all commercial and recreational fishing (nearshore at Piedras Blancas, southern Cambria, and Point Buchon), to allowing only albacore and salmon fishing (offshore at Piedras Blancas and Point Buchon), to allowing recreational fishing only (Cambria), or allowing waterfowl hunting and oyster farming (Morro Bay Estuary). Complete details, including maps, are available at the California Department of Fish and Game website: www.dfg.ca.gov/mlpa.

"Everybody from environmentalists to scientists to fishermen was all a little upset at the end of the process. That shows there's political balance to it," said Don Canestro, a marine biologist who manages the University of California's Ken Norris Rancho Marino Reserve south of Cambria, adjacent to one of the new Marine Protected Areas.

Gazing out beyond the rocky surf spot known locally as Paranoids, to the kelp bed visible in the clear sparkling water, Canestro said the populations of rockfish including vermilion, blue, yellow, olive, gopher, and copper rockfish, among others are "spectacular" in the newly protected area.

"The laws often follow a decline in fish populations they don't usually precede them. This is the first creative proactive means to enhance the fish populations," he noted as a sea otter floated on its back in the waves next to the bobbing kelp.

Marine reserves in other parts of the world have allowed fish to grow bigger and therefore produce more young, said Canestro, referring to a publication called The Science of Marine Reserves by the Partnership for Interdisciplinary Studies of Coastal Oceans.

Copper rockfish, for example, "pop out little larval babies" that float in the currents, he said, adding, "The fishermen lose most of their area, which is sad for them. But in the long term, everybody will benefit."

He's excited about the ongoing opportunities for scientific study and education, which he said will result from the Marine Protected Areas.

"When you conserve habitats like this, the idea is more long term, so future generations can enjoy the marine environment the way we see it. Hopefully it will benefit fishing somewhere down the road too," Canestro said.

But for fisherman Hafer, the decision-making process was "quite a sham."

"We were duped. There was no reason in the world to take away all our best fishing grounds. They left us sand," Hafer fumed, back on shore after his last fishing expedition before the new no-fishing zones go into effect.

Around 60 fishermen from Morro Bay and Avila will now be confined to much smaller areas, where "we'll fish everything out and cause an environmental nightmare," Hafer predicted.

Regulations including quotas, size limits, and seasons plus often-windy weather have meant that local waters aren't overfished, especially after the discontinuation of gill-netting and trawling, he said.

"It's really a bummer. They didn't need to be this extreme. Now it's over for us," said Hafer, adding that he and many other boats will have no choice but to "fish the line" the boundary of the protected areas just as fishermen do alongside marine reserves in many other parts of the world.

He's worried about the many recreational fishermen who take their boats out on the weekends. Now, he said, they'll have to travel farther to legally fish, risking trouble and disorientation on the fog-bound waters.

On Morro Bay's Embarcadero, fishing captain Mark Tognazzini said that the ocean locally is healthy, the local rockfish populations have already rebounded, and he doesn't believe they need any more protection. He pointed to other threats to the marine environment, including power plant cooling-water intake structures and polluted runoff from the land.

"We're the easiest ones to come after. We're the last buffalo hunters," Tognazzini said, leaning on the glass case at his fish market where seven different types of rockfish fillets are for sale.

As a customer bought copper rockfish fillets for four people less than $10 he explained that all rockfish used to be marketed locally as red snapper.

"You'll probably see a lot less rockfish in here after Sept. 21. We're all pretty bitter about it," he said. "With the MPAs [Marine Protected Areas], all the guys who were fishing there will be pushed into a small area, which will become overfished."

As his customer walked out the door with the copper rockfish, Tognazzini noted, "I hope to God that someday I'll say, 'You know, I was really wrong about those MPAs.'"

For Cal Poly marine biology professor Dr. Dean Wendt, who was a member of the Science Advisory Team during the decision-making process and is involved in ongoing monitoring of the areas, "the jury's still out" on Marine Protected Areas.

"The conservation benefits have to [be] weighed against the social and economic costs," Wendt said. "We know MPAs change things. Some species will increase, some species will decrease, but it could be years before we know the effects."