SLO County Sheriff Ian Parkinson stood at the center of two tables. The one to his right featured a row of guns. The one to his left held large bricks of cocaine in clear plastic evidence bags.

They are the fruits of a multi-agency investigation that took down a large-scale drug distribution ring operating in SLO and surrounding counties. 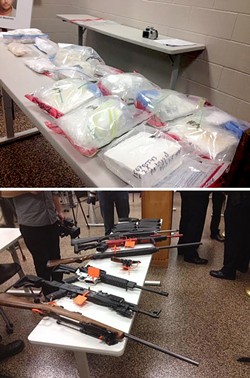 “This is one of the largest cocaine arrests in SLO County in recent history,” Parkinson said at a press conference, flanked by representatives from the SLO Police Department, DEA, and the SLO County District Attorney’s Office.

The press conference marked the end of a lengthy investigation that began in November 2014. Working with a host of agencies, including the SLOPD, DEA, and even the Irish police, members of the sheriff’s Narcotics Unit served multiple search warrants over three days between Aug. 5 and 7 at four locations in Morro Bay, Los Osos, Atascadero, and Paso Robles. When all was said and done, the search netted more than 5 kilograms, or more than 11 pounds, of cocaine, as well as an assortment of firearms, including shotguns and semi-automatic rifles. Nine men were also arrested in connection with the investigation.

Parkinson said that he and the other investigators were surprised to see cocaine being dealt in such large quantities.

“A lot of what we see these days is heroin,” he said. “Cocaine is expensive. … To see this come back is a little surprising.”

Speaking to reporters, Parkinson described the ring as a sophisticated distribution operation, which moved kilos of cocaine to dealers within SLO County and other surrounding counties.

He said that investigators believe the cocaine ring had ties to Mexican cartels but declined name any specific cartel. Investigators also declined to say how exactly the drugs made their way into the county, though Parkinson indicated that the odds were low that they were transported via panga boats, which occasionally wash up on county shores.

As of Aug. 12, five of the nine men were in custody in SLO County Jail. Matarese is still at large, and there is a warrant out for his arrest.