In the not-so-distant past, there was an entire social structure constructed around the culture of lynching. Parents would take their children out of school so they could attend. Postcards depicting the tableaux—the viewers dressed formally in their Sunday best, the men wearing hats—were circulated by participants. People would remove a victim’s appendages, keeping them as a gruesome souvenir of the day’s activities.

There was a code of silence then, by which spectators protected one another. And there’s a code of silence today, one that enshrines the more than 4,500 black victims of lynching, in nameless obscurity. But Santa Clara resident, and artist, Renee Billingslea refuses to preserve this tradition of silence, instead exhibiting the work she has created in response to her research on the subject—“The Fabric of Race: Racial Violence & Lynching in America”—at the Cuesta College Art Gallery through April 2.

A faculty member at Santa Clara University, Billingslea’s first love, artistically, has always been photography. While obtaining her Masters of Fine Arts at San Jose State University, she began to absorb gender and the history of women into her work. She learned that women used activities long considered to be “crafts,” such as stitching and needlework, to create a political voice before they were legally allowed to vote. In response, she created a body of work in which she sewed into her photographs. The university wasn’t certain how to respond to an artist who utilized two very different mediums, so they relocated her studio to the textile room.

“Today as an artist you can wear many different hats and no one’s going to poo poo on you,” she explained. But that wasn’t the case during the ’80s. 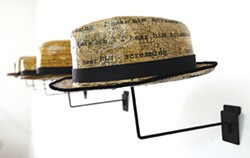 It wasn’t until she married a black man and had a daughter that her work, though already socially charged, began to focus on issues of racism and racial violence. As she researched anti-miscegenation laws—some of which remain on the books, though unenforced, in certain states—she created an installation that she refers to as “very personal.”

“As I was doing that research, lynching just kept coming up,” she explained. “I was never taught about lynching or even about how severe racism was. I felt like there was a pedagogical component to it and I really wanted to make art that provoked thought.”

It started with James Allen’s book, Without Sanctuary, featuring photographs and postcards depicting lynchings. Around 2003 she intensified her research, using both the Internet and the library to study what is considered the United States’ primary lynching period: 1880 to 1961. From there, she narrowed her focus to individual cases, like that of 17-year-old Jesse Washington, a mentally handicapped farm hand who was accused of murdering a white woman. On May 15, 1916 in Waco, Texas, a mob seized Washington from the authorities and alternately burned, lynched, and dismembered him until he died. The postcard depicting the aftermath shows a sea of men’s hats and impassive faces around a charred body. “This is the barbecue we had last night,” reads the back of one of these postcards.

Billingslea began to collect the names of victims, searching for a way to preserve their memory. As part of her thesis project in grad school, she made a quilt, appropriating images she associated with lynchings, along with a color scheme of red, white, and blue. She had never made a quilt, or even consulted a quilting book, but she found herself hand sewing one nonetheless. It would be her first piece of a series that was to become her life’s work.

Next, she began to make shirts for each of the known victims. It became an ongoing project; she now has around 400 shirts, crumpled, dirty, burned, and brown, suggesting the agony their wearer endured, each with a tag and name. Her goal is to eventually create one shirt for each victim, 4,600 shirts in total, filling a room.

The project became an installation, which has traveled throughout California and slowly evolves as she adds new pieces and elements. In addition to continuing her work with shirts, Billingslea began creating hats as well, a response to the mass of them encircling lynching victims in postcards.

The hats are labor-intensive, made by repeatedly layering varnish and paper. Billingslea uses phrases that a spectator or participant might have uttered, such as “I tore off his clothes” and “I could hear him pray.”

“I have eight hats that took me almost nine months because I’m constantly having to layer,” Billingslea explained. “I’m really trying to create that overwhelming sense I feel when I look at those photographs. How can people have justified this horrific act in their minds? If I was there during that period where would I have been in that?”

Billingslea’s intention is not to shock or horrify, but neither can she afford to water down her subject matter. She must strike a balance where a viewer will be sufficiently capable of grasping the barbarism of the act and walking away from the installation with new information about lynching, and its many victims. It’s not an easy subject to  return to again and again, but, for Billingslea, silence is no longer an option.

“Sometimes people ask me how it is that I make work about the black community and I remember thinking ‘How can I do this? Why am I doing this?’ But really what it always comes down to is I make work about American history,” she said. “This is my history. And I want ownership of that.”

Arts Editor Ashley Schwellenbach thinks it’s easier for people to forget their own crimes than someone else’s. Send vows of reform to aschwellenbach@newtimesslo.com.