Hans Petter Moland directs this action thriller about snowplow driver Nels Coxman (Liam Neeson), who's out for revenge against the drug dealers who killed his son. This remake is based on Moland's 2014 Norwegian film, Kraftidioten (In Order of Disappearance). (118 min.)

Glen This is a film that really wants to embody the black comedy vibe of the Coen brothers' Fargo (1996), with its glib tone, comic violence, and frigid locale. Unfortunately, it misses the mark. Nels is a man of few words. In fact, when he comes home to have dinner with his wife, Grace (Laura Dern), she says, "You know you're going to have to say a few words tonight, right?" He replies, "How many?" We think she means to her at dinner, but Nels is being honored that evening as Citizen of the Year in his small skiing community of Kehoe, where he keeps traffic flowing as the sole snowplow operator. His son, Kyle (Micháel Richardson), is a baggage handler at the local airport, and he unwittingly becomes the target of a drug ring thanks to a workmate who's been running cocaine. Kyle is found dead in nearby Denver of a supposed heroin overdose, but we know the truth. He was picked up by Speedo (Michael Eklund) and Limbo (Bradley Stryker), two of drug kingpin Trevor "Viking" Calcote's (Tom Bateman) henchmen, who murdered him. Once Nels gets wind of the gang, he goes vigilante on them, taking them out one by one as he works his way up the ladder to Viking. Some Citizen of the Year, eh? Meanwhile, Viking thinks rival drug runner White Bull (Tom Jackson), who runs a gang of Native Americans, is after him in a turf war. To add another complication, Viking has a son, Ryan (Nicholas Holmes), with his feisty ex-wife, Aya (Julia Jones). The highly intelligent kid becomes a target of White Bull. About the only local law enforcement that seems to care about what's going on is Kim Dash (Emmy Rossum), a rookie cop in the Kehoe Police Department. All these characters are headed for a showdown that's not quite worth the wait. 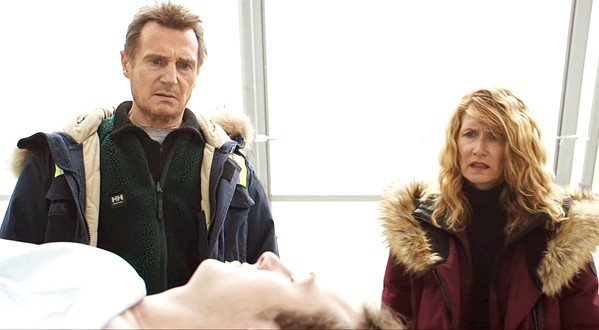 Anna Cold Pursuit works hard to be a memorable out-of-the-box film but unfortunately lacks any elements that transcend its mediocre action revenge category. Neeson is a shoe-in for Nels, the man of few words with a lot of tricks up his sleeve. He's got a simple life—a solitary albeit boring line of work, a wife and son who think he's swell, and a cabin on top of the snowy hills of Kehoe. The town has an interesting vibe, both catering to the out-of-town skiers that flood in when conditions are good and townies who suffer the weather when it's abysmal. I'm not sure if this film got changed or watered down for American audiences; I personally would think a director so bold as to remake a movie in another language would have a pretty solid piece of work. If this film had risen to the level of Fargo, I would have no question why it was remade, but unfortunately this one just falls flat for me. The villain Viking is evil enough, but in a pretentiously obnoxious way. I mostly wanted him taken out just to get him off the screen. His minions hint at backstories here and there, but all in all there's little to care about on that side of the equation other than his whip-smart son. Nels is a fine hero, if not a bit unbelievable. Why is this mild-mannered man super chill with murdering willy-nilly and disposing of bodies? We never dive into his past, which is perhaps where that story lies, but it just felt a little too broad for my taste. 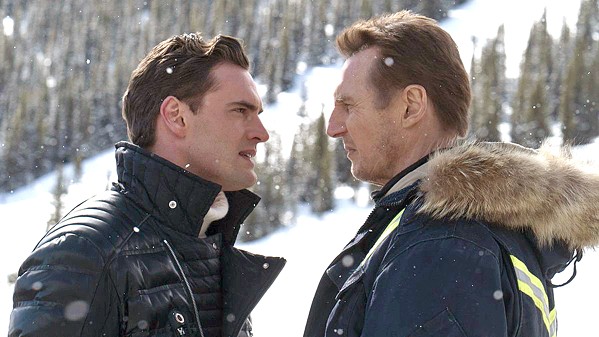 Glen Pretentiously obnoxious is a perfect description of Viking, the scion of his now-dead drug kingpin father who inherited the family business. He appears to be grooming his son, Ryan, to someday take over. When the kid doesn't want to return to school because he was bullied, his father asks him if he read Lord of the Flies, the book he'd recently given him. "All the answers you'll ever need are in that book," Viking tells his son. In short, Viking is an idiot, and Ryan is smart enough to see it. The kid was in many ways the best part of this story, but not enough to save the film from mediocrity. As Nels piles up the corpses, the screen is filled with a placard with the character's name and symbol of his religion, and the placards come quickly. The original film's name translates to "In Order of Disappearance," and the closing credits list the actors in the order of their deaths. It's all meant to be winking and cute, and, like Fargo, there's even a version of the body-in-the-wood-chipper scene. But try as it might, Cold Pursuit is Fargolite at best. Some of its humor is pretty groan inducing. When the Native American drug dealers arrive at the fancy ski resort without a hotel reservation, the desk clerk explains how she can't accommodate them because hotel is full, leading to a mix-up between hotel and Indian "reservation." Ha ha! Equivocation humor. The film's not a total waste of time. If I'd stumbled across it on Netflix, I'd have been happy to watch it, but not even the mighty Neeson made Cold Pursuit feel theater-prices-worthy. Stream this one.

Anna It probably serves its audience better in that capacity than in a dark theater where all focus is put on the screen and thus the storyline, character arcs, etc. I would have been perfectly happy with this playing in the background while I worked on some knitting and sipped a cocktail comfily on my couch. Then it's just Neeson doing his badass thing and a cute kid carrying the story along, and I can be distracted enough to not care that it's less than good. Unfortunately, Cold Pursuit just didn't do it for me, and scenes like the "reservation" hotel bit were downright groan worthy. There was a little fun to be had watching drug pushers having snowball fights and Nels reading from a snow plow catalogue to put Ryan to bed, but the enjoyment was slight and strung sparsely through the film. The death placard was a fun running bit, and the ludicrous nicknames of the thugs might have elicited a smile, I'll admit. Are a few scant moments worth the price of a movie ticket, even a matinee? Not for me. I agree that this is one to wait for home viewing; it just falls too short of good to justify your hard-earned cash. Δ