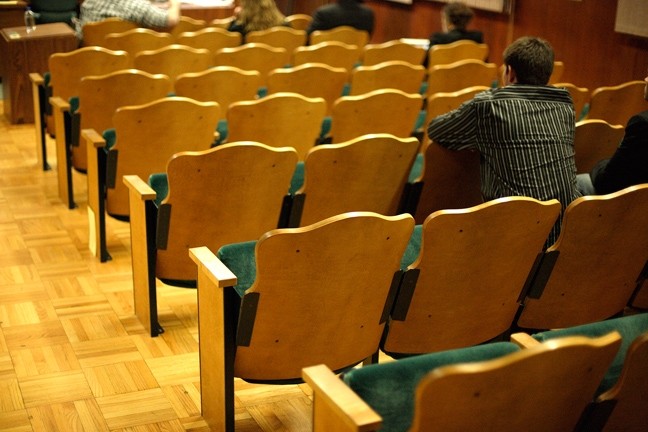 How many Cal Poly and Cuesta students does it take to stage a successful protest? It’s hard to tell, if no one shows up.

For whatever reason, about 1,780 people who pledged emphatically on the social networking site Facebook to “fight the power” and oppose the San Luis Obispo City Council’s proposed “unruly gathering” ordinance on April 20 never even made it to City Hall.

The ordinance, which is backed by SLOPD and allows law enforcement agents to fine groups of 20 or more people on private property who cause a “substantial disturbance” to the quiet enjoyment of a neighborhood, passed through the council 4-1.

According to the ordinance, an unruly gathering is one that takes place on private property and culminates in excessive noise, obstruction of public streets, public drunkenness, disturbance of the peace, or otherwise rowdy or unlawful behavior.

People liable for such a gathering will include those responsible for it—i.e. the hosts—as well as owners of the property. In case a property owner isn’t present during the violation, a fine of $700 for an initial violation will be issued to the people responsible and a notice will be sent to the owner. Subsequent violations in a 12-month period will result in a $1,000 fine to hosts. Property owners can also be issued a $500 fine for each violation after receipt of the initial notice.

After the council approved the ordinance for a final vote on April 6, a group called “Protest San Luis Obispo’s Unruly Gathering Ordinance” popped up on Facebook, encouraging opposition—mostly students—to peacefully protest outside of City Hall.

The group had more than 1,800 “confirmed” attendees when the organizers suddenly called off the protest, instead insisting that students “protest” by attending the meeting.

“The word ‘protest’ in the name of this event, I now realize, may have been misleading,” wrote Sabina Miklowitz, creator of the page. “We want people to protest by attending the meeting and presenting their view in a respectful and orderly manner; we never intended to organize a protest, with rioting and picket signs and all that.”

“[We] feel that this event has gotten a little out of our control, and it seems from the comments that have appeared on the page, that people are expecting it to be a much bigger thing than we planned,” she wrote.

As a result, only a handful of students showed up to the meeting and actually spoke to the council.

Critics of the ordinance argued that the penalties were excessive and its language vague; that it gives a police officer on-site authority to determine who a “responsible” person is; and that it encourages property owners to evict those found to be at fault.

The council also voted to amend the “safety enhancement zone” ordinance—a remnant from 2004’s Mardi Gras ban—to double fines for disorderly and alcohol-related violations on Saint Patrick’s Day and Halloween. The regulation had applied only to Mardi Gras.

As expected, the council also approved the controversial public smoking ordinance, which bans smoking on public sidewalks, in parking garages, and other places where non-smokers might be exposed to unwanted second-hand smoke. Existing tobacco shops, however, will be grandfathered in to allow smoking on premises—provided the businesses install ventilation systems.

The smoking ban also passed 4-1, with Ashbaugh dissenting. It takes effect May 20. ∆