This yearâ€™s Cal Poly commencement will be anything but ordinary. Due to ongoing construction at Spanos Stadium, the Cal Poly class of 2006 will walk in seven separate ceremonies spread out over a span of eight days. Though no one at the school seems to know exactly what the new arrangement will cost, the general consensus is that this yearâ€™s graduation will be more expensive than were ceremonies in years past. 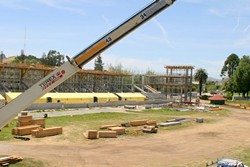 # More than 3,700 studentsâ€”ranging in age from 20 to 62â€”are eligible to participate in Cal Polyâ€™s spring commencement ceremony, which began with the College of Education on June 4 in the Performing Arts Center and will end with the College of Liberal Arts on June 11 in the Upper Sports Field.

â€œThe separate ceremonies give more of an in-house family identity,â€? said Carol Pendergast, advancement director for the College of Education. â€œIt is powerful to focus the ceremony on your own students.â€?

In the past, all of Cal Polyâ€™s colleges graduated on the same day in either a morning or an afternoon ceremonyâ€”and had little input in selecting keynote speakers and format.

â€œThis year, we are having a 1974 alumni speaker, Nevada Barr, speak on a topic related to our college,â€? said Debra Valencia-Laver, associate dean with the College of Liberal Arts. â€œWe also get to read all the participantsâ€™ namesâ€”something we usually donâ€™t do in the June ceremony.â€?

In light of the changes, commencement officials have asked colleges to forego smaller departmental ceremonies.

â€œDepartments like the smaller celebrations,â€? Valencia-Laver said in reference to past practices. â€œThere are no limits on who can be invited to the departmental ceremonies.â€?

Though Cal Poly currently has no plans in the works to permanently switch to college-based graduation ceremonies, the possibility exists.

â€œWe will wait and see if people are so pleased that it is worth the extra cost of numerous ceremonies,â€? said Ed Sullivan, associate dean with the College of Engineering. â€œWe all like giving each student a chance to be recognized individually. It makes the ceremony a little more intimate.â€? âˆ†