Come dance to The Tipsy Gypsies and see a performance by Ballet Theatre SLO on Feb. 12 and 13

It’s Sunday, Feb. 7, and I’m standing in Ballet Theatre SLO’s black box theater and dance studio. Ballet bars line the walls, and hung high along the back of the room is a long row of costumes. In one corner near the risers of a stage, Artistic Director and Resident Choreographer Theresa Slobodnik looks over her notes while dancer Lily Campbell warms up. 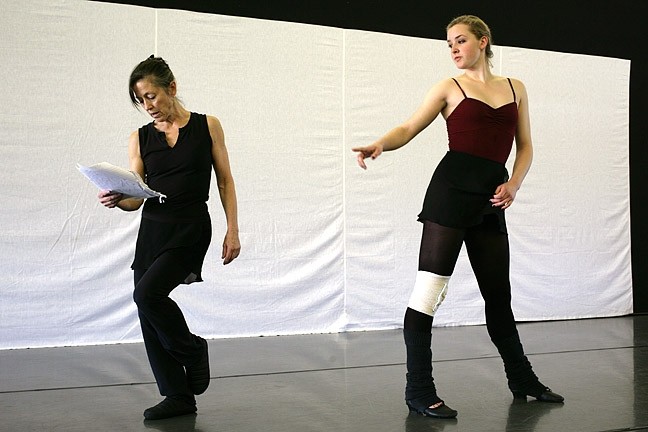 Justin McMillan is the sort of guy who can run 10 miles and then come to a rehearsal, but apparently the 62-mile footrace took more out of him than he anticipated, however that’s not going to stop Slobodnik from putting Campbell through her paces.

The rehearsal is in preparation for two dance concerts scheduled for Friday and Saturday, Feb. 12 and 13, with The Tipsy Gypsies, an amazing Gypsy jazz style band whose music is reminiscent of Django Reinhardt and whose singer, Hilary Langdon, sounds a bit like Billie Holiday. The band will play two sets for attendees’ dancing pleasure, and they’ll perform a new song, “Don’t Waste our Time,” to which Slobodnik has choreographed a five-minute dance piece featuring Campbell and McMillan.

The event is a reprise of a similar event held last year that sold out, hence the two-night run this time. The first time around, Slobodnik created a 20-minute dance set in a 1940s New York City street scene and later a nightclub, and two characters from that first dance, played by Campbell and McMillan, return.

Slobodnik clutches her choreography notes that also include little sketches of her dancers’ positions and attitudes, and she and Campbell get to work.

“Can we go from the beginning of that?” Campbell asks. “I think I’m missing something.”

“From what we learned Tuesday? Really?” Slobodnik asks incredulously.

As they work, Slobodnik explains that McMillan’s character is a gangster type while Campbell is a schoolteacher by day but by night she loves the clubs. In this new number, the schoolteacher is basically breaking up with the gangster, explaining that he doesn’t really know her.

“That’s where you’re getting fast,” Slobodnik corrects. “It’s kind of hard without the other person, but remember where he should be and look like you see him.”

Campbell is willowy and graceful, and despite the lack of a partner, I can feel it when she spins her head and gives him a fierce look that says, “It’s over.”

Between dancing to The Tipsy Gypsies, watching this five-minute choreographed dance, free dance lessons by West Coast swing champion Rodney Ware, and a nightclub atmosphere and no-host bar, these two nights promise to be a great place to bring your sweetheart or meet a new one. I know of at least one dancing schoolteacher who’ll be single.

Ballet Theatre San Luis Obispo (3566 S. Higuera, suite 207, SLO) hosts The Tipsy Gypsies on Friday and Saturday, Feb. 12 and 13, for a dance concert that includes two sets of live music and plenty of space to dance in their black box theater. In addition, Artistic Director and Resident Choreographer Theresa Slobodnik choreographed a special dance performance by Lily Campbell and Justin McMillan to “Don’t Waste Your Time,” a new, unreleased song by the band. In between music sets, West Coast swing champion Rodney Ware will offer a dance lesson. Tickets are $20 presale (bt-slo.org or 440-1439) or $25 at the door. The event features a nightclub atmosphere, no-host beer and wine bar, and munchies. Bring your sweetheart, some friends, or come solo!