"Crafting a cocktail menu is like creating the ideal playlist," according to Robin Wolf, a master mixologist, Cicerone-certified beer server, and level-two Court of Masters sommelier.

The menu needs to create "a perfect blend of moods and moments—both adventurous and familiar—that will keep your guests guessing and coming back for more," she said.

Wolf and her husband, Matthew Hanson, are the co-founders and creative force behind Highwater, which recently opened in Sidecar's former location at 1127 Broad St. in downtown San Luis Obispo. The couple, who currently reside in the "SoHi district" of SLO (South Higuera at High Street), according to Wolf, are familiar faces on the Central Coast. Their recent stints at Paso Robles establishments Hatch Rotisserie and Fish Gaucho, respectively, cemented their status as local cocktail czars. In fact, that was exactly Wolf's title at Hatch, where she managed the bar, racked up prestigious mixology awards, and even ran her own consulting and bitters-production company. Her SLO Bitter Co. flavors, which she calls "the spice rack of mixology," are used in bars from the West Coast to New York.

Her new role as restaurant proprietor means her licensing for SLO Bitter Co. is up for grabs while she devotes all her artistic energy to her new establishment, which celebrated its grand opening in February. Wolf deftly oversees the front of the house as bar and culture director, while Hanson serves as operations and general manager, and music mogul—cranking out well-known tunes, with live performances in the works.

Walking through the front doors of Highwater is a blast through rock's past, with portraits of legends adorning the walls.

"We love [the murals]," Wolf said. "And we love the conversation they create among guests. I knew from the beginning that our aesthetic would include mural work. I come from a big theater family, and my dad did a lot of set design when I was growing up, so I learned out of necessity. "I'm by no means a visual artist, but I'm great at 'making things happen,' and with a tight budget, necessity becomes the mother of invention," she added. "I personally spent many late nights in the space working on the wall murals. Local artist Ian Myers did the three largest murals ... but the ones in the dining room are all me.

"The record-sleeve menus and the vintage glassware and punch bowls are a nod to the belief Matt and I have in repurposing items that still have so much magic in them. It's better for the planet, supports our local economy—so much thrifting!—and at the end of the day, it's pretty cool too."

From menu to music development, art is the driving force behind Highwater, as well as the enduring spark between Wolf and Hanson. 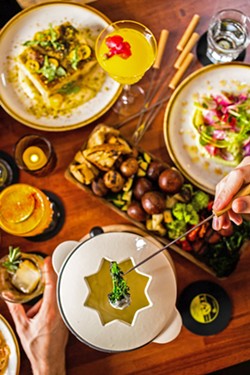 In 2003, the couple relocated to New York City to pursue acting careers, Wolf at The Public Theater, and Hanson at Atlantic Theater Company. They also simultaneously fine-tuned their culinary skills and began reevaluating their long-term goals.

"Our time in NYC—roughly a decade—was spent working everywhere from the diviest of dive bars, to James Beard restaurants," Wolf said.

The couple returned to SLO in 2011 and continued to rack up culinary accolades.

Tales of the Cocktail is the world's largest drinks convention held annually in New Orleans.

During Hanson's tenure as general manager and bar director at Fish Gaucho, the restaurant garnered numerous awards for its cocktail menu, several of which contain SLO Bitter Co. flavors.

"We are a restaurant with an amazing bar program, not a bar with food," she clarified. "That's an important distinction, and we want to pay executive chef Nick DeShon's incredible menu the respect it deserves."

DeShon, who attended culinary school at Le Cordon Bleu in Los Angeles, has refined his craft at kitchens in New York, San Francisco, and Las Vegas.

"In Vegas I worked for Michael Mina, first at a restaurant called Nobhill in the MGM, and then at his namesake restaurant in The Bellagio, which had one Michelin star," DeShon said. "From there, I was able to work my way into the Joel Robuchon kitchen, which is the highest-rated restaurant in Las Vegas. In three years I worked my way up to sous chef." DeShon, originally from Huntington Beach, moved to Paso Robles in 2016 and now resides in Oceano.

"Locally, I helped open the Hatch, and was the chef there for three years," he said. "I also opened Humdinger Brewing [in Arroyo Grande] and most recently consulted on the food programs at Kilokilo Brewing [in Paso] and Pig Iron [in Templeton]."

In the Highwater kitchen, he said, "I like to take techniques I've learned working in fine dining and apply them to more approachable dishes. I also like to work with as many local farmers and producers as possible and keep my menu as seasonal as possible."

"I don't really like to be tied down to any one style of cuisine," he added. "There are French, American, Mexican, and even Filipino-inspired dishes on the menu currently. I believe we like to call it 'seasonal California comfort food.'" Δ