Come out, one and all

The biggest celebration of the year in the gay and transgender community is called Pride. In large cities, the word has become synonymous with house music, drag, and hot young men in tiny shorts, but those aren't the only images that can illustrate the event. 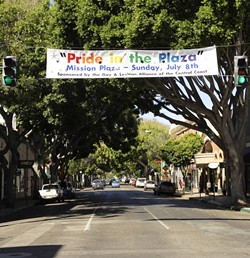 # July 4 through 8, San Luis Obispo celebrates its own version of Pride with an event that flies in the face of old notions about what it means to be gay and proud.

"Our Pride is different," said Robert Kinport, a member of the Gay and Lesbian Alliance and chairman for the events board that organizes Pride festivities. "In other cities, [events] are about the celebration and partying and having a good time. Ours is open for a reason. We want people to feel like they can just wander in. We want the community to celebrate with us."

Pride grew out of protest specifically the New York City Stonewall protests of 1969 that saw a series of violent clashes between gays and police. But these days, Pride is more about celebrating, more about discussions of political issues, such as gay marriage. Especially in SLO, Pride has come to represent a struggle for "normalcy" or equality while maintaining uniqueness.

A bounce house and much more
Over the last five years, the celebration at Mission Plaza has been growing and bringing exuberant acts such as RuPaul, yet it still manages to be a free festival.

Kinport said that a huge portion of the budget of the nonprofit alliance usually referred to as GALA is allocated to Pride. For the organization, the event serves their three primary goals: educating about the gay community, celebrating individual lives and accomplishments as a group, and demonstrating both the community's "normalness" and its numbers.

This year's Mission Plaza festivities on July 8 run the gamut from PG-13 to straight kiddie fare: There will be drag shows, comedy, a mechanical bull, a dunk tank, and music by headliners Jacob and Joshua a pair of identical twins, both gay, who perform as Nemesis Rising and offer their own brand of pop rock. These events are more for adults, but for kids, there's face painting, games, a bounce house, and all the standard family fare locals have come to expect from an event in the Plaza.

"People are surprised that we have a bounce house and all these things that are geared towards family," Kinport said, "but we're no different than our neighbors or anyone else in the community. We have families, and we want to be able to celebrate with them."

About Pride
"Pride is a way of celebrating ourselves and showing the community who we are," explained Loreli Monet, a gentle-natured, 6-foot-something receptionist for the SLO Gay and Lesbian Alliance. "And, in fact, we're just like everyone else. We just go to bed with different people." 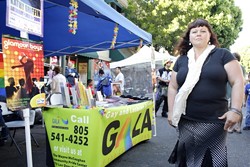 # Pride has more than a half-dozen sponsors, but the group that pulls it all together the group that books the entertainment, acquires permits, and is generally responsible for bringing one of the most unique community events to town is GALA. The group occupies a little office building off of Los Osos Valley Road and Madonna, just big enough for a library and a meeting room that features the work of local gay artists.

The group is headed by a board of eight men and women who range in age from 19 to retirement. As the only group of this type in the area, GALA has the burden or pleasure of serving an incredibly diverse community.

Lesbians, gays, bisexuals, and transgender men or women have unique issues, even among their own ranks, but they are bound together at least in title because they often face the same issues of hate, discrimination, and fear. For a group that's been made the butt of jokes and whose members have been on the receiving end of violence, celebrating Pride is a significant event. To individuals of different generations, it means celebrating a different set of accomplishments and a new set of goals.

"A lot of people think that pride is just a bunch of people getting together and flaunting their gayness," explained GALA's Michael Beck. "Pride here has to do with family. For people who don't know what to expect, I would say bring your family, and eat and play games."

Beck is the youngest member of the board at GALA. At 19, he's still baby-faced, but he's been out of the nest long enough to gain a little perspective. His own life goals husband, kids, dog, and picket fence reflect the current climate. For Beck, the adoption of gay marriage in the next 10 years will become a major issue. For him, Pride is a chance to demonstrate the similarities between people, rather than the differences between gay and straight.

It's not as if gays of the last half-century invented homosexuality, but for members of

generations who came out in an era when their sexual preference was something to be left tucked away in the back of a deep closet or perhaps never explored Pride is still about the struggle to be proud and open with oneself in public. For Ken Kunert, president of GALA, Pride is celebrated a little more cautiously.

Kunert talks fast. He managed to address hate crimes and Pride almost in the same breath each, he said, impacts the community as much as the individual.

"I see just being able to have Pride in SLO as a sign of progress," Kunert said. "I look at Pride as an opportunity to celebrate within our community, and also to educate the larger community that we're here, and we have something unique to offer. Pride is a place where you can be yourself, but still, I am concerned that when I'm walking or holding hands with my partner, someone is going to see it as some weird thing, and not as a sign of love or affection."

The booth
Pride is a high-profile event, but GALA, whose mission is to support the community, can hardly sustain that kind of visibility all year long. When the party's over, SLO will go back to being straight and quiet, but the politics that define gay life will still be there. Teenagers will struggle to come out, middle-aged folks will struggle with old concepts of family, and Baby Boomers will face aging in a health care system that hasn't considered same-sex couples in the same way as it has hetero couples. 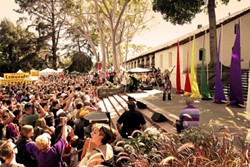 # This is what GALA actually does: It provides a venue for discussion and information and offers resources for empowerment.

The GALA informational booth at the Thursday Farmers' Market in San Luis Obispo exists alongside booths for churches and the major political parties.

Shannon Wyndsong, who staffs the booth each week, believes that the mix is the beauty of it.

"Having the booth has been a real eye-opener for me, because I'm here, the Republicans are here, the churches are here, and we're all equal. That's why it's important that we have this," Wyndsong said. "It's a great tool for education. I think it's changing for the LGBTQ community. It's becoming easier for young people to come out, and that's good. The community itself is changing too. We still have our autonomy, but being gay, being a lesbian, it's becoming more mainstream."

Larger cities have seen retirement homes popping up that cater to same-sex couples, a sign that businesses see a market for the aging community. Cities such as San Francisco and L.A. also have prominent gay bars and districts, including North Hollywood or the Castro, but as anyone from SLO will point out, those places simply aren't this place.

"I've seen big cities. I've seen what they have to offer," Wyndsong said. "I like SLO."

Pride at a glance

Friday, 7/6: The Art Center is showing the work of several gay, lesbian, transgender, and bisexual artists through July 15. A reception will be held during Art After Dark from 6 to 9 p.m. for more info, call The Art Center at 543-8562.

Friday, 7/6: The Gender Illusionists, an edgy and original drag troupe, will be performing at Downtown Brew from 7 to 9 p.m., with a Pride Dance immediately following. Downtown Brew is located at 1119 Garden St. Tickets are $20 for both events, and $10 for just the dance. The event is for patrons 21 and older.

Saturday, 7/7: An informative seminar for couples or singles considering domestic partner status is being held from 11 a.m. to 1 p.m. at the SLO Library. Learn about investing together and managing retirement, health care, and general rights usually afforded to couples by marriage.

Saturday, 7/7: Brassy comedian and Emmy nominee Kathy Griffin will exercise her own brand of humor at the Performing Arts Center. The show starts at 8 p.m. Tickets are $35, and can be obtained by calling the Cal Poly box office at 756-2787.

Sunday, 7/8: Pride in the Plaza is a family event with music, games, entertainment, food, and drink for all tastes. Activities will start at noon in Mission Plaza, but come early for a good seat. Last year, GALA brought RuPaul. This year's headliner is pop-rock gay-twin-duo Nemesis Rising at 4:45.