Come to the table 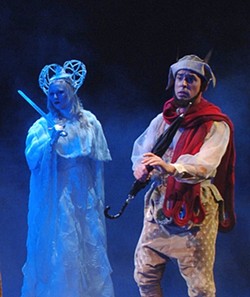 There are three things an adult attending a holiday show on the Central Coast should know. The first is that the intended audience is likely families, meaning that it’s child-friendly fare. Second, there is a reasonable chance the performance will have some religious display, reference, or overtone. The third point ties back to the first; because the performance must cater to families, there are certain obligations that a company must fulfill. (I’ve never found a rulebook that says so, but there must be one somewhere, as these hold true a good 90 percent of the time in holiday performances).

The show must be both magical and uplifting. Animals are characters. There are life lessons to be learned. There is often singing and dancing, even in a theater production. And, most importantly, the Bad Guys are always punished. Each of these conventions holds true in PCPA’s production of The Lion, the Witch, and the Wardrobe, running through Dec. 23.

Don’t get me wrong; the production is not bad. I’m not certain that PCPA is capable of staging a bad show. But if you don’t fall within the target holiday performance audience, this simply isn’t the show for you.

It opens well, with four small figures flickering into reality against the sound of bombs. The lights continue to flicker and the four siblings are on a train, bouncing up and down to illustrate its motion and shifting positions against one another to indicate the passage of time. Director Mark Booher employs similar clever tactics throughout the entire production, in order to overcome the theatrical challenges of creating a fantasyland. The most obvious of these is a circular spinner in the floor of the stage that draws set pieces, and sometimes people and sleighs, across the stage.

The train ride concludes, giving way to the warbling of birds. Peter (Adam Schroeder), Susan (Brenna Wahl), Edmund (Nicholis Sheley), and Lucy (Natasha Harris) have arrived at the professor’s house, and their adventures are about to begin. It’s a whirlwind of exploration and play, which sort of feels like marching time in anticipation of the big event, before Lucy falls through the wardrobe and into a snowy, white world. She is greeted by the all-important lamppost, denizen of fantasy worlds, icon of adventure and exploration to children the world over. Welcome to Narnia. Adult or child, this is a momentous occasion. From here on out, anything is possible, and in a situation where anything is possible, everything is likely to happen. It’s a moment of wonder, even for the cynical.

Tumnus (Michael Jenkinson), a fawn and Lucy’s first acquaintance in the new world, is funny and eager, extending and arching his leg in true fawn-like fashion. There are many dreadful animal costumes in the world—look no further than high school mascots. But costume designers Judith A. Ryerson and Juliane Starks fashioned clever ensembles for wolves, beavers, leopards, bears, reindeer, minotaurs, centaurs, dryads, eagles, unicorns, and stags, among a list of other four-legged, winged, and non-existent beings. Tumnus, for example, is attired mostly in beige, and wears a hat with horns attached. The overall effect is somewhat old-fashioned and subtle, allowing the imagination to fill in what is not there.

It is Tumnus who introduces Lucy, all innocence and naiveté, to the politics of Narnia. The white wonderland isn’t so pure and good, it seems. He also sings, beautifully, of Narnia’s past, a land of “fun and feasting.” His voice is strong, and the song folksy and beautiful. From this point on, the production is dominated by song, which wouldn’t be problematic if all the voices were as strong as Jenkinson’s and the songs as poignant. But the play could probably stand to lose a handful of songs, either because they feel forced into the scene or because an actor’s voice simply isn’t fashioned for singing. In one or two cases, the songs come across as outright religious devotionals, specifically with lyrics like “all who have seen him, come to the table.” It’s true that Lewis made no pretense about his religious convictions, but some productions elect to minimize comparisons between Christ and Aslan. There’s no crucifix clinging to the wall, but if religion—and Christianity more specifically—makes you uncomfortable, this production might have you squirming.

There are a few exceptions to the request for less singing. Edmund’s bizarre and loving tribute to Turkish delight, the first four words of which are “Turkish delight, Turkish delight” is an exception. The song is strange, and unexpected, which was what I had been hoping for from the production. The white witch (Karin Hendricks) has several songs, and her voice and character are so provocative that none of them seems excessive. In fact, her entire performance is perfect from the moment her sleigh races around the corner. This is a sight to behold, two reindeer with winding, sculpted heads at the front and the mad white queen at the reins. She is seductive and manipulative, conjuring hot chocolate and the aforementioned Turkish delight, from the ground itself with a turn of her wand. Edmund’s capitulation to her doesn’t seem so wicked. How could he not fall to her charm, her power, her beauty, her food?

The white witch’s seductive prowess carries through until the moment of her murder—that’s right, I’ve decided to blur the line between black and white—which, for some reason, is a rushed scene with the final glorious battle lasting a mere 30 seconds or so. Instead, the production’s climax occurs when the witch and her henchman sacrifice Aslan on a stone tablet. Dark creatures dance and stomp and howl in triumph and bloodlust as the white witch brandishes a lengthy dagger over Aslan, now bound and shorn. The scene flickers red and orange; there can be no doubt that blood will be shed and the drama of the moment is quite powerful.

As to the other characters, they are all by turn funny, valiant, scared, and innocent. But very few are more than one of these things, creating a vacuum where complexity and depth ought to be. I have seen the majority of these performers fire off emotion, any number of them, in past productions. But this one doesn’t seem to task them to the same degree. I suspect that the actors had fun, and can’t honestly argue that it isn’t a fun performance to watch, but I believe that depth and complexity result in a richer experience still. ∆