Whatever side of the political spectrum you may fall on right now, odds are you’re mad as h-e-double-hockey-sticks. And comedian and satirist Lewis Black wants you to know that’s OK.

“Anger does get a bad rap,” Black said. “It depends how it’s used. You can use it in a positive way.” 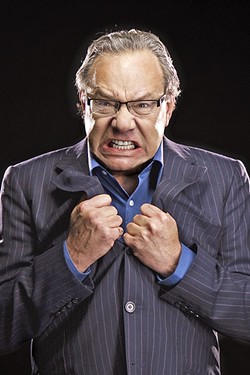 And Black (best known from Comedy Central’s Lewis Black’s Root of All Evil and The Daily Show with Jon Stewart) knows a thing or two about anger. Aside from that wrathful feeling being his comedy bread and butter, Lewis vocally embodied the little red, always-screaming-and-bursting-into-flames character Anger in Pixar’s animated film, Inside Out. And you know what? Angry people get shit done.

“Anger was the one that was the motivator,” Black said of his Pixar persona.

If the last 100 days or so of President Donald Trump’s divisive and controversial administration has left you dazed and confused, Black, a self-described socialist, wants you to know that you’re not alone. (Don’t get him started on POTUS overturning a law that prevented companies from dumping coal-mining debris into rivers.) The comedian and satirist will unleash his thoughts and feelings on all the things he finds irksome and worrisome as part of his maybe less than patriotic Rant, White, and Blue show at Cal Poly on May 12.

“There are no adults left,” Black said. “I don’t know what happened to my generation. In a sense, it’s worse. I’m angrier than I was before. It’s gone to another level.”

As the collective pulse of the country has gradually boiled over the last few years, Black, who regularly takes questions from audience members at the end of his sets, was struck with an idea: Why not tell everyone else’s tales of being ticked off? Black asked people to send him their stories of getting pissed off and all that rage quickly piled up. The end result was The Rant is Due, a weekly podcast series recently released through Audible, where Black reads listener-submitted rants and raves on everything from, “My neighbor’s crazy loud sex is keeping me up at night,” to, “How dare that person put a pickle on my plate?!” While Black sometimes does a little editing of these stories or interjects with his own thoughts, a lot of the time he’s simply reading personal stories verbatim.

“Essentially it’s a show written by my audience,” Black said. “It’s much more profound when you hear the story through the person that’s getting fucked.”

When asked what audiences can expect from his upcoming show, Black spoke in a jovial tone of “a happy, upbeat Christian comedy, rainbows and lollipops. Nothing to disturb them.” While the former playwright turned comedian can promise no deus ex machina solutions to the current political scene, he knows that ranting—like a good cry—can have a very cathartic effect for all involved in the process.

“I come in, and when they leave they feel more sane than when they come in,” Black said. “I think it helps them vent a bit.”

Ryah Cooley is seeing red. Tell her why this article made you mad at rcooley@newtimesslo.com.