No matter how weathered a neighborhood restaurant becomes, as long as it's clean and consistently serves good food it will keep us coming back. That pretty much describes Gina's Italian Restaurant in the old village of Arroyo Grande, which has been serving its loyal customers for 20 years. Like a well-worn La-Z-Boy, the quaint little eatery looks like someone's grandma decorated it, befitting the "historic village of Arroyo Grande." It may be homey and old-fashioned, but Gina's offers comfort in its ambiance and its food at very reasonable prices.

If the decor's more than a tad outdated, one can definitely say the menu is too. But you'd be hard-pressed to find an American who doesn't love Italian cuisine, and Gina's serves the classics: pasta, pizza, scampi, and chicken Marsala. I recently dropped in 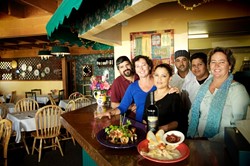 # for lunch and ordered the most heartening type of comfort food: eggplant parmesan, which came with a side of spaghetti dressed in marinara, for just $7.95. For only $2.50 more, you can add a side of soup or a house green salad. I chose the minestrone over the zucchini-sage soup, and found it quite hearty with beans, macaroni (the small salad kind I must say I haven't seen in a restaurant in many years), and vegetables. I was glad they brought a bowl of grated parmesan to leave on the table, which gave the soup some flair.

I was truly surprised at the large portions they serve. I relished the toothsome pasta so perfectly al dente and thought I must've been Italian in another life. I could eat pasta like this every day. The marinara and tender eggplant needed a bit more pizzazz, too (both garlic and basil would've been nice), yet it was tasty all the same. A little more parmesan kicked it up a notch closer to my preference. The food tasted very familiar, and I came to understand why when I later sat down to talk with owner Hilary Kuphal.

The wine list is also quite reasonable: Good quality Pinot Noirs from Bishop's Peak, Laetitia, Stephen Ross, and Talley are fairly priced from $21 to $40 a bottle. They offer Ecco Domanii Pinot Grigio for just $14, albeit a Gallo product but this value-priced wine is one of Gina's top sellers. Zinfandels from Saucelito Canyon, Seghesio, and Frog's Leap are more to my liking for this food, also reasonably priced for a restaurant wine list: $24 to $30. Wines by the glass are priced $5 to $8, so I tried a new local wine named Trifecta, an easy-sipping Grenache blend that complemented my meal.

Before dining there, I had phoned Hilary to provide the news that her place had won the title of "Best Arroyo Grande Restaurant" for the 2007 Best Of issue, and she was beside herself with joy. She started crediting her entire staff, her twin sister Susie Diggins, the chefs Manuel Estrella and Miguel Zambrano, and all of her servers. But she caught me by surprise when she candidly added, "I feel so fortunate, I got into this business as a fluke."

After our phone interview, I couldn't wait to meet her, but I decided to dine at the restaurant first. While sitting there, I definitely sensed the heart and soul of Hilary behind this friendly little eatery. I returned the next day to meet her at the restaurant. She explained that during the two decades Gina's has been operating, it's only had two owners. Hilary bought the restaurant 10 years ago, but the founder still owned the building. Hilary admits she wasn't motivated to remodel as a renter, but six months ago she purchased the building and began tinkering with it.

She remodeled the bathrooms with hand-painted ceramic sinks and small cabinets purchased at Luna Rustica in SLO. Her husband Steve built and installed a handsome new copper bar top. She also pointed out her beautiful fresh flower bouquets and antique plates that brighten up the place with a riot of color, much like Hilary. Her love for her restaurant and staff whom she considers her family has never waned. Yet Hilary candidly admitted she couldn't paint such a rosy picture of her start in the business. Like so many dreamers without previous restaurant experience, she didn't know what she was getting into. Many restaurants fail because of owners who lack business savvy, but this determined woman says she was stubborn enough to make it work.

"I was trying to save my husband from great white sharks," Hilary quipped of their decision to buy Gina's and move to Arroyo Grande from Santa Barbara. Steve was a professional fisherman who harvested sea urchins and abalone, which she describes as a dangerous job. She laughed over her belief that the restaurant would be a nice 9-to-5 job, a family business with her in the dining room and Steve cooking. During the first month, they worked 18 hours a day, seven days a week. She recalled how her 3-year-old daughter Kyle quickly learned how to schmooze customers and their neighbors in the village.

"After a month, I finally snapped. On Saturday night I put out a sign that said closed Sunday," Hilary said. "It was such a relief, and we've been closed Sundays ever since.

"The only thing I didn't do right when we started was put up a big sign that said, 'under new ownership,'" Hilary said pointedly.

Right from the beginning, the Kuphals decided the food should be homemade. Admirably, they lasted seven years, but Steve decided to go back to fishing and she decided to hire professional cooks.

"I got into the business as a fluke and thought I'd take it on myself," said the accountant-by-trade, who only began cooking professionally after she bought the restaurant. "But we went through a metamorphosis when I hired Manuel and he hired Miguel." Both men have a long history of cooking in Italian eateries and both had worked at Giuseppe's.

Nearly everything from the soups, salsa, and marinara sauce to the desserts (except the chocolate ecstasy) are homemade. The chefs also make the butternut squash ravioli, but not the meat or cheese raviolis. Although they originally used Hilary's recipes, she decided it was best to allow Manuel and Miguel to create the dishes as they've learned from their experience in the business.

"I get offended when I see high mark-ups in restaurants, so I've always kept our prices reasonable," Hilary declared. "Here you can get two nice dinners and a bottle of wine for just $60. If you order wine by the glass, then it's only $40. Whenever I dine out, I think about this place and realize I've really got a great little restaurant."

INFOBOX: Eat it up

Gina's Italian Cuisine at 138 E. Branch St. in Arroyo Grande is open Monday through Saturday for lunch and dinner. For more information, call 481-3266.