Comfort me with pasta

After being seated for lunch at Palazzo Giuseppe’s, I immediately scanned one menu section for the comfort food I craved, pasta. When the waiter came up to me and my constant companion, Dan Hardesty, I asked which of the pastas would best provide the soulful dish I craved. Pappardelle alla Ragu ($9), the “gulp down” pasta as noted on the menu, he suggested. Those perfect, fresh noodles, bathed in a creamy Bolognese style ragù with braised veal, pancetta, and Mascarpone cheese was just what my stomach and my soul needed. I’ve been craving more ever since.  It’s the kind of dish I have in mind whenever I recommend a Sangiovese or other appropriate red to pair with a ragù.

Dan ordered the Bologna style lasagna ($10) with meat ragù, cheese, and fresh ricotta. The tomato sauce on it was quite different from that on my pasta and I loved both versions. Although Dan and I usually split everything we order, in this case I selfishly said I preferred my dish and Dan kindly obliged me. Just a couple of months earlier I had another amazing pasta dish from chef Giuseppe “Joe” Difronzo that had me raving about it weeks afterward. His housemade tagliatelle with local Dungeness crab and Santa Barbara ridgeback prawns deliciously dressed in an almond-and-pine-nut pesto with flat-leaf parsley rocked me. Every time I described that succulent dish to anyone within listening range I had them salivating just from hearing about it. Difronzo served the latter pasta to me and three other judges during this year’s Ultimate Chef competition for Central Coast Magazine. And it was highlighted as one of the “notable dishes” we tasted during the chefs’ cook-off.

During another lunch with a friend I had the special: sautéed calamari over locally grown spinach with sundried tomatoes, pancetta, golden beets, cucumbers, and shaved red onions dressed in a very nicely balanced apple-cider vinaigrette, a hearty and delicious main dish salad ($12). 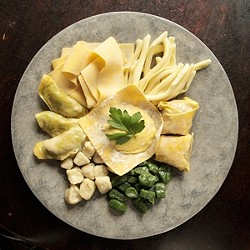 All recipes on Guiseppe’s menus are Difronzo’s, but he lets his chefs get creative with specials. With two Giuseppe’s to keep local foodies happy it’s no mystery that Difronzo’s traditional Italian cuisine always earns top ratings in New Times’ Best of SLO County issue, winning “best Italian food” in May 2009. When he won Best Italian in 2008 I chuckled when Difronzo responded: “My biggest competition is Giuseppe’s in Pismo Beach. People are always coming into the San Luis Obispo Giuseppe’s and asking for a dish we make in Pismo Beach.”

Most locals know the story of Difronzo who established the first Giuseppe’s in Pismo Beach, and it’s been a grand success since the day it opened on November 9, 1988. A Cal Poly graduate in 1988, Difronzo for his senior project designed a family-style restaurant featuring the cuisine of his family’s homeland, Bari in southern Italy’s Puglia region. After graduating, the former Mustang “nose-guard” admitted he didn’t jump right into it:

“I told everyone I was going fishing in Alaska and then I would come back and open a restaurant. When I opened, it took off right away,” Difronzo remembered. “Everybody knew everybody then, all my football teammates and coaches came.”

Difronzo, who comes from a long line of restaurateurs and bakers, doesn’t take all the credit: “It’s not just about me orchestrating this. It’s been a team effort with help from my family and kids, and my staff.” He noted that Giuseppe’s has improved every year as he has evolved as a restaurateur and chef. He praised his parents for instilling their ethics in him and teaching him, “You can start with nothing and be a success.” When Palazzo Giuseppe’s opened I told Difronzo he had good reason to be proud of his spectacular palace. He imported Carrera marble, blue quartzite, and Venetian crystal chandeliers, and that amazing pizza oven from Italy. He responded with a smile: “This is Giuseppe’s grown up.”

In response to the recession, you’ll find nightly specials going on at one of his restaurants. And both Giuseppe’s offer family night dinners every Sunday, Monday, and Tuesday, with a choice of soup or salad, pasta, entrée, the crusty housemade bread, and cannoli for dessert—a great value at only $20 per adult and $8 per child. In SLO he’s added a fabulous Italian style brunch menu (lunch menu is also available), and you can order a bottomless mimosa for $14.

I recommend Difronzo’s label featuring Pinot Grigio, Pinot Noir, and Syrah, offered by the glass or bottle. Like his home garden where he grows his tomatoes, veggies, fruit, and citrus, he grows premium winegrapes for his fine wines. “This is my life, for better or for worse,” Difronzo laughed, “I might as well make it for better.”