A local mom and schoolteacher needs your help

One of the things I love about the local music community is that it is a real community. Sure, drama pops up here and there, but when someone’s in need, you can count on the community to come together, and it has, this time for Kambria Wesch-Doherty, a local schoolteacher who’s battling cancer. 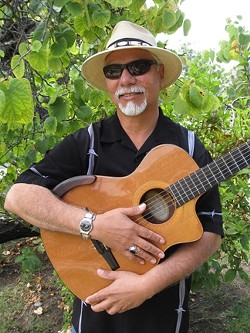 While giving birth to her third child, Willow, Kambria underwent a C-section during which the doctors discovered and removed an enlarged ovary, which turned out to be cancerous. Sadly, the cancer had already aggressively spread to numerous sites in her body. This form of cancer—Neuroendocrine Carcinoma High Grade—is extremely rare and, unfortunately, beyond medical help.

Kambria’s husband Gavin and her three children Griffen (age 3) Kirra (age 6), and baby Willow (two months old) need our help. On Saturday, Feb. 9, Cambria Pines Lodge will be host to a benefit for Kambria from 1 to 5 p.m. Any donations at the door are welcome. There will also be a silent auction. You can donate online at youcaring.com (search Kambria Wesch-Doherty).

Grammy-winner Louie Ortega will open the show at 1 p.m., followed by a 2 p.m. set by Shameless, and a closing set by The Stellar Band at 3 p.m.

“Kambria may only have weeks to live,” said John Wessel of Shameless. “The local support has been amazing, from the Cambria Pines Lodge donating the room and the musicians working for free. Shop owners and restaurants in Cambria and the schools are making silent auction donations and cash donations. Unfortunately, the cancer is spreading faster than originally diagnosed.”

Our hearts go out to Kambria and her family. Pray for a miracle. Donate if you can. Come out to the show and celebrate a beautiful life.

What is it about hard-rocking chicks that make the boys drool and the girls feel empowered? Oh yeah, it’s because hard rocking chicks are awesome sauce! On Thursday, Feb. 7, Nashville Pussy will come screaming into SLO Brew for one of their patented tear-the-house-down, blow-the-roof-off barnburner shows (8 p.m.; 21-and-older; $10 presale or $12 at the door). 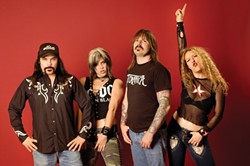 Formed about a decade ago, the rock act features Blaine Cartwright (vocals, guitar), his wife Ruyter Suys (guitar), Karen Cuda (bass), and Jeremy Thompson (drums), and their latest release is From Hell To Texas.

“We allowed ourselves this time to give the songs the chance to turn out as perfect as possible,” Cartwright explained in press materials. “We kept playing the new tracks at our rehearsal room until they really clicked. I feel they’re heavier and grittier than previous releases. The whole creative process took three long years, but the result has been worth the trouble.”

Most of the band’s tracks are goodtime romps, but they occasionally make forays into politics, such as “Late Great USA.”

“Although Blaine’s comical and satirical themes mostly prevail on From Hell To Texas, there are two or three numbers that deal with more serious subjects. ‘Late Great USA’ is a political song; we simply had to vent our anger at certain grievances in this country,” said the band.

Local twang rockers the Dead Volts will open the show.

“We aren’t as easy on the eyes as the feminine half of Nashville Pussy, but if folks can handle chunky bearded dudes playing some dirty twangy rock, I think we can provide that,” said the Dead Volts’ Patrick Hayes. “Nashville Pussy plays some pretty badass dirty rock’n’roll, so we’ll be trying to match that vibe.”

I think you should sit down before we go on. Are you sitting? Because I have some bad news and you really should sit down. OK, suit yourself. If you don’t already have tickets for Dr. John, you’re not going. That’s right. It’s sold out. I warned you! I told you to get tickets. This Friday, Feb. 8, Dr. John will pack SLO Brew in a standing-room-only concert (7:30 p.m.; 21-and-older). The New Orleans icon and piano genius is touring in support of his excellent new album, Locked Down.

DJ Quik returns to the club on Sunday, Feb. 10 (8 p.m.; 21-and-older; $25 presale or $27 at the door), with The Iinterceptrez, Group Home Music, and Oscar Goldman. Quik made a name for himself in the mix-tape ’80s and developed into one of the West Coast’s premier gangsta rappers in the early ’90s.

The Green brings their reggae sounds to town on Tuesday, Feb. 12 (8 p.m.; all ages; $15 presale or $17 at the door), with New Kingston opening. The Green, a Hawaiian band, burst onto the scene a little more than two years ago with their self-titled debut, which made in into the Billboard Top Ten Reggae Album chart.

On Wednesday, Feb. 13, SLO Brew closes out the week with ALO (Animal Liberation Orchestra) and opening act The California Honeydrops (7:30 p.m.; 21-and-older; $20 presale or $23 at the door). Two really entertaining acts for $20? Seriously? These are both bands that have headlined their own shows. This one’s going to be off the hook!

Bust out the neon and parachute pants!

“Zapp revolutionized the computer pop of electro with their trademark vocoder talk boxes and bumping grooves, emulating the earthier side of Prince and Cameo, with a leader in Roger Troutman who was more than efficient at polished production,” according to press materials. “The family group, with brothers Roger, Lester, Larry, and Tony Troutman, grew up in Hamilton, Ohio, influenced by hometown heroes the Ohio Players as well as Parliament and other funk groups.”

“More Bounce to the Ounce,” “Dance Floor,” and “Computer Love” were their three biggest hits, but they also struck the top 10 with songs such as “Doo Wa Ditty,” “I Can Make You Dance,” and “Heart Breaker,” and covered songs like The Miracles’ “Ooo Baby Baby” and Marvin Gaye’s “I Heard It Through the Grapevine” and “I Want to Be Your Man.”

Lisa Lisa and Cult Jam tore it up in the ’80s, performing hits produced and written by Full Force, the six-man performing/songwriting/production team from East Flatbush/Brooklyn, N.Y. “I Wonder if I Take You Home,” “Can You Feel the Beat,” “All Cried Out, “Head to Toe,” and “Lost in Emotion” were a few of their hits.

Seattle-based performer Beth Whitney will bring her ukulele balladry to the SLO Down Pub on Thursday, Feb. 7 (6:30 p.m.; all ages; pass the hat). The self-taught guitarist and singer-songwriter has a sweet voice that may remind some listeners of Norah Jones. Roslin Sinclair of the band REDD, as well as a few other singer-songwriters, will also perform a short four-song set.

Upbeat, funky Steven Roth and his band have been heavily touring in preparation for their upcoming album release and opening gig for legendary rock band The Who at the Staples Center and Madison Square Garden. You can see them at Frog and Peach on Thursday, Feb. 7, and again on Tuesday, March 12.

The husband and wife team of Kathrin Shorr and Tim Burlingame, better known as Sweet Talk Radio, returns to the area with a show at D’Anbino Vineyards & Cellars’ Tasting Room on Friday, Feb. 8. Their music has earned them recurring spots on the iTunes Singer Songwriter chart and the ears of music supervisors on some of today’s top TV shows. Admission is $10, the show starts at 7:30 p.m., and reservations are accepted: 227-6800.

Gary Garrett and Jody Mulgrew play the Steynberg Gallery on Friday, Feb. 8 (8 p.m.; all ages; $15). The two met at a singer-songwriter showcase in 2009 and quickly formed an affinity for one another’s music, sharing ideas and collaborating.

Acoustic Eidolon returns to Música Del Río House Concerts in Atascadero on Friday, Feb. 8 (8 p.m.; $15; call 466-6941 for reservations and directions). Said concert organizer Fred Munro, “Fate usually comes with no strings attached, but for Joe and Hannah, known as Acoustic Eidolon, it came with 18 strings and a love that has grown along with their music. A cello in the hands of Hannah Alkire and a double-neck guitjo in the hands of Joe Scott have together created a blending of Celtic, folk, and world music, which is most intriguing and delightful to listen to.”

Mimi Blais, Queen of the Ragtime Piano, plays a very special show on Sunday, Feb. 10, from 3 to 5 p.m. in Congregation Beth David. The social hall will be transformed into a turn-of-the-century Parisian café! The cover is $15. Call 544-0760 for reservations.

Soprano Katherine Arthur and pianist Louise King will perform a benefit concert to establish an Arts Scholarship for the San Luis Adult School on Sunday, Feb. 10, at 3 p.m. in the Trinity Methodist Church (490 Los Osos Valley Road), where they’ll present German Lieder, the Art Songs popularized by German composers during the Romantic period. Proceeds from the concert will go to establish a scholarship fund so that fixed-income seniors can benefit from Adult School classes. Tickets are $15 in advance (call 549-1222 or online at ae.slcusd.org, Section #300300) or $20 at the door.

Central Coast native Tim Jackson will bring his Americana singer-songwriter styles to Upper Crust Trattoria on Monday, Feb. 11 (6:30 p.m.; all ages; pass the hat). Jackson got his start in the ’80s fronting his rock band, but through the ’90s and into today, he’s transformed himself into a solo performer whose original material will bring to mind the songs of Bruce Springsteen, John Mellencamp, Bob Dylan, and Van Morrison.

Canadian bass master Excision is bringing his “Execution Tour” to The Graduate on Tuesday, Feb. 12. In case you’re familiar with his show, be warned, this concert will not feature “The Executioner” production due to venue constraints, but fans of live electronic music will still no doubt want to check him out! If The Grad could handle his full production, you’d witness “a video-mapping masterwork that displays an impressive 420 square feet of world-class, true 3-D, video-mapped animations guaranteed to daze and amaze fans … [on] the greatest projector available in the world.” I’m not sure how scaled down his show will be, but the music will still deliver the bone-crushing sounds you’ve come to expect from Excision. Paper Diamond and Vaski will open at 9 p.m. Buy tickets at Boo Boo Records.

As a son of the Midwest (On Wisconsin!), I “get” Garrison Keillor and his dry-as-dust humor, and I’m not the only one. He’s one of the most beloved humorists, radio personalities, and authors around. Best known for his long-running radio show A Prairie Home Companion and his fictionalized “hometown” Lake Wobegon, he’s come to feel like a member of the family for many people. On Wednesday, Feb. 13 (My parents’ 59th wedding anniversary! Congrats, Mom and Dad! Love you!), Keillor returns to the Cohan Center at the PAC at 7:30 p.m. for an evening of his wry humor and wisdom in a new evening of comic monologues and thought-provoking observations. Student and adult tickets range from $30 to $78 (call 756-4849).