SunPower's water shuffle in the California Valley has residents wary

Clouds draped across the sky over the Carissa Plains early one recent Friday morning. The long veins of Highway 58 that wind over the valley floor are now dotted by the occasional pack of road crews, or an illuminated sign with the words “NO CONVOY TODAY” glowing yellow.

Teams of construction workers pepper the landscape in the remote California Valley, an area that previously was home to little more than a motel, school, and the few hundred residents who live in one of San Luis Obispo County’s most isolated pockets, where resources are few and far between. 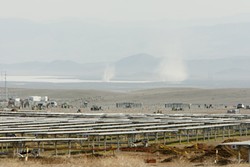 In an area where most people depend so dearly on groundwater, any outside influence on the precious resource is likely to stir problems.

“There’s something fishy going on with the water,” said one resident.

(People familiar with the situation who spoke with New Times asked not to be named for fear of retribution.)

Just months into construction of the California Valley Solar Ranch (owned by NRG Energy, and originally applied for by SunPower) and Topaz Solar Farm (overseen by First Solar, which recently sold the project to Warren Buffet’s MidAmerican Renewables, LLC), there are already issues with the water.

Picture the California Valley divided in half by an imaginary line running north to south near Soda Lake Road. Everything west of that line sits on top of the so-called good water. And everything east of that line is perched atop water so alkaline the rule of thumb is it’s 12-to-1: For every 12 gallons of water treated, you’ll get one gallon of drinkable water, residents say.

The Topaz project sits atop good water, slightly northwest of the area’s community center, while the California Valley Solar Ranch is firmly in 12-to-1 territory.

Because of the prevalence of valley fever in the area, both First Solar and SunPower are required to soak the ground to prevent potentially harmful dust from entering the lungs of nearby residents. According to the Environmental Impact Report for each project, groundwater levels were tested before construction and fully expected to withstand the additional pumping.

Yet SunPower is already experiencing hiccups with its water supply. SLO County officials awarded temporary authorization to the company to use two off-site wells in addition to the two on-site wells originally approved in the EIR. According to the county, SunPower is now trucking water from the “Tab Well” and the “Ruskovich Well,” using an average of 12 trucks per day.

Meanwhile, the company has asked for an “EIR Addendum,” according to the county, in order to “evaluate the additional sources of construction water.”

In other words, the water plan put forward during the review process—the plan on which the project was judged—has changed.

“So there’s all kinds of water coming in because they can’t use that water,” one resident said of the California Valley Solar Ranch changes. “… They’re doing whatever they want, basically.”

The California Valley Solar Ranch requires about 34,867 gallons of water per day over its three-year construction period, according to the project EIR.

SunPower Corporate Communications Director Ingrid Ekstrom couldn’t provide daily averages of its current water use, but told New Times the California Valley Solar Ranch used 18 acre-feet of water from the beginning of September 2011 through the end of January (about 5.8 million gallons in five months). Based on those numbers, SunPower has actually been averaging about 38,000 gallons per day.

“After construction started, the [California Valley Solar Ranch] project determined that additional water supply would facilitate addressing peak construction demand as well as overall project construction,” Ekstrom said. “… The project has temporary approval from the county to use two existing wells, located nearby on CVSR-owned property, on a very limited basis.”

Despite the pending EIR amendment and resident concerns, county officials assure all is still OK for California Valley’s groundwater.

“Recently, current well log data was applied to calibrate the model and confirmed that the safe yield of the basin will not be impacted by the additional extraction requested for the [California Valley Solar Ranch] project,” Senior Environmental Planner John McKenzie said in an e-mail.

According to early studies, the Carrizo Plain Groundwater Basin holds a safe yield of 8,000 to 10,000 acre-feet per year (7.14 million gallons to 8.9 million gallons per day).

Project representatives have also approached nearby property owners to find additional water. However, Ekstrom said it’s a temporary fix and “this would not involve purchasing the long-term water rights to the well.”

On the other side of the valley, there are other questions about First Solar’s water usage. The Topaz project was expected to pull an average of 243,700 gallons per day under its conditional use permit, but company representatives told people at the Feb. 7 California Valley Community Services District meeting that they had county approval to take as much as 800,000 gallons per day, enough water to submerge about 2 1/2 acres with a foot of water.

It all depends on how you calculate the daily usage.

“… thus, that amount, 810,000 [gallons per day], is the constraint on how much water is allowed and could be used for dust mitigation during the peak levels of construction,” Legg said.

According to company monitoring reports, First Solar pumped an average 66,710 gallons per day during the week ending Feb. 26.

Once complete, the Topaz and California Valley Solar Ranch projects will cover about 6,000 acres combined and produce 800 megawatts of power.