When SLO County's public schools first closed in mid-March, Arroyo Grande Mayor Caren Ray Russom knew they might stay that way for the remainder of the school year. As a high school teacher and the mother of a senior at Arroyo Grande High School, she knew what that could mean for the graduating class of 2020. 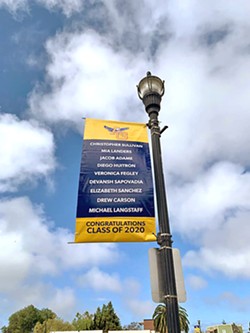 Soon her fears were realized, and all the things that high school graduates normally look forward to—prom, senior night, spring sports, and commencement and all the back patting and celebration that comes with it—suddenly became impossible. For her son, mourning all that's been lost this year hasn't been easy.

So Russom decided to put together something special to celebrate the graduates of 2020, something schools nationwide are trying to do. Central Coast high schools are hosting virtual and drive-by graduation ceremonies, parents and teachers are putting up signs and displays in honor of the class of 2020, and businesses are offering discounts and specials to grads.

The banners, which went up around the village on May 18, were funded entirely by donations of both money and time and include the names and accomplishments of all 466 Arroyo Grande High School students graduating this year. Photos of graduates, teams, and clubs adorn some banners, while others include statistics about the class of 2020, from sports league wins to military and college commitments.

The community response has been intense, Russom said. Just hours after banners were put up, grads and their families were already wandering around the village looking at and taking photos with the banners. They'll be up through the first week of June, when Arroyo Grande is slated to host a drive-through graduation.

"It's been overwhelming," Russom said. "It's hard for me to express how exciting this is."

Laguna Middle School teacher Mila Vujovich-La Barre is organizing a grassroots effort to get a congratulatory sign up in the window or yard of every business and residence from June 1 to June 6. In a press release Vujovich-La Barre sent out on May 18, she wrote that the weeklong celebration would be a way to honor 2020 grads while spreading much-needed cheer countywide.

"This is our tie as residents and business owners of San Luis Obispo County to spread some joy," she wrote.

Although Cal Poly's spring 2020 commencement is postponed and the university has yet to announce any alternate plans, the Political Science Department is doing something of its own to celebrate its grads.

Lilliana Curtis is an administrative support coordinator in Cal Poly's Political Science Department, and at the end of each year she helps organize the annual spring dinner and department commencement ceremony. She was especially disappointed that the dinner had to be canceled this year because it's a great opportunity for graduating students to network with alumni and department heads.

"So it's great for students to connect with these board members so that they have somebody on their sides," Curtis told New Times.

Instead, Curtis is improvising. She's putting together a video montage that will include photos of and statements from all 75 2020 political science grads. She'll send it out to alumni, staff, and students, while grads can send it to their family and friends. It's just a little something, she said, to show the class of 2020 that they haven't been forgotten.

"We really believe that we have stellar students in our program," Curtis said.

• All Good, a Morro Bay-based company that produces and sells body care products, is now offering plant-based hand sanitizer gel and spray to help keep the community safe from COVID-19. The company is also donating bottles of organic lotion and skin relief balm to local doctors and nurses, who may be struggling with dry and cracked hands as a result of increased hand washing. Visit allgoodproducts.com for more info.

• Atascadero's Recreation Division is offering prizes to residents who take 10,000 steps every day for six weeks as part of its new 10,000 Steps a Day Challenge. The challenge is an effort to keep everyone active and healthy during the COVID-19 pandemic. To register visit atascadero.org. Δ