There's a lot of confusion over existing and proposed state protections for struggling renters during the COVID-19 pandemic, and one local advocacy group is pushing San Luis Obispo County to extend its now expired moratorium on evictions.

The SLO County Rent Relief Coalition, a grassroots organization that lobbies for rent and mortgage relief programs and policies at all levels of government, is looking for community members willing to participate in a project in which local faith leaders will be filmed reading anonymous stories from renters about the financial struggles they're facing right now. 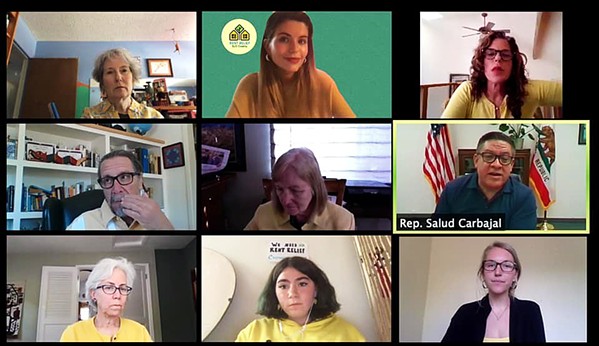 Dona Hare Price, who is heading the project for the coalition, said she hopes the videos will make SLO County's politicians realize that rent relief policies are desperately needed locally.

"They need to get something in place immediately so that we can protect our people," Price told New Times.

SLO County's moratorium on evictions is technically still in effect, but it officially expired on May 31 and its protections will end 90 days after that date, in late August. SLO County Administrator Wade Horton said a local moratorium isn't necessary because of a March 16 order that Gov. Gavin Newsom extended until Sept. 30, allowing local jurisdictions to ban evictions temporarily.

But Price said the state's order only prevents evictions in areas where local jurisdictions have imposed such moratoriums. In a clarification on the various orders regarding eviction, SLO County's website seems to confirm Price's interpretation, and says that the order suspends evictions "where a local government has imposed a limitation on eviction pursuant to the governor's order."

Regardless, Price said confusion surrounding the orders is creating uncertainty.

At the same time, the Rent Relief Coalition is pushing state politicians to support two pieces of proposed state legislation—Assembly Bill 1436 and Senate Bill 1410—that would offer some protections to renters struggling to pay the bills because of COVID-19.

If passed as drafted now, AB 1436 would essentially prevent landlords from evicting tenants for the duration of the coronavirus pandemic, and would give tenants a year after the pandemic's end to repay any debts. SB 1410 would give tax credits to landlords who've given their tenants breaks on rent.

But Price said the fate of all state legislation is especially uncertain right now. A recent coronavirus outbreak among members of the California Legislature put hearings on hold until further notice, and Price said state legislators have yet to agree on whether hearings can be held virtually.

So Price said the coalition is hoping for better local protections.

"We have to help our supervisors realize that this is not just a moral issue, this is really economic recovery," Price said, adding that evictions do lasting damage. An increase in evictions will inevitably lead to more homelessness, she said, a strain on homeless services, and fewer dollars going toward local restaurants and stores. "The economic impact is long-term. [Evictions are] reported and then they can't rent again. It really is a system that is not helpful to people."

That's the trend that Rod Richards, a minister at Unitarian Universalists of San Luis Obispo, has noticed.

For years now Richards' congregation has been running a small program that uses donations to help individuals and families in need with various expenses. A lot of the calls Richards gets, especially recently, are from people who just need help paying rent, putting together money for a security deposit, funding repairs for a car they're living in, or paying for a storage unit for their things while they look for a new place after a recent eviction.

"There are so many people who are on the edge," Richards told New Times, "and [COVID-19] is pushing more people off."

Richards is one of the faith leaders who will be involved in the Rent Relief Coalition's upcoming project.

"Taking care of each other is how we take care of ourselves," he said. Δ